Encyclopedia
John Joseph Montgomery (February 15, 1858 – October 31, 1911) was an aviation
Aviation
Aviation is the design, development, production, operation, and use of aircraft, especially heavier-than-air aircraft. Aviation is derived from avis, the Latin word for bird.-History:...
pioneer, inventor, professor at Santa Clara College
Santa Clara University
Santa Clara University is a private, not-for-profit, Jesuit-affiliated university located in Santa Clara, California, United States. Chartered by the state of California and accredited by the Western Association of Schools and Colleges, it operates in collaboration with the Society of Jesus , whose...
.

On August 28, 1883 he made the first manned, controlled, heavier-than-air flights of the United States
United States
The United States of America is a federal constitutional republic comprising fifty states and a federal district...
, in the Otay Mesa area of San Diego, California
San Diego, California
San Diego is the eighth-largest city in the United States and second-largest city in California. The city is located on the coast of the Pacific Ocean in Southern California, immediately adjacent to the Mexican border. The birthplace of California, San Diego is known for its mild year-round...
(after European pioneers such as George Cayley
George Cayley
Sir George Cayley, 6th Baronet was a prolific English engineer and one of the most important people in the history of aeronautics. Many consider him the first true scientific aerial investigator and the first person to understand the underlying principles and forces of flight...
's coachman in 1853, or Jean-Marie Le Bris
Jean-Marie Le Bris
Jean-Marie Le Bris was a French aviator, born in Concarneau, Brittany, who accomplished a glider flight in December 1856.- Life and works :...
in 1856). Later, in 1905, Montgomery's pilot Daniel Maloney made a series of remarkable flights in the vicinity of Aptos and Santa Clara using tandem wing Montgomery gliders launched from balloons. These flights demonstrated the controllability of the Montgomery design and were the highest flights achieved by man to date. John Montgomery filed for patent on April 26, 1905 (issued U.S. Patent #831,173 on September 18, 1906) for his invention of an aeroplane. He was a member of the Aero Club of Illinois (1910) and member of the research committee of the Technical Board of the Aeronautical Society of New York (1911).

Montgomery died in the crash of his glider
Glider aircraft
Glider aircraft are heavier-than-air craft that are supported in flight by the dynamic reaction of the air against their lifting surfaces, and whose free flight does not depend on an engine. Mostly these types of aircraft are intended for routine operation without engines, though engine failure can...
"The Evergreen" on October 31, 1911 and was buried at Holy Cross Cemetery
Holy Cross Cemetery, Colma
Holy Cross Catholic Cemetery in Colma, California is an American Roman Catholic cemetery operated by the Archdiocese of San Francisco. Established in 1887 on of a former potato farm, it is the oldest and largest cemetery established in Colma to serve the needs of San Francisco...
in Colma, California
Colma, California
Colma is a small incorporated town in San Mateo County, California, at the northern end of the San Francisco Peninsula in the San Francisco Bay Area. The population was 1,792 at the 2010 census. The town was founded as a necropolis in 1924....
on November 3, 1911.

In 1946, John J. Montgomery's life was portrayed in the movie Gallant Journey
Gallant Journey
Gallant Journey is a historical film about early U.S. aeronautical experimenter John Joseph Montgomery. It depicts his efforts to build and fly gliders, from his childhood through to his death in 1911.The chief pilot for the film was Paul Mantz....
starring Glenn Ford
Glenn Ford
Glenn Ford was a Canadian-born American actor from Hollywood's Golden Era with a career that spanned seven decades...
and Janet Blair, and directed by William Wellman. 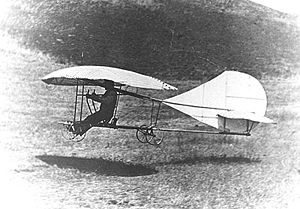 Two California Historical Landmark
California Historical Landmark
California Historical Landmarks are buildings, structures, sites, or places in the state of California that have been determined to have statewide historical significance by meeting at least one of the criteria listed below:...
s (#711: Montgomery Memorial, Otay Mesa(32.577449 -117.052631); #813: Montgomery Hill, San Jose)(37.302289 -121.758084) near Evergreen Valley College
Evergreen Valley College
Evergreen Valley College is a community college located on in the southeastern foothills of San José, Santa Clara County, California. As of Fall 2008, more than 8,000 students from more than 70 countries were enrolled....
have been named in his honor as has one section of the Interstate 5 freeway (John J. Montgomery Freeway) in San Diego, California
San Diego, California
San Diego is the eighth-largest city in the United States and second-largest city in California. The city is located on the coast of the Pacific Ocean in Southern California, immediately adjacent to the Mexican border. The birthplace of California, San Diego is known for its mild year-round...
and a recreation center near the location of his first successful glides (Montgomery-Waller Recreation Center, San Diego, California). The Montgomery Memorial in San Diego features a silver static test wing panel for the B-32 Dominator
B-32 Dominator
The Consolidated B-32 Dominator was a heavy bomber made for United States Army Air Forces during World War II, and has the distinction of being the last Allied aircraft to be engaged in combat during World War II. It was developed in parallel with the Boeing B-29 Superfortress as a fallback design...
mounted upright that is visible for miles.
California schools that have been named in his honor:

On March 15, 2008, a sculpture was unveiled at San Felipe and Yerba Buena roads in San Jose, California
San Jose, California
San Jose is the third-largest city in California, the tenth-largest in the U.S., and the county seat of Santa Clara County which is located at the southern end of San Francisco Bay...
as a tribute to the pioneering aviation accomplishments of John Montgomery. The 30-foot-tall steel structure of a glider wing was placed on a 32-foot-diameter plaza designed by San Francisco artist Kent Roberts.