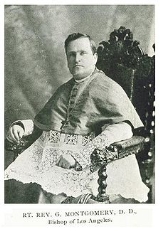 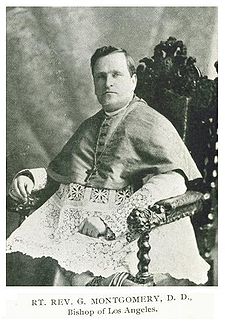 Bishop Montgomery was born in Saint Lawrence, Kentucky
Kentucky
The Commonwealth of Kentucky is a state located in the East Central United States of America. As classified by the United States Census Bureau, Kentucky is a Southern state, more specifically in the East South Central region. Kentucky is one of four U.S. states constituted as a commonwealth...
. He was ordained a priest
Priest
A priest is a person authorized to perform the sacred rites of a religion, especially as a mediatory agent between humans and deities. They also have the authority or power to administer religious rites; in particular, rites of sacrifice to, and propitiation of, a deity or deities...
in December 1879 and became a bishop
Bishop
A bishop is an ordained or consecrated member of the Christian clergy who is generally entrusted with a position of authority and oversight. Within the Catholic Church, Eastern Orthodox, Oriental Orthodox Churches, in the Assyrian Church of the East, in the Independent Catholic Churches, and in the...
in January 1894. He assisted his predecessor (Bishop Francisco Mora y Borrell
Francisco Mora y Borrell
Francisco Mora i Borrell was a Catalan American Roman Catholic priest, serving as the Bishop of Monterey-Los Angeles from 1878 to 1896.Francisco Mora was born in Gurb , Spain on November 25, 1827...
) as coadjutor of what was then referred to as the Diocese of Monterey-Los Angeles, and became the ordinary
Ordinary
In those hierarchically organised churches of Western Christianity which have an ecclesiastical law system, an ordinary is an officer of the church who by reason of office has ordinary power to execute the church's laws...
of the diocese when Mora retired in May 1896. During his term Bishop Montgomery faced significant bigotry, but he proved to be both a capable church and civic leader. Among other contributions, he demanded that government recognize the right of parents to send their children to schools of their choice. Bishop Montgomery High School
Bishop Montgomery High School
Bishop Montgomery High School is a Catholic high school serving twenty-five parishes in the Roman Catholic Archdiocese of Los Angeles. BMHS was founded in 1957, and staffed by the Sisters of St. Joseph of Carondelet, Conventual Franciscans, and lay faculty...
in Torrance, California
Torrance, California
Torrance is a city incorporated in 1921 and located in the South Bay region of Los Angeles County, California, United States. Torrance has of shore-front beaches on the Pacific Ocean, quieter and less well-known by tourists than others on the Santa Monica Bay, such as those of neighboring...
is named in his honor. Bishop Montgomery was a relative of Zachariah Montgomery
Zachariah Montgomery
Zachariah "Zach" Montgomery was a publisher, lawyer, politician, and author, particularly known for his skills as an orator....
and noted aviation pioneer John J. Montgomery
John J. Montgomery
John Joseph Montgomery was an aviation pioneer, inventor, professor at Santa Clara College.On August 28, 1883 he made the first manned, controlled, heavier-than-air flights of the United States, in the Otay Mesa area of San Diego, California...
who both also lived in California.