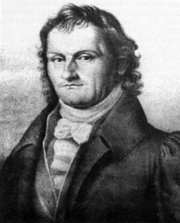 Johann Gottlob Theaenus Schneider (18 January 1750–12 January 1822) was a German
German Empire
The German Empire refers to Germany during the "Second Reich" period from the unification of Germany and proclamation of Wilhelm I as German Emperor on 18 January 1871, to 1918, when it became a federal republic after defeat in World War I and the abdication of the Emperor, Wilhelm II.The German...
classicist and naturalist
Natural history
Natural history is the scientific research of plants or animals, leaning more towards observational rather than experimental methods of study, and encompasses more research published in magazines than in academic journals. Grouped among the natural sciences, natural history is the systematic study...
.

Schneider was born at Collm in Saxony
Saxony
The Free State of Saxony is a landlocked state of Germany, contingent with Brandenburg, Saxony Anhalt, Thuringia, Bavaria, the Czech Republic and Poland. It is the tenth-largest German state in area, with of Germany's sixteen states....
. In 1774, on the recommendation of Christian Gottlob Heine, he became secretary to the famous Strasbourg scholar Richard François Brunck, and in 1811 became professor of ancient languages and eloquence at Breslau (chief librarian, 1816) where he died in 1822.

Of his numerous works the most important was his Kritisches griechisch-deutsches Handwörterbuch (1797–1798), the first independent work of the kind since Stephanus's Thesaurus, and the basis of F. Passow
Franz Passow
Franz Ludwig Carl Friedrich Passow was a German classical scholar and lexicographer.He was born at Ludwigslust in Mecklenburg-Schwerin...
's and all succeeding Greek lexicons (including, therefore, the contemporary standard A Greek-English Lexicon). A special improvement was the introduction of words and expressions connected with natural history and science.

In 1801 he corrected and expanded re-published Marcus Elieser Bloch
Marcus Elieser Bloch
Marcus Elieser Bloch was a German medical doctor and naturalist. He is generally considered one of the most important ichthyologists of the 18th century.- Life :...
's Systema Ichthyologiae iconibus cx illustratum, a famous catalog of fish
Fish
Fish are a paraphyletic group of organisms that consist of all gill-bearing aquatic vertebrate animals that lack limbs with digits. Included in this definition are the living hagfish, lampreys, and cartilaginous and bony fish, as well as various extinct related groups...
es with beautiful illustrations that is cited (as Bloch and Schneider, 1801) as the taxonomy authority for many species
Species
In biology, a species is one of the basic units of biological classification and a taxonomic rank. A species is often defined as a group of organisms capable of interbreeding and producing fertile offspring. While in many cases this definition is adequate, more precise or differing measures are...
of fish.

The scientific writings of ancient authors especially attracted him. He published editions of Aelian
Claudius Aelianus
Claudius Aelianus , often seen as just Aelian, born at Praeneste, was a Roman author and teacher of rhetoric who flourished under Septimius Severus and probably outlived Elagabalus, who died in 222...
, De natura animalium; Nicander
Nicander
Nicander of Colophon , Greek poet, physician and grammarian, was born at Claros, , near Colophon, where his family held the hereditary priesthood of Apollo. He flourished under Attalus III of Pergamum.He wrote a number of works both in prose and verse, of which two survive complete...
, Alexipharmaca and Theriaca; the Scriptores rei rusticae; Aristotle
Aristotle
Aristotle was a Greek philosopher and polymath, a student of Plato and teacher of Alexander the Great. His writings cover many subjects, including physics, metaphysics, poetry, theater, music, logic, rhetoric, linguistics, politics, government, ethics, biology, and zoology...
, Historia animalium and Politica; Epicurus
Epicurus
Epicurus was an ancient Greek philosopher and the founder of the school of philosophy called Epicureanism.Only a few fragments and letters remain of Epicurus's 300 written works...
, Physica and Meteorologica; Theophrastus
Theophrastus
Theophrastus , a Greek native of Eresos in Lesbos, was the successor to Aristotle in the Peripatetic school. He came to Athens at a young age, and initially studied in Plato's school. After Plato's death he attached himself to Aristotle. Aristotle bequeathed to Theophrastus his writings, and...
, Eclogae physicae; Oppian
Oppian
Oppian or Oppianus was the name of the authors of two didactic poems in Greek hexameters, formerly identified, but now generally regarded as two different persons: Oppian of Corycus in Cilicia; and Oppian of Apamea in Syria.-Oppian of Corycus:Oppian of Corycus in Cilicia, who flourished in the...
, Halieutica and Cynegetica; the complete works of Xenophon
Xenophon
Xenophon , son of Gryllus, of the deme Erchia of Athens, also known as Xenophon of Athens, was a Greek historian, soldier, mercenary, philosopher and a contemporary and admirer of Socrates...
and Vitruvius
Vitruvius
Marcus Vitruvius Pollio was a Roman writer, architect and engineer, active in the 1st century BC. He is best known as the author of the multi-volume work De Architectura ....
; the Argonautica of the so-called Orpheus (for which Ruhnken
David Ruhnken
David Ruhnken was a Dutch classical scholar of German origin.-Origins:Ruhnken was born in Bedlin near Stolp, Pomerania Province,...
nicknamed him "Orpheomastix"); an essay on the life and writings of Pindar
Pindar
Pindar , was an Ancient Greek lyric poet. Of the canonical nine lyric poets of ancient Greece, his work is the best preserved. Quintilian described him as "by far the greatest of the nine lyric poets, in virtue of his inspired magnificence, the beauty of his thoughts and figures, the rich...
and a collection of his fragments. His Eclogae physicae is a selection of extracts of various length from Greek and Latin writers on scientific subjects, containing the original text and commentary, with essays on natural history and science in ancient times.
The source of this article is wikipedia, the free encyclopedia.  The text of this article is licensed under the GFDL.