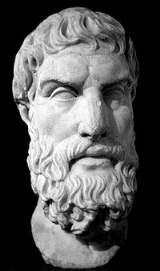 Overview
Epicurus was an ancient Greek philosopher
Greek philosophy
Ancient Greek philosophy arose in the 6th century BCE and continued through the Hellenistic period, at which point Ancient Greece was incorporated in the Roman Empire...
and the founder of the school of philosophy called Epicureanism
Epicureanism
Epicureanism is a system of philosophy based upon the teachings of Epicurus, founded around 307 BC. Epicurus was an atomic materialist, following in the steps of Democritus. His materialism led him to a general attack on superstition and divine intervention. Following Aristippus—about whom...
.
Only a few fragments and letters remain of Epicurus's 300 written works. Much of what is known about Epicurean philosophy derives from later followers and commentators.

For Epicurus, the purpose of philosophy was to attain the happy, tranquil life, characterized by ataraxia
Ataraxia
Ataraxia is a Greek term used by Pyrrho and Epicurus for a lucid state, characterized by freedom from worry or any other preoccupation.For the Epicureans, ataraxia was synonymous with the only true happiness possible for a person...
—peace and freedom from fear—and aponia
Aponia
Aponia means the absence of pain, and was regarded by the Epicureans to be the height of bodily pleasure.As with the other Hellenistic schools of philosophy, the Epicureans believed that the goal of human life is happiness...
—the absence of pain—and by living a self-sufficient life surrounded by friends.
He taught that pleasure and pain are the measures of what is good and evil, that death is the end of the body and the soul and should therefore not be feared, that the gods do not reward or punish humans, that the universe is infinite and eternal, and that events in the world are ultimately based on the motions and interactions of atoms
Atomism
Atomism is a natural philosophy that developed in several ancient traditions. The atomists theorized that the natural world consists of two fundamental parts: indivisible atoms and empty void.According to Aristotle, atoms are indestructible and immutable and there are an infinite variety of shapes...
moving in empty space.
His parents, Neocles and Chaerestrate, both Athenian-born, and his father a citizen, had emigrated to the Athenian settlement on the Aegean
Aegean Sea
The Aegean Sea[p] is an elongated embayment of the Mediterranean Sea located between the southern Balkan and Anatolian peninsulas, i.e., between the mainlands of Greece and Turkey. In the north, it is connected to the Marmara Sea and Black Sea by the Dardanelles and Bosporus...
island of Samos
Samos Island
Samos is a Greek island in the eastern Aegean Sea, south of Chios, north of Patmos and the Dodecanese, and off the coast of Asia Minor, from which it is separated by the -wide Mycale Strait. It is also a separate regional unit of the North Aegean region, and the only municipality of the regional...
about ten years before Epicurus's birth in February 341 BCE.

Where did he live?
More

Luxurious food and drinks, in no way protect you from harm. Wealth beyond what is natural, is no more use than an overflowing container. Real value is not generated by theaters, and baths, perfumes or ointments, but by philosophy.

Don't fear god,Don't worry about death;What is good is easy to get, andWhat is terrible is easy to endure.

The "Tetrapharmakos|Tetrapharmakos" [τετραφάρμακος], or "The four-part cure" of Epicurus, from the "Herculaneum|Herculaneum Papyrus", 1005, 4.9-14 of Philodemus|Philodemus, as translated in The Epicurus Reader: Selected Writings and Testimonia (1994) edited by D. S. Hutchinson, p. vi

No pleasure is in itself evil, but the things which produce certain pleasures entail annoyances many times greater than the pleasures themselves. (8)

Variant translation: No pleasure is itself a bad thing, but the things that produce some kinds of pleasure, bring along with them unpleasantness that is much greater than the pleasure itself.

Chance seldom interferes with the wise man; his greatest and highest interests have been, are, and will be, directed by reason throughout his whole life. (16).