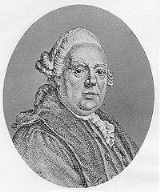 Encyclopedia
David Ruhnken was a Dutch
Netherlands
The Netherlands is a constituent country of the Kingdom of the Netherlands, located mainly in North-West Europe and with several islands in the Caribbean. Mainland Netherlands borders the North Sea to the north and west, Belgium to the south, and Germany to the east, and shares maritime borders...
classical scholar of German origin.

Ruhnken was born in Bedlin
Bydlino
Bydlino is a village in the administrative district of Gmina Słupsk, within Słupsk County, Pomeranian Voivodeship, in northern Poland. It lies approximately north of Słupsk and west of the regional capital Gdańsk ....
(today Bydlino) near Stolp, Pomerania Province, (today Słupsk, Poland
Poland
Poland , officially the Republic of Poland , is a country in Central Europe bordered by Germany to the west; the Czech Republic and Slovakia to the south; Ukraine, Belarus and Lithuania to the east; and the Baltic Sea and Kaliningrad Oblast, a Russian exclave, to the north...
). After he had attended Latin school at Königsberg
Königsberg
Königsberg was the capital of East Prussia from the Late Middle Ages until 1945 as well as the northernmost and easternmost German city with 286,666 inhabitants . Due to the multicultural society in and around the city, there are several local names for it...
(1737–1741), his parents wanted him to go in for the church, but after two years at the University of Wittenberg he determined to live the life of a scholar. At Wittenberg, Ruhnken lived in close intimacy with the two most distinguished professors, Heinrich Ritter
Heinrich Ritter
Heinrich Ritter was a German philosopher.He was born at Zerbst, and studied philosophy and theology at Göttingen and Berlin until 1815. In 1824 he became extraordinary professor of philosophy at Berlin, later transferring to Kiel, where he occupied the chair of philosophy from 1833 to 1837...
and Berger
Berger
- People :Berger is a relatively common last name. It means mountaineer in German, and shepherd in French. The pronunciation of the English name is . Notable people by that name include:-Politics:*James S. Berger , U.S...
. To them he owed a thorough grounding in ancient history and Roman antiquities and literature; and from them he learned a pure and vivid Latin style. At Wittenberg, Ruhnken also derived valuable mental training from studying mathematics
Mathematics
Mathematics is the study of quantity, space, structure, and change. Mathematicians seek out patterns and formulate new conjectures. Mathematicians resolve the truth or falsity of conjectures by mathematical proofs, which are arguments sufficient to convince other mathematicians of their validity...
and Roman law
Roman law
Roman law is the legal system of ancient Rome, and the legal developments which occurred before the 7th century AD — when the Roman–Byzantine state adopted Greek as the language of government. The development of Roman law comprises more than a thousand years of jurisprudence — from the Twelve...
.

The only thing that made him want to leave Wittenberg was a desire to explore Greek literature
Greek literature
Greek literature refers to writings composed in areas of Greek influence, typically though not necessarily in one of the Greek dialects, throughout the whole period in which the Greek-speaking people have existed.-Ancient Greek literature :...
. Neither at Wittenberg nor at any other German university was Greek being seriously studied at the time. It was taught to students in divinity for the sake of the Greek New Testament
New Testament
The New Testament is the second major division of the Christian biblical canon, the first such division being the much longer Old Testament....
and the early fathers of the church
Church Fathers
The Church Fathers, Early Church Fathers, Christian Fathers, or Fathers of the Church were early and influential theologians, eminent Christian teachers and great bishops. Their scholarly works were used as a precedent for centuries to come...
. Friedrich August Wolf
Friedrich August Wolf
Friedrich August Wolf was a German philologist and critic.He was born at Hainrode, a village not far from Nordhausen, Germany. His father was the village schoolmaster and organist...
was the real creator of Greek scholarship in modern Germany, and Richard Porson
Richard Porson
Richard Porson was an English classical scholar. He was the discoverer of Porson's Law; and the Greek typeface Porson was based on his handwriting.-Early life:...
's gibe that "the Germans in Greek are sadly to seek" had some truth in it.

Ruhnken followed the advice of his friends at Wittenberg and early in 1744 went to the University of Leiden, where, stimulated by the influence of Richard Bentley
Richard Bentley
Richard Bentley was an English classical scholar, critic, and theologian. He was Master of Trinity College, Cambridge....
, Tiberius Hemsterhuis
Tiberius Hemsterhuis
Tiberius Hemsterhuis was a Dutch philologist and critic.-Life:He was born in Groningen. His father, a learned physician, gave him a good early education and he entered the university of his native city in his fifteenth year, where he proved himself the best student of mathematics...
had founded the only real school of Greek learning on the Continent since the days of Joseph Justus Scaliger
Joseph Justus Scaliger
Joseph Justus Scaliger was a French religious leader and scholar, known for expanding the notion of classical history from Greek and Ancient Roman history to include Persian, Babylonian, Jewish and Ancient Egyptian history.-Early life:He was born at Agen, the tenth child and third son of Italian...
and Isaac Casaubon
Isaac Casaubon
Isaac Casaubon was a classical scholar and philologist, first in France and then later in England, regarded by many of his time as the most learned in Europe.-Early life:...
. Hemsterhuis and Ruhnken were close friends during the twenty-three years between Ruhnken's arrival in the Netherlands in 1743 and the death of Hemsterhuis in 1766. Ruhnken and Valckenaer were the two pupils of the great master on whom his inheritance must devolve.

As Ruhnken's reputation spread, many efforts were made to attract him back to Germany, but after settling in Leiden, he only left the country once, when he spent a year in Paris, ransacking the public libraries (1755). For work achieved, this year of Ruhnken may compare even with the famous year which Ritschl
Albrecht Ritschl
Albrecht Ritschl was a German theologian.Starting in 1852, Ritschl lectured on "Systematic Theology". According to this system, faith was understood to be irreducible to other experiences, beyond the scope of reason. Faith, he said, came not from facts but from value judgments...
spent in Italy
Italy
Italy , officially the Italian Republic languages]] under the European Charter for Regional or Minority Languages. In each of these, Italy's official name is as follows:;;;;;;;;), is a unitary parliamentary republic in South-Central Europe. To the north it borders France, Switzerland, Austria and...
.

In 1757 Ruhnken was appointed lecturer in Greek, to assist Hemsterhuis, and in 1761 he succeeded Oudendorp, with the title of "ordinary professor of history and eloquence", as Latin professor. This promotion attracted the enmity of some native Netherlanders, who deemed themselves more worthy of the chair of Latin. Ruhnken's defence was to publish works on Latin literature
Latin literature
Latin literature includes the essays, histories, poems, plays, and other writings of the ancient Romans. In many ways, it seems to be a continuation of Greek literature, using many of the same forms...
which eclipsed and silenced his rivals.

In 1766 Valckenaer succeeded Hemsterhuis in the Greek chair. The intimacy between the two colleagues was only broken by Valckenaer's death in 1785, and stood the test of common candidature for the office (an important one at Leiden) of 12th Librarian of Leiden University
Leiden University Library
Leiden University Library is a library founded in 1575 in Leiden, Netherlands. It is regarded as a significant place in the development of European culture: it is a part of a small number of cultural centres that gave direction to the development and spread of knowledge during the Enlightenment...
, in which Ruhnken was successful. Ruhnken's later years were clouded by severe domestic misfortune, and by the political commotions which, after the outbreak of the war with England
Fourth Anglo-Dutch War
The Fourth Anglo–Dutch War was a conflict between the Kingdom of Great Britain and the Dutch Republic. The war, tangentially related to the American Revolutionary War, broke out over British and Dutch disagreements on the legality and conduct of Dutch trade with Britain's enemies in that...
in 1780, troubled the Netherlands without ceasing, and threatened to extinguish the University of Leiden.

Soon after his Ruhnken's death, his pupil Wyttenbach
Daniel Albert Wyttenbach
Daniel Albert Wyttenbach was a German Swiss classical scholar. A student of Hemsterhuis, Valckenaer and Ruhnken, he was an exponent of the methods of criticism which they established, and with them he laid the foundations of modern Greek scholarship.-Early life:He was born at Bern, of a noble...
wrote his biography. He wrote that Ruhnken was not a recluse or a pedant, but was sociable and cared nothing for rank. Wyttenbach said of him in his early days that he knew how to sacrifice to the Siren
Siren
In Greek mythology, the Sirens were three dangerous mermaid like creatures, portrayed as seductresses who lured nearby sailors with their enchanting music and voices to shipwreck on the rocky coast of their island. Roman poets placed them on an island called Sirenum scopuli...
s without proving traitor to the Muses. Life in the open air had a great attraction for him; he was fond of sport, and would sometimes devote to it two or three days in the week. In his bearing towards other scholars Ruhnken was generous and dignified, distributing literary aid with a free hand, and meeting onslaughts for the most part with a smile. In the records of learning he occupies an important position, as a principal link in the chain which connects Bentley with the modern scholarship of the European Continent. The spirit and the aims of Hemsterhuis, the great reviver of Continental learning, were committed to his trust, and were faithfully maintained. He greatly widened the circle of those who valued taste and precision in classical scholarship. He powerfully aided the emancipation of Greek studies from theology. Ruhnken was one of the first scholars of the 18th century to study and interpret Plato's writings in ancient Greek rather than interpreting Plato's works through the prisms of translations by others.

Ruhnken’s principal works are editions of:

He also occupied himself much with the history of Greek literature, particularly the oratorical literature, with the Homer
Homer
In the Western classical tradition Homer , is the author of the Iliad and the Odyssey, and is revered as the greatest ancient Greek epic poet. These epics lie at the beginning of the Western canon of literature, and have had an enormous influence on the history of literature.When he lived is...
ic hymns, the scholia or, Plato and the Greek and Roman grammarians and rhetoric
Rhetoric
Rhetoric is the art of discourse, an art that aims to improve the facility of speakers or writers who attempt to inform, persuade, or motivate particular audiences in specific situations. As a subject of formal study and a productive civic practice, rhetoric has played a central role in the Western...
ians. A discovery famous in its time was that in the text of the work of Apsines
Apsines
Apsines of Gadara was a Greek rhetorician. He studied at Smyrna and taught at Athens, gaining such a reputation that he was raised to the consulship by the emperor Maximinus...
on rhetoric a large piece of a work by Longinus
Longinus (literature)
Longinus is the conventional name of the author of the treatise, On the Sublime , a work which focuses on the effect of good writing. Longinus, sometimes referred to as Pseudo-Longinus because his real name is unknown, was a Greek teacher of rhetoric or a literary critic who may have lived in the...
was embedded. Modern views of the writings attributed to Longinus have lessened the interest of this discovery without lessening its merit.
The source of this article is wikipedia, the free encyclopedia.  The text of this article is licensed under the GFDL.