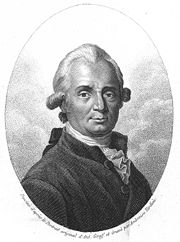 Marcus Elieser Bloch was a German
Germany
Germany , officially the Federal Republic of Germany , is a federal parliamentary republic in Europe. The country consists of 16 states while the capital and largest city is Berlin. Germany covers an area of 357,021 km2 and has a largely temperate seasonal climate...
medical doctor and naturalist
Naturalist
Naturalist may refer to:* Practitioner of natural history* Conservationist* Advocate of naturalism * Naturalist , autobiography-See also:* The American Naturalist, periodical* Naturalism...
. He is generally considered one of the most important ichthyologist
Ichthyology
Ichthyology is the branch of zoology devoted to the study of fish. This includes skeletal fish , cartilaginous fish , and jawless fish...
s of the 18th century.

Bloch was born at Ansbach
Ansbach
Ansbach, originally Onolzbach, is a town in Bavaria, Germany. It is the capital of the administrative region of Middle Franconia. Ansbach is situated southwest of Nuremberg and north of Munich, on the Fränkische Rezat, a tributary of the Main river. As of 2004, its population was 40,723.Ansbach...
in 1723. His parents, being very poor, gave him hardly any education, so that on arriving at manhood he was almost illiterate, and till the age of nineteen could not even read German
German language
German is a West Germanic language, related to and classified alongside English and Dutch. With an estimated 90 – 98 million native speakers, German is one of the world's major languages and is the most widely-spoken first language in the European Union....
. Some knowledge of Hebrew and rabbinical literature enabled him, however, to obtain a teacher's position in the house of a Jewish surgeon in Hamburg
Hamburg
-History:The first historic name for the city was, according to Claudius Ptolemy's reports, Treva.But the city takes its modern name, Hamburg, from the first permanent building on the site, a castle whose construction was ordered by the Emperor Charlemagne in AD 808...
. Here he learned German thoroughly and mastered some Latin
Latin
Latin is an Italic language originally spoken in Latium and Ancient Rome. It, along with most European languages, is a descendant of the ancient Proto-Indo-European language. Although it is considered a dead language, a number of scholars and members of the Christian clergy speak it fluently, and...
, taking up also the study of anatomy
Anatomy
Anatomy is a branch of biology and medicine that is the consideration of the structure of living things. It is a general term that includes human anatomy, animal anatomy , and plant anatomy...
. Scientific enthusiasm being thus aroused, Bloch went to Berlin
Berlin
Berlin is the capital city of Germany and is one of the 16 states of Germany. With a population of 3.45 million people, Berlin is Germany's largest city. It is the second most populous city proper and the seventh most populous urban area in the European Union...
, where, with remarkable zeal, he devoted himself to the study of all branches of natural science and medicine, being supported by some relatives. After taking the degree of M.D. at Frankfort-on-the-Oder in 1747, he settled in Berlin. He died in Carlsbad
Karlovy Vary
Karlovy Vary is a spa city situated in western Bohemia, Czech Republic, on the confluence of the rivers Ohře and Teplá, approximately west of Prague . It is named after King of Bohemia and Holy Roman Emperor Charles IV, who founded the city in 1370...
on August 6, 1799.

Bloch is best known for his encyclopedic work in ichthyology
Ichthyology
Ichthyology is the branch of zoology devoted to the study of fish. This includes skeletal fish , cartilaginous fish , and jawless fish...
. Between 1782 and 1795 he published his Allgemeine Naturgeschichte der Fische, a 12-volume, beautifully illustrated comprehensive work on fish
Fish
Fish are a paraphyletic group of organisms that consist of all gill-bearing aquatic vertebrate animals that lack limbs with digits. Included in this definition are the living hagfish, lampreys, and cartilaginous and bony fish, as well as various extinct related groups...
es. The first three volumes describe fishes in Germany
Germany
Germany , officially the Federal Republic of Germany , is a federal parliamentary republic in Europe. The country consists of 16 states while the capital and largest city is Berlin. Germany covers an area of 357,021 km2 and has a largely temperate seasonal climate...
and were entitled Oeconomische Naturgeschichte der Fische Deutschlands, the remaining volumes dealt with fishes from other parts of the world and were entitled Naturgeschichte der ausländischen Fische.