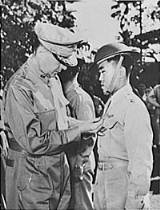 Encyclopedia
Jesús Antonio Villamor was a Filipino
Philippines
The Philippines , officially known as the Republic of the Philippines , is a country in Southeast Asia in the western Pacific Ocean. To its north across the Luzon Strait lies Taiwan. West across the South China Sea sits Vietnam...
pilot who fought the Japan
Japan
Japan is an island nation in East Asia. Located in the Pacific Ocean, it lies to the east of the Sea of Japan, China, North Korea, South Korea and Russia, stretching from the Sea of Okhotsk in the north to the East China Sea and Taiwan in the south...
ese in World War II
World War II
World War II, or the Second World War , was a global conflict lasting from 1939 to 1945, involving most of the world's nations—including all of the great powers—eventually forming two opposing military alliances: the Allies and the Axis...
.

Villamor was one of seven children. He studied commerce
Commerce
While business refers to the value-creating activities of an organization for profit, commerce means the whole system of an economy that constitutes an environment for business. The system includes legal, economic, political, social, cultural, and technological systems that are in operation in any...
at De La Salle College
De La Salle University-Manila
De La Salle University is a private Lasallian university in Malate, Manila, Philippines. It was founded in 1911 by De La Salle Brothers as the De La Salle College in Paco, Manila with Blimond Pierre serving as its first director...
(now DLSU-Manila) in Manila
Manila
Manila is the capital of the Philippines. It is one of the sixteen cities forming Metro Manila.Manila is located on the eastern shores of Manila Bay and is bordered by Navotas and Caloocan to the north, Quezon City to the northeast, San Juan and Mandaluyong to the east, Makati on the southeast,...
, hoping to pursue a business career.

During summer, he and his family went to Baguio and stayed in one of the government houses on Hogan's Alley, which are now assigned to Justice of Court of Appeals, just below Cabinet Hill along Leonard Wood Road. One of his playmates during this time was Roberto Lim, son of Brigadier General Vicente Lim
Vicente Lim
Brigadier General Vicente Lim was an Filipino General in the Philippine Army who served during the Second World War.-Early life:He was born in the town of Calamba, Laguna, on the 24th of February, 1888, the third of Jose Ayala Lim-Yaoco’s four children. His father was a full-blooded Chinese who...
.

Jess (as one of his friends would call him), at the age of 14 to 15, was already an aviation bug. He was worried that because of his short height, he wouldn't pass the physical exam. He learned how to fly in the civilian flying school in Grace Park that was located next to La Loma cemetery. Roberto Lim took his first airpline ride with Jess in a Stearman plane. He also signed Roberto Lim's first civilian license.

Upon his return to the Philippines, Villamor was assigned to lead the 6th Pursuit Squadron (now 6th Tactical Fighter Squadron) shortly before the Japanese invasion of the Philippines in December 1941. In the skies above Zablan and Batangas
Batangas
Batangas is a first class province of the Philippines located on the southwestern part of Luzon in the CALABARZON region. Its capital is Batangas City and it is bordered by the provinces of Cavite and Laguna to the north and Quezon to the east. Across the Verde Island Passages to the south is the...
Fields, against Japanese
Empire of Japan
The Empire of Japan is the name of the state of Japan that existed from the Meiji Restoration on 3 January 1868 to the enactment of the post-World War II Constitution of...
Zeros
A6M Zero
The Mitsubishi A6M Zero was a long-range fighter aircraft operated by the Imperial Japanese Navy Air Service from 1940 to 1945. The A6M was designated as the , and also designated as the Mitsubishi A6M Rei-sen and Mitsubishi Navy 12-shi Carrier Fighter. The A6M was usually referred to by the...
, his squadron of P-26
P-26 Peashooter
The American Boeing P-26 Peashooter, was the first all-metal production fighter aircraft and the first pursuit monoplane used by the United States Army Air Corps...
fighters engaged the enemy. Despite the disadvantage, Villamor and his squadron was credited with four kills- one Mitsubishi G3M bomber and three Mitsubishi A6M Zeros. Two of them were personally shot down by Villamor himself.

After his squadron was destroyed, Villamor continued his war against the Japanese as an intelligence officer. On December 27, 1942 Villamor was part of a team inserted by the submarine USS Gudgeon (SS-211)
USS Gudgeon (SS-211)
USS Gudgeon , a Tambor-class submarine, was the first ship of the United States Navy to be named for the gudgeon). Her keel was laid down by the Mare Island Navy Yard. She was launched on 25 January 1941, sponsored by Mrs. William S. Pye, and commissioned on 21 April 1941 with Lieutenant Commander...
into the Philippines. Establishing a chain of direct communication from the Philippines with General Douglas MacArthur
Douglas MacArthur
General of the Army Douglas MacArthur was an American general and field marshal of the Philippine Army. He was a Chief of Staff of the United States Army during the 1930s and played a prominent role in the Pacific theater during World War II. He received the Medal of Honor for his service in the...
in Australia
Australia
Australia , officially the Commonwealth of Australia, is a country in the Southern Hemisphere comprising the mainland of the Australian continent, the island of Tasmania, and numerous smaller islands in the Indian and Pacific Oceans. It is the world's sixth-largest country by total area...
, he coordinated the activities of various guerrilla movements in Luzon
Luzon
Luzon is the largest island in the Philippines. It is located in the northernmost region of the archipelago, and is also the name for one of the three primary island groups in the country centered on the Island of Luzon...
, Mindanao
Mindanao
Mindanao is the second largest and easternmost island in the Philippines. It is also the name of one of the three island groups in the country, which consists of the island of Mindanao and smaller surrounding islands. The other two are Luzon and the Visayas. The island of Mindanao is called The...
and the Visayas
Visayas
The Visayas or Visayan Islands and locally known as Kabisay-an gid, is one of the three principal geographical divisions of the Philippines, along with Mindanao and Luzon. It consists of several islands, primarily surrounding the Visayan Sea, although the Visayas are considered the northeast...
. Villamor acted as the "clearing house" for information, which helped the United States Armed Forces in the Far East (USAFFE) to map out a strategy to liberate the Philippines.