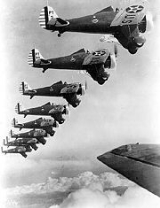 The Boeing
Boeing
The Boeing Company is an American multinational aerospace and defense corporation, founded in 1916 by William E. Boeing in Seattle, Washington. Boeing has expanded over the years, merging with McDonnell Douglas in 1997. Boeing Corporate headquarters has been in Chicago, Illinois since 2001...
-funded project to produce the Boeing Model 248 began in September 1931, with the Army Air Corps supplying engines and instruments. The design—which included an open cockpit, fixed landing gear and externally braced wings—was the last such design procured by the USAAC as a fighter aircraft. The Model 248 had a high landing speed, which caused a number of accidents; to remedy this, flap
Flap (aircraft)
Flaps are normally hinged surfaces mounted on the trailing edges of the wings of a fixed-wing aircraft to reduce the speed an aircraft can be safely flown at and to increase the angle of descent for landing without increasing air speed. They shorten takeoff and landing distances as well as...
s were fitted to reduce the landing speed. The Army Air Corps contracted for three prototypes, designated XP-936, with the first flight on 20 March 1932.

The Boeing XP-936 was still tricky to land, however; occasionally, it would flip forward, and because of the short nose it tended to roll onto its back, injuring a number of pilots. The prototype's unarmored headrest offered virtually no protection in such instances; as a result, production Model 266s (P-26As) had a taller, armored headrest fitted.

The diminutive "Peashooter"—as it became affectionately known by service pilots—was faster than previous American combat aircraft, but it was also an anachronism; its wire-braced
Flying wires
The flying wires of an aircraft work in conjunction with other wing components such as spars and interplane struts to transmit flight loads. Most commonly used on biplane aircraft they are also used on monoplanes and triplanes.-Purpose:...
wings, fixed landing gear and open cockpit were outdated design features. In Europe, the Messerschmitt Bf 109
Messerschmitt Bf 109
The Messerschmitt Bf 109, often called Me 109, was a German World War II fighter aircraft designed by Willy Messerschmitt and Robert Lusser during the early to mid 1930s...
and Hawker Hurricane
Hawker Hurricane
The Hawker Hurricane is a British single-seat fighter aircraft that was designed and predominantly built by Hawker Aircraft Ltd for the Royal Air Force...
—with enclosed cockpits, retractable landing gear and monocoque wings—both flew for the first time in 1935 and were more representative of contemporary monoplane fighter designs. However, the P-26 was easy to fly, and it remained in service until the U.S. entered World War II.

Deliveries to USAAC pursuit squadrons began in December 1933 with the last production aircraft in the series coming off the assembly line in 1936, designated the P-26C. Ultimately, 22 squadrons flew the Peashooter, with peak service being six squadrons in 1936. P-26s were the front line fighters of the USAAC until 1938, when Seversky P-35
Seversky P-35
The Seversky P-35 was a fighter aircraft built in the United States by the Seversky Aircraft Company in the late 1930s. A contemporary of the Hawker Hurricane and Messerschmitt Bf 109, the P-35 was the first single-seat fighter in U.S...
s and Curtiss P-36s began to replace it. A total of 20 P-26s were lost in accidents between 1934 and the start of World War II, but only five before 1940.

Air Corps units using the P-26 were the:

Between 1938 and 1940, P-26s were assigned overseas to supplement Seversky P-35s in two defense units based at Wheeler Field, Territory of Hawaii
Hawaii
Hawaii is the newest of the 50 U.S. states , and is the only U.S. state made up entirely of islands. It is the northernmost island group in Polynesia, occupying most of an archipelago in the central Pacific Ocean, southwest of the continental United States, southeast of Japan, and northeast of...
:

The first Boeing P-26 to experience major combat operation was the Chinese Model 281. On 15 August 1937, eight P-26s from the Chinese Air Force
Chinese Air Force
The phrase Chinese Air Force may refer to one of two modern bodies; a third historical unit can also be referred to as a part:*Republic of China Air Force: The air force of China from 1920 to 1949, operating from Taiwan only post-1949....
3rd Pursuit Group, 17th Squadron—based at Chuyung airfield—engaged eight out of 20 Mitsubishi G3M
Mitsubishi G3M
The Mitsubishi G3M was a Japanese bomber used during World War II.-Design and development:...
medium bomber
Medium bomber
A medium bomber is a bomber aircraft designed to operate with medium bombloads over medium distances; the name serves to distinguish them from the larger heavy bombers and smaller light bombers...
s from the Kisarazu Air Group sent to attack Nanking. The Chinese Boeing fighters helped shoot down two of the four Japanese bombers destroyed that day without suffering any losses. Subsequent engagements between the Chinese "Peashooter" pilots and pilots of the Imperial Japanese Navy
Imperial Japanese Navy
The Imperial Japanese Navy was the navy of the Empire of Japan from 1869 until 1947, when it was dissolved following Japan's constitutional renunciation of the use of force as a means of settling international disputes...
flying the Mitsubishi A5M
Mitsubishi A5M
The Mitsubishi A5M, Japanese Navy designation was "Type 96 carrier-based fighter" was a Japanese carrier-based fighter aircraft. It was the world's first monoplane shipboard fighter and the direct ancestor of the famous Mitsubishi A6M 'Zero'...
"Claudes" were Asia's first ever aerial dogfights and kills between monoplane fighter aircraft. A single P-26 was in service with the Spanish Republican Air Force
Spanish Republican Air Force
The Spanish Republican Air Force, , was the air arm of the Second Spanish Republic, the legally established government of Spain between 1931 and 1939...
during the Spanish Civil War
Spanish Civil War
The Spanish Civil WarAlso known as The Crusade among Nationalists, the Fourth Carlist War among Carlists, and The Rebellion or Uprising among Republicans. was a major conflict fought in Spain from 17 July 1936 to 1 April 1939...
of 1936-1939, but no aerial kills were recorded with this aircraft; it was shot down in 1936.

Following Pearl Harbor, only nine P-26s remained airworthy in the Panama Canal Zone. In 1942-1943, the Fuerza Aérea de Guatemala acquired seven P-26s ostensibly by the U.S. government smuggling them in as "Boeing PT-26A" trainers to get around restrictions of sales to Latin American countries. The last two P-26s in service were still flying with Guatemala's Air Force until 1956, when they were replaced with P-51 Mustangs. The P-26's last combat operation was with Guatemala's Air Force during a 1954 coup.

The P-26 was the last Boeing fighter to enter service until Boeing acquired McDonnell-Douglas with production and continuing support contracts for the Boeing F/A-18E/F Super Hornet in 2002. Between those aircraft, Boeing did produce the experimental XF8B
Boeing F8B
|-See also:-Bibliography:* Allen, Francis. "Last of the Line: Boeing's XF8B-1 Multi-purpose Fighter." Air Enthusiast No. 55, Autumn 1994.* Donald, David, ed. "Boeing Model 400 ".Encyclopedia of World Aircraft. Etobicoke, ON: Prospero Books, 1997. ISBN 1-85605-375-X.* Green, William. "Boeing...
in 1944 as well as the prototype YF-22
F-22 Raptor
The Lockheed Martin/Boeing F-22 Raptor is a single-seat, twin-engine fifth-generation supermaneuverable fighter aircraft that uses stealth technology. It was designed primarily as an air superiority fighter, but has additional capabilities that include ground attack, electronic warfare, and signals...
in 1991.