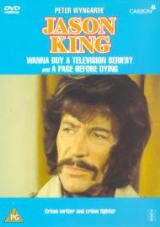 Encyclopedia
Jason King was a British
United Kingdom
The United Kingdom of Great Britain and Northern IrelandIn the United Kingdom and Dependencies, other languages have been officially recognised as legitimate autochthonous languages under the European Charter for Regional or Minority Languages...
television
Television
Television is a telecommunication medium for transmitting and receiving moving images that can be monochrome or colored, with accompanying sound...
series produced from 1971 to 1972. Each episode was one hour in duration (including commercial breaks), and the series had a run of one season of 26 episodes. As well as its native UK, the series was also screened in countries as far afield as Australia
Australia
Australia , officially the Commonwealth of Australia, is a country in the Southern Hemisphere comprising the mainland of the Australian continent, the island of Tasmania, and numerous smaller islands in the Indian and Pacific Oceans. It is the world's sixth-largest country by total area...
, Norway
Norway
Norway , officially the Kingdom of Norway, is a Nordic unitary constitutional monarchy whose territory comprises the western portion of the Scandinavian Peninsula, Jan Mayen, and the Arctic archipelago of Svalbard and Bouvet Island. Norway has a total area of and a population of about 4.9 million...
, Argentina
Argentina
Argentina , officially the Argentine Republic , is the second largest country in South America by land area, after Brazil. It is constituted as a federation of 23 provinces and an autonomous city, Buenos Aires...
and Peru
Peru
Peru , officially the Republic of Peru , is a country in western South America. It is bordered on the north by Ecuador and Colombia, on the east by Brazil, on the southeast by Bolivia, on the south by Chile, and on the west by the Pacific Ocean....
(where it was dubbed in Spanish). It was made in the UK by Lew Grade
Lew Grade
Lew Grade, Baron Grade , born Lev Winogradsky, was an influential Russian-born English impresario and media mogul.-Early years:...
's production company, ITC
ITC Entertainment
The Incorporated Television Company was a British television company largely involved in production and distribution. It was founded by Lew Grade.-History:...
.

The series featured the further adventures of the title character who had first appeared in Department S
Department S
Department S is a United Kingdom spy-fi adventure series produced by ITC Entertainment. The series consists of 28 episodes which originally aired in 1969–1970. It starred Peter Wyngarde as author Jason King , Joel Fabiani as Stewart Sullivan, and Rosemary Nicols as computer expert Annabelle Hurst...
(1969). In that series he was a dilettante
Amateur
An amateur is generally considered a person attached to a particular pursuit, study, or science, without pay and often without formal training....
dandy
Dandy
A dandy is a man who places particular importance upon physical appearance, refined language, and leisurely hobbies, pursued with the appearance of nonchalance in a cult of Self...
and author
Author
An author is broadly defined as "the person who originates or gives existence to anything" and that authorship determines responsibility for what is created. Narrowly defined, an author is the originator of any written work.-Legal significance:...
working as part of a team of investigators. In Jason King he had left that service and was concentrating on writing adventure novels following the adventures of the fictional Mark Caine, [which the Jason King character was also writing about in Department S] who closely resembled Jason King in looks, manner, style, and personality. None of the other regular characters from Department S appeared in this series.

In the course of visiting international locations as part of his research, or through being summoned by people needing assistance, King would be frequently embroiled in adventure stories featuring glamorous women, exotic locations (for the era), menacing villain
Villain
A villain is an "evil" character in a story, whether a historical narrative or, especially, a work of fiction. The villain usually is the antagonist, the character who tends to have a negative effect on other characters...
s, political turmoil, or espionage intrigue.

The first episode depicted King's retelling of a Mark Caine novel to a television executive which alternated between King's interpretation of events, followed by the television executive's version. King's version showed style and class while the executive's version featured added suspense, more cliches, and had the women in more revealing costumes. In the footage representing both men's vision of the novel adapted for the screen, Mark Caine was portrayed by Wyngarde.

Subsequent episodes featured Wyngarde playing King trying to write his novels and being hassled by his publisher Nicola Harvester about deadlines. King, however, was usually distracted by beautiful women and his real-life adventures and was sometimes tricked by Ryland of the British Government into assisting the Government in international political matters: all of which later found their way into the adventures of the fictional Mark Caine.

The series was created by Dennis Spooner
Dennis Spooner
Dennis Spooner was an English television screenwriter and story editor, known primarily for his programmes about fictional spies and his work in children's television in the 1960s...
and like its predecessor was made by Lew Grade
Lew Grade
Lew Grade, Baron Grade , born Lev Winogradsky, was an influential Russian-born English impresario and media mogul.-Early years:...
's ITC Entertainment
ITC Entertainment
The Incorporated Television Company was a British television company largely involved in production and distribution. It was founded by Lew Grade.-History:...
production company (which had become successful with such series as The Saint
The Saint (TV series)
The Saint was an ITC mystery spy thriller television series that aired in the UK on ITV between 1962 and 1969. It centred on the Leslie Charteris literary character, Simon Templar, a Robin Hood-like adventurer with a penchant for disguise. The character may be nicknamed The Saint because the...
and Danger Man
Danger Man
Danger Man is a British television series that was broadcast between 1960 and 1962, and again between 1964 and 1968. The series featured Patrick McGoohan as secret agent John Drake. Ralph Smart created the program and wrote many of the scripts...
), for ATV
Associated TeleVision
Associated Television, often referred to as ATV, was a British television company, holder of various licences to broadcast on the ITV network from 24 September 1955 until 00:34 on 1 January 1982...
— Grade's broadcasting subsidiary of ITC.

An analogue of Jason King appears in the comic book series The Invisibles
The Invisibles
The Invisibles is a comic book series that was published by the Vertigo imprint of DC Comics from 1994 to 2000. It was created and scripted by Scottish writer Grant Morrison, and drawn by various artists throughout its publication....
, written by Grant Morrison
Grant Morrison
Grant Morrison is a Scottish comic book writer, playwright and occultist. He is known for his nonlinear narratives and counter-cultural leanings, as well as his successful runs on titles like Animal Man, Doom Patrol, JLA, The Invisibles, New X-Men, Fantastic Four, All-Star Superman, and...
as "Mr. Six", the so-called "Last of the International Playboys", and member of "Division X"

In the X-Men
Uncanny X-Men
Uncanny X-Men, first published as The X-Men, is the flagship Marvel Comics comic book series for the X-Men franchise. It is the mainstream continuity featuring the adventures of the eponymous group of mutant superheroes...
comics, the character of Jason Wyngarde (aka Mastermind
Mastermind (Jason Wyngarde)
Mastermind is a Marvel Comics supervillain, an adversary of the X-Men. Created by writer Stan Lee and artist/co-writer Jack Kirby, he first appeared in X-Men #4 . He was given his "real name", Jason Wyngarde, by Chris Claremont and John Byrne.The original Mastermind was a mutant with the power to...
) was partially inspired by Jason King and Peter Wyngarde. Mastermind had first appeared in the 1960s, but took on the appearance and identity of Jason Wyngarde in the build-up to the X-Men's first confrontation with the Hellfire Club
Hellfire Club (comics)
The Hellfire Club is a fictional society within the Marvel Comics Universe that often comes into confrontation with the mutant superhero team, the X-Men...
in the late 1970s. Wyngarde had played the leader of another Hellfire club in A Touch of Brimstone, an episode of the popular TV series The Avengers
The Avengers (TV series)
The Avengers is a spy-fi British television series set in the 1960s Britain. The Avengers initially focused on Dr. David Keel and his assistant John Steed . Hendry left after the first series and Steed became the main character, partnered with a succession of assistants...
starring Patrick Macnee
Patrick Macnee
Patrick Macnee is an English actor, best known for his role as the secret agent John Steed in the series The Avengers.-Early life:...
and Diana Rigg
Diana Rigg
Dame Enid Diana Elizabeth Rigg, DBE is an English actress. She is probably best known for her portrayals of Emma Peel in The Avengers and Countess Teresa di Vicenzo in the 1969 James Bond film On Her Majesty's Secret Service....
who appeared in a leather costume that Jean Grey
Jean Grey
Jean Grey-Summers is a fictional comic book superheroine appearing in comic books published by Marvel Comics. She has been known under the aliases Marvel Girl, Phoenix, and Dark Phoenix and is best known as one of five original members of the X-Men, for her relationship with Cyclops, and for her...
would adopt as the Hellfire Club's Black Queen http://theavengers.tv/forever/peel1-21.htm.

The series has been released on DVD in Australia, the United States and Germany.

He is also one of the inspirations (especially his clothes) for Kim Newman's
Kim Newman
Kim Newman is an English journalist, film critic, and fiction writer. Recurring interests visible in his work include film history and horror fiction—both of which he attributes to seeing Tod Browning's Dracula at the age of eleven—and alternate fictional versions of history...
psychic crime fighter and secret agent Richard Jeperson
Richard Jeperson
Richard Jeperson is a fictional 1970s psychic investigator created by British horror / fantasy author Kim Newman. He appears in many of Newman's short stories as both a central and background character, and is the focal point of a collection of short stories entitled The Man from the Diogenes...
.

Wyngarde is said to have been the inspiration for the character of Fireball in the strip of the same name in D.C. Thompson's Bullet comic.

The character appeared in Episode 1 of Series 10 of Rab C Nesbitt in which he surfaces from inside an armoured vehicle outside the house of the character of the show where he's holding a government minister hostage. On being offered a shirt by Jason King of the type he (Jason) might wear by way of appeasement Rab decides it's time to call an end to the siege and says 'When Jason King says "Jump!", well, you say "How high?"'.

In the 1972 Malaysian comedy film Laksamana Do Re Mi, the characters remark on the villain Menteri Fasola's resemblance to Jason King. Most younger Malaysians have no idea who Jason King is and don't get the 1970s cultural reference.