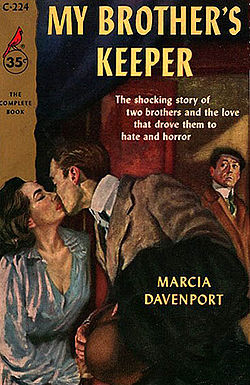 Marcia Davenport was an American
United States
The United States of America is a federal constitutional republic comprising fifty states and a federal district...
author
Author
An author is broadly defined as "the person who originates or gives existence to anything" and that authorship determines responsibility for what is created. Narrowly defined, an author is the originator of any written work.-Legal significance:...
and music critic. She was born Marcia Glick in New York City
New York City
New York is the most populous city in the United States and the center of the New York Metropolitan Area, one of the most populous metropolitan areas in the world. New York exerts a significant impact upon global commerce, finance, media, art, fashion, research, technology, education, and...
on June 9, 1903, the daughter of Bernard Glick and the opera
Opera
Opera is an art form in which singers and musicians perform a dramatic work combining text and musical score, usually in a theatrical setting. Opera incorporates many of the elements of spoken theatre, such as acting, scenery, and costumes and sometimes includes dance...
singer Alma Gluck
Alma Gluck
Alma Gluck was a Romanian-born American soprano, one of the world's most famous female singers at the peak of her career .-Life and career:...
, and she became the stepdaughter of violinist Efrem Zimbalist
Efrem Zimbalist
Efrem Zimbalist, Sr. was one of the world's most prominent concert violinists, as well as a composer, teacher, conductor and a long-time director of the Curtis Institute of Music.-Early life:...
when Alma Gluck remarried.

Davenport traveled extensively with her parents and was educated intermittently at the Friends School in Philadelphia, Pennsylvania
Pennsylvania
The Commonwealth of Pennsylvania is a U.S. state that is located in the Northeastern and Mid-Atlantic regions of the United States. The state borders Delaware and Maryland to the south, West Virginia to the southwest, Ohio to the west, New York and Ontario, Canada, to the north, and New Jersey to...
, and the Shipley School at Bryn Mawr
Bryn Mawr, Pennsylvania
Bryn Mawr from Welsh for "big hill") is a census-designated place in Lower Merion Township, Montgomery County, Pennsylvania, just west of Philadelphia along Lancaster Avenue and the border with Delaware County...
. She began at Wellesley College but eloped to Pittsburgh
Pittsburgh, Pennsylvania
Pittsburgh is the second-largest city in the US Commonwealth of Pennsylvania and the county seat of Allegheny County. Regionally, it anchors the largest urban area of Appalachia and the Ohio River Valley, and nationally, it is the 22nd-largest urban area in the United States...
in April 1923 and married Frank D. Clarke. Eventually she earned her B.A. at the University of Grenoble
University of Grenoble
University of Grenoble or Grenoble University was a university in Grenoble, France until 1970, when it was split into several different institutions:...
. Her first child was born in 1924, but in 1925 she divorced Clarke.

She took an advertising copywriting job to support herself and her daughter. In 1928 she began her writing career on the editorial staff of The New Yorker
The New Yorker
The New Yorker is an American magazine of reportage, commentary, criticism, essays, fiction, satire, cartoons and poetry published by Condé Nast...
, where she worked until 1931. On May 13, 1929, she married Russell Davenport
Russell Davenport
Russell Wheeler Davenport was an American publisher and writer.Davenport was born in Bethlehem, Pennsylvania, the son of Russell W. Davenport, Sr., a vice president of Bethlehem Steel, and Cornelia Whipple Farnum....
, who soon after became editor of Fortune
Fortune (magazine)
Fortune is a global business magazine published by Time Inc. Founded by Henry Luce in 1930, the publishing business, consisting of Time, Life, Fortune, and Sports Illustrated, grew to become Time Warner. In turn, AOL grew as it acquired Time Warner in 2000 when Time Warner was the world's largest...
. Davenport's second daughter was born in 1934. That same year she began as the music critic of Stage magazine. Davenport had close ties through her mother and stepfather to the classical music world and particularly to the heady opera world of Europe and America in the first half of the 20th century. She was first celebrated as a writer for her first book, Mozart, the first published American biography of composer Wolfgang Amadeus Mozart
Wolfgang Amadeus Mozart
Wolfgang Amadeus Mozart , baptismal name Johannes Chrysostomus Wolfgangus Theophilus Mozart , was a prolific and influential composer of the Classical era. He composed over 600 works, many acknowledged as pinnacles of symphonic, concertante, chamber, piano, operatic, and choral music...
. Her marriage to Russell Davenport ended in 1944.

She also wrote several popular novels, notably The Valley of Decision
The Valley of Decision (novel)
The Valley of Decision is an historical novel by the American writer Marcia Davenport . It was a national bestseller in the 1940s and adapted into a film, The Valley of Decision, in 1945....
, a saga which traces the Scott family, prototypical owners of an iron works in Pittsburgh, from 1873 to the events of World War II. Davenport lived in Pittsburgh shortly after her first marriage, later using that background, along with further research on the steel industry, for the 788-page bestseller
Bestseller
A bestseller is a book that is identified as extremely popular by its inclusion on lists of currently top selling titles that are based on publishing industry and book trade figures and published by newspapers, magazines, or bookstore chains. Some lists are broken down into classifications and...
.

Her memoir Too Strong for Fantasy (1967) describes the people, the music, the places and the political forces which shaped her life. Of particular interest is her telling of the events leading up to the death of the Czech
Czechoslovakia
Czechoslovakia or Czecho-Slovakia was a sovereign state in Central Europe which existed from October 1918, when it declared its independence from the Austro-Hungarian Empire, until 1992...
diplomat and foreign minister Jan Masaryk
Jan Masaryk
Jan Garrigue Masaryk was a Czech diplomat and politician and Foreign Minister of Czechoslovakia from 1940 to 1948.- Early life :...
in the Czernin Palace in Prague
Prague
Prague is the capital and largest city of the Czech Republic. Situated in the north-west of the country on the Vltava river, the city is home to about 1.3 million people, while its metropolitan area is estimated to have a population of over 2.3 million...
in 1948 and of her close relationship with Masaryk over many years.

In 1973, she was a commentator on the radio broadcasts of the Metropolitan Opera
Metropolitan Opera
The Metropolitan Opera is an opera company, located in New York City. Originally founded in 1880, the company gave its first performance on October 22, 1883. The company is operated by the non-profit Metropolitan Opera Association, with Peter Gelb as general manager...
. During the 1940s, she was heard on various radio panel discussion shows, and she was a panelist with Alexander Woollcott
Alexander Woollcott
Alexander Humphreys Woollcott was an American critic and commentator for The New Yorker magazine and a member of the Algonquin Round Table....
and Rex Stout
Rex Stout
Rex Todhunter Stout was an American writer noted for his detective fiction. Stout is best known as the creator of the larger-than-life fictional detective Nero Wolfe, described by reviewer Will Cuppy as "that Falstaff of detectives." Wolfe's assistant Archie Goodwin recorded the cases of the...
on The People's Platform program of January 23, 1943, when Woollcott had a heart attack during the broadcast and died before he arrived at Roosevelt Hospital.

Marcia Davenport died January 16, 1996, in Monterey, California
Monterey, California
The City of Monterey in Monterey County is located on Monterey Bay along the Pacific coast in Central California. Monterey lies at an elevation of 26 feet above sea level. As of the 2010 census, the city population was 27,810. Monterey is of historical importance because it was the capital of...
, at the age of 92. She was survived by her youngest daughter Cornelia Davenport Schwartz, six grandchildren, and seven great-grandchildren. Her eldest daughter Patricia Clarke Kaplow, who predeceased her, was the mother of four of Marcia Davenport's grandchildren.

There is a memorial plaque dedicated to Marcia Davenport in Golden Lane, Prague.