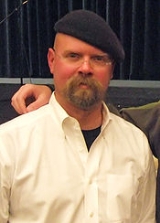 Encyclopedia
James Franklin "Jamie" Hyneman (born September 25, 1956) is an American special effects expert, best known for being the co-host of the television series MythBusters
MythBusters
MythBusters is a science entertainment TV program created and produced by Beyond Television Productions for the Discovery Channel. The series is screened by numerous international broadcasters, including Discovery Channel Australia, Discovery Channel Latin America, Discovery Channel Canada, Quest...
. He is also the owner of M5 Industries
M5 Industries
M5 Industries is a special effects company located in San Francisco, California that once produced special effects props for commercials and film, stop motion animation, and animatronic puppets, such as those seen in James and the Giant Peach and The Nightmare Before Christmas...
, the special effects workshop where MythBusters is filmed. He is known among Robot Wars
Robot Wars (TV series)
Robot Wars is a British game show modelled on a US-based competition of the same name. It was broadcast on BBC Two from 1998 until 2003, with its final series broadcast on Five in 2003 and 2004. Additional series were filmed for specific sectors of the global market, including two series of Robot...
devotees for his robot
Robot
A robot is a mechanical or virtual intelligent agent that can perform tasks automatically or with guidance, typically by remote control. In practice a robot is usually an electro-mechanical machine that is guided by computer and electronic programming. Robots can be autonomous, semi-autonomous or...
entry, Blendo
Blendo
Blendo is a combat robot designed and built by Jamie Hyneman. Adam Savage wired the electronics and control systems.Blendo had the first effective implementation of the full-body kinetic energy spinner weapon that became common in Robot Wars. The robot had a shell made from a wok and was spun by a...
, which, for a time, was deemed too dangerous for entry in the competition. He is one of the designers of the aerial robotic camera system Wavecam, used in sports and entertainment events. On May 16, 2010, he delivered the commencement address and received an honorary Doctorate of Engineering, from Villanova University
Villanova University
Villanova University is a private university located in Radnor Township, a suburb northwest of Philadelphia, Pennsylvania, in the United States...
.

Hyneman was born in Marshall, Michigan and raised in Columbus, Indiana. Describing his early life, Hyneman said "I was a problematic kid, to be sure. I left home when I was 14 and hitchhiked all over the country."

He earned a degree
Academic degree
An academic degree is a position and title within a college or university that is usually awarded in recognition of the recipient having either satisfactorily completed a prescribed course of study or having conducted a scholarly endeavour deemed worthy of his or her admission to the degree...
in Russian linguistics
Russian language
Russian is a Slavic language used primarily in Russia, Belarus, Uzbekistan, Kazakhstan, Tajikistan and Kyrgyzstan. It is an unofficial but widely spoken language in Ukraine, Moldova, Latvia, Turkmenistan and Estonia and, to a lesser extent, the other countries that were once constituent republics...
from Indiana University
Indiana University
Indiana University is a multi-campus public university system in the state of Indiana, United States. Indiana University has a combined student body of more than 100,000 students, including approximately 42,000 students enrolled at the Indiana University Bloomington campus and approximately 37,000...
. He also received a honorary Doctor of Engineering
Doctor of Engineering
The Doctor of Engineering is an academic degree awarded on the basis of advanced study and research in engineering or applied sciences...
degree from Villanova University
Villanova University
Villanova University is a private university located in Radnor Township, a suburb northwest of Philadelphia, Pennsylvania, in the United States...
. On 25 November 2011, Hyneman was awarded an honorary doctorate from the University of Twente (Enschede
Enschede
Enschede , also known as Eanske in the local dialect of Twents, is a municipality and a city in the eastern Netherlands in the province of Overijssel and in the Twente region...
, Netherlands
Netherlands
The Netherlands is a constituent country of the Kingdom of the Netherlands, located mainly in North-West Europe and with several islands in the Caribbean. Mainland Netherlands borders the North Sea to the north and west, Belgium to the south, and Germany to the east, and shares maritime borders...
) for his role in the popularization of science and technology.

A variety of careers fill his resume, including scuba diver, wilderness Survivalism|survival expert, Captain nautical|boat captain, linguist
Linguistics
Linguistics is the scientific study of human language. Linguistics can be broadly broken into three categories or subfields of study: language form, language meaning, and language in context....
, pet shop owner, animal wrangler
Wrangler (profession)
In North America, a wrangler is someone employed to handle animals professionally, especially horses, but also other types of animals. Wranglers also handle the horses and other animals during the making of motion pictures...
, machinist
Machinist
A machinist is a person who uses machine tools to make or modify parts, primarily metal parts, a process known as machining. This is accomplished by using machine tools to cut away excess material much as a woodcarver cuts away excess wood to produce his work. In addition to metal, the parts may...
, concrete
Concrete
Concrete is a composite construction material, composed of cement and other cementitious materials such as fly ash and slag cement, aggregate , water and chemical admixtures.The word concrete comes from the Latin word...
inspector, and chef
Chef
A chef is a person who cooks professionally for other people. Although over time the term has come to describe any person who cooks for a living, traditionally it refers to a highly skilled professional who is proficient in all aspects of food preparation.-Etymology:The word "chef" is borrowed ...
. He apparently has a mild case of acrophobia
Acrophobia
Acrophobia is an extreme or irrational fear of heights. It belongs to a category of specific phobias, called space and motion discomfort that share both similar etiology and options for treatment.Most people experience a degree of natural fear when exposed to heights, especially if there is little...
(fear of heights), as mentioned in the "Hammer Drop" episode segment of Mythbusters.

He has been married to Eileen Walsh, a science teacher at Encinal High School
Encinal High School
Encinal High School is a public coeducational high school serving grades 9-12. It is located in Alameda, California and is part of the Alameda Unified School District.-Threatened closure:...
, since 1989. They met while he owned a sailboat diving charter business in the Virgin Islands
Virgin Islands
The Virgin Islands are the western island group of the Leeward Islands, which are the northern part of the Lesser Antilles, which form the border between the Caribbean Sea and the Atlantic Ocean...
. Hyneman identifies strongly with skeptics and atheists.

A distinctive part of his appearance is his dark beret
Beret
A beret is a soft, round, flat-crowned hat, designated a "cap", usually of woven, hand-knitted wool, crocheted cotton, or wool felt, or acrylic fiber....
, white long-sleeve button up shirt over a black t-shirt, no-rim glasses, and, occasionally, sunglasses. This, along with his walrus-style moustache
Walrus moustache
The walrus moustache is characterized by whiskers that are thick and bushy in nature. Its name derives from the fact that the whiskers usually droop over the mouth, giving an appearance to the human face that is very similar to that of a walrus.-History:...
and deep voice, are constant subjects for jokes by co-host Adam Savage
Adam Savage
Adam Whitney Savage is an American industrial design and special effects designer/fabricator, actor, educator, and co-host of the Discovery Channel television series MythBusters. His model work has appeared in major films, including Star Wars: Episode II - Attack of the Clones and The Matrix...
and other team members. A sign hanging in his workshop reading "Clean Up or Die", visible in several episodes, expresses his desire to keep the shop clean and tidy.

Hyneman's demeanor on MythBusters is calm, logical and no-nonsense, in stark contrast
Double act
A double act, also known as a comedy duo, is a comic pairing in which humor is derived from the uneven relationship between two partners, usually of the same gender, age, ethnic origin and profession, but drastically different personalities or behavior...
to Savage's more animated, impulsive and energetic persona. Hyneman is often exasperated by Savage's antics and he sometimes squabbles with him on how to test myths. The two often have completely different ideas for performing experiments and building devices. Hyneman's ideas tend to be more simplified, and he has been heard saying "keep it as simple as possible" and "more grunt, less elegance". This has led to competitions between the two presenters when testing some myths, such as testing the Goldfish Memory myth and Hoverboard myth.

His notable achievements in commercials include the can-spitting vending machine
Vending machine
A vending machine is a machine which dispenses items such as snacks, beverages, alcohol, cigarettes, lottery tickets, consumer products and even gold and gems to customers automatically, after the customer inserts currency or credit into the machine....
seen in 7 Up
7 Up
7 Up is a brand of a lemon-lime flavored non-caffeinated soft drink. The rights to the brand are held by Dr Pepper Snapple Group in the United States, and PepsiCo in the rest of the world, including Puerto Rico, where the concentrate is manufactured at the Pepsi facility in Cidra...
commercials, and his patented two-wheeled football shoe from Nike
Nike, Inc.
Nike, Inc. is a major publicly traded sportswear and equipment supplier based in the United States. The company is headquartered near Beaverton, Oregon, which is part of the Portland metropolitan area...
Lab commercials.

He is soon to be known as dr.h.c.
Honorary degree
An honorary degree or a degree honoris causa is an academic degree for which a university has waived the usual requirements, such as matriculation, residence, study, and the passing of examinations...
Jamie Hyneman, since the University of Twente has decided to confer him (together with Adam Savage) such titles for their role in popularizing science, with the occasion of its 50th anniversary, on November 25, 2011.

The two army-junk sellers in The Darwin Awards
The Darwin Awards (film)
The Darwin Awards is a 2006 American adventure comedy film based on the website of the same name.Written and directed by Finn Taylor, the film premiered January 25, 2006, at the Sundance Film Festival...
are portrayed by Savage and Hyneman. They appear during the story of the rocket-car
JATO Rocket Car
The account of the JATO Rocket Car was one of the original Darwin Awards winners: a man who supposedly met his death in a spectacular manner after mounting a rocket engine on a common automobile. It was originally circulated as a forwarded email....
, which they effectively reproduced in the series' pilot episode.

Hyneman made a cameo appearance
Cameo appearance
A cameo role or cameo appearance is a brief appearance of a known person in a work of the performing arts, such as plays, films, video games and television...
along with Savage on CSI: Crime Scene Investigation on the May 1, 2008 episode "The Theory of Everything", where they play inspectors each giving thumbs-up after seeing a shirt soaked in pepper spray catch fire when shot by a taser. They would go on to test this myth and prove it confirmed with certain types of pepper spray.