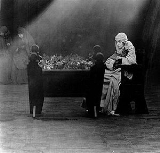 This complex film consists of four distinct, but parallel, stories—intercut with increasing frequency as the film builds to a climax—that demonstrate mankind's persistent intolerance throughout the ages. The film sets up moral and psychological connections among the different stories. The timeline covers approximately 2,500 years:


Breaks between the differing time-periods are marked by the symbolic image of a mother rocking a cradle, representing the passing of generations. One of the unusual characteristics of the film is that many of the characters don't have names. Griffith wished them to be emblem
Emblem
An emblem is a pictorial image, abstract or representational, that epitomizes a concept — e.g., a moral truth, or an allegory — or that represents a person, such as a king or saint.-Distinction: emblem and symbol:...
atic of human types. Thus, the central female character in the modern story is called The Dear One. Her young husband is called The Boy, and the leader of the local Mafia
Mafia
The Mafia is a criminal syndicate that emerged in the mid-nineteenth century in Sicily, Italy. It is a loose association of criminal groups that share a common organizational structure and code of conduct, and whose common enterprise is protection racketeering...
is called The Musketeer of the Slums. Critics and film theorists indicate these names show Griffith's sentimentalism, which was already hinted at in The Birth of a Nation, with names such as The Little Colonel. 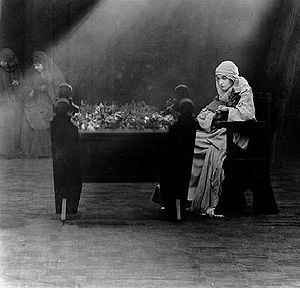 In order of appearance: 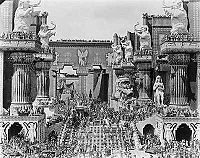 Actual costs to produce Intolerance are unknown, but best estimates are close to $2 million (about $million today), an astronomical sum in 1916. The film was by far the most expensive made at that point. When the film became a flop
Box office bomb
The phrase box office bomb refers to a film for which the production and marketing costs greatly exceeded the revenue regained by the movie studio. This should not be confused with Hollywood accounting when official figures show large losses, yet the movie is a financial success.A film's financial...
at the box-office, the burden was so great that in 1918 Triangle Film Corporation
Triangle Film Corporation
Triangle Film Corporation was a major American motion-picture studio, founded in the summer of 1915 in Culver City, California, and envisioned as a prestige studio based on the producing abilities of filmmakers D. W. Griffith, Thomas Ince and Mack Sennett...
was put up for sale.

A detailed account of the film’s production is told in William M. Drew's 1986 book D.W.Griffith's Intolerance: Its Genesis and Its Vision.

Upon its initial release, Intolerance was a commercial failure.
Intolerance has been called "the only film fugue
Fugue
In music, a fugue is a compositional technique in two or more voices, built on a subject that is introduced at the beginning in imitation and recurs frequently in the course of the composition....
". Professor Theodore Huff, one of the leading film critics of the first half of the 20th century, stated that it was the only motion picture worthy of taking its place alongside Beethoven's Fifth Symphony, the masterpieces of Michelangelo
Michelangelo
Michelangelo di Lodovico Buonarroti Simoni , commonly known as Michelangelo, was an Italian Renaissance painter, sculptor, architect, poet, and engineer who exerted an unparalleled influence on the development of Western art...
, etc. as a separate work of art.

In 2007, AFI's 100 Years...100 Movies (10th Anniversary Edition) ranked Intolerance at number 49 of 100 films. The film currently holds a 96% approval rating on the aggregate site Rotten Tomatoes
Rotten Tomatoes
Rotten Tomatoes is a website devoted to reviews, information, and news of films—widely known as a film review aggregator. Its name derives from the cliché of audiences throwing tomatoes and other vegetables at a poor stage performance...
.

Film critic David Thomson
David Thomson (film critic)
David Thomson is a film critic and historian based in the United States and the author of more than 20 books, including The New Biographical Dictionary of Film.-Career:...
has written of the film's "self-destructive frenzy":

The cross-cutting, self-interrupting format is wearisome.... The sheer pretension is a roadblock, and one longs for the "Modern Story" to hold the screen.... [That story] is still very exciting in terms of its cross-cutting in the attempt to save the boy from the gallows. This episode is what Griffith did best: brilliant, modern suspense, geared up to rapidity — whenever Griffith let himself slow down he was yielding to bathos.... Anyone concerned with film history has to see Intolerance, and pass on.

Intolerance and its unorthodox editing were enormously influential, particularly among European and Soviet filmmakers. Many of the numerous assistant directors Griffith employed in making the film — Erich von Stroheim
Erich von Stroheim
Erich von Stroheim was an Austrian-born film star of the silent era, subsequently noted as an auteur for his directorial work.-Background:...
, Tod Browning
Tod Browning
Tod Browning was an American motion picture actor, director and screenwriter.Browning's career spanned the silent and talkie eras...
, Woody Van Dyke — went on to become important and noted Hollywood directors in the subsequent years.

The pictured set was featured in the video game LA Noire as a historical monument.

There are other budget/public domain video and Digital Video Disc versions of this film released by different companies, each with varying degrees of picture quality depending on the source that was used. A majority of these released are of poor picture quality, but even the restored 35 millimeter versions exhibit considerable film damage.

The Internet Movie Database lists the standard running time as 163 minutes, which is the running length of the DVD released by "Public Domain Flicks". The Delta DVD released in Region 1 as Intolerance: A Sun Play of the Ages and in Region 2 as Intolerance: Love's Struggle Throughout the Ages clocks in at 167 minutes. The version available for free viewing on the Internet Movie Archive is listed as 176 minutes, and is presumably the Killiam restoration.

Cameraman Karl Brown remembered a scene with the various members of the Babylonian harem that featured full frontal nudity. He was barred from the set that day, apparently because he was so young. While there are several shots of slaves and harem girls throughout the film (which were shot by another director, without Griffith's involvement) the scene that Brown describes is not in any surviving versions.