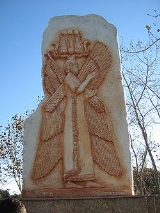 Overview
Cyrus II of PersiaCyrus II of Persia ( Kuruš (c. 600 BC or 576 BC–530 BC), commonly known as Cyrus the Great, also known as Cyrus the Elder, was the founder of the Achaemenid Empire
Achaemenid Empire
The Achaemenid Empire , sometimes known as First Persian Empire and/or Persian Empire, was founded in the 6th century BCE by Cyrus the Great who overthrew the Median confederation...
. Under his rule, the empire embraced all the previous civilized states of the ancient Near East
Ancient Near East
The ancient Near East was the home of early civilizations within a region roughly corresponding to the modern Middle East: Mesopotamia , ancient Egypt, ancient Iran The ancient Near East was the home of early civilizations within a region roughly corresponding to the modern Middle East: Mesopotamia...
, expanded vastly and eventually conquered most of Southwest Asia
Southwest Asia
Western Asia, West Asia, Southwest Asia or Southwestern Asia are terms that describe the westernmost portion of Asia. The terms are partly coterminous with the Middle East, which describes a geographical position in relation to Western Europe rather than its location within Asia...
and much of Central Asia
Central Asia
Central Asia is a core region of the Asian continent from the Caspian Sea in the west, China in the east, Afghanistan in the south, and Russia in the north...
, parts of Europe
Europe
Europe is, by convention, one of the world's seven continents. Comprising the westernmost peninsula of Eurasia, Europe is generally 'divided' from Asia to its east by the watershed divides of the Ural and Caucasus Mountains, the Ural River, the Caspian and Black Seas, and the waterways connecting...
and Caucasus
Caucasus
The Caucasus, also Caucas or Caucasia , is a geopolitical region at the border of Europe and Asia, and situated between the Black and the Caspian sea...
. From the Mediterranean sea
Mediterranean Sea
The Mediterranean Sea is a sea connected to the Atlantic Ocean surrounded by the Mediterranean region and almost completely enclosed by land: on the north by Anatolia and Europe, on the south by North Africa, and on the east by the Levant...
and Hellespont in the west to the Indus River
Indus River
The Indus River is a major river which flows through Pakistan. It also has courses through China and India.Originating in the Tibetan plateau of western China in the vicinity of Lake Mansarovar in Tibet Autonomous Region, the river runs a course through the Ladakh district of Jammu and Kashmir and...
in the east, Cyrus the Great created the largest empire the world had yet seen.

The reign of Cyrus the Great lasted between 29 and 31 years.

Conquest of the Median Empire

Cyrus the great began the empire by conquering which people

Conquest of the Neo-Babylonian Empire