Encyclopedia
Interferon-gamma is a dimer
Protein dimer
In biochemistry, a dimer is a macromolecular complex formed by two, usually non-covalently bound, macromolecules like proteins or nucleic acids...
ized soluble cytokine
Cytokine
Cytokines are small cell-signaling protein molecules that are secreted by the glial cells of the nervous system and by numerous cells of the immune system and are a category of signaling molecules used extensively in intercellular communication...
that is the only member of the type II class of interferon
Interferon
Interferons are proteins made and released by host cells in response to the presence of pathogens—such as viruses, bacteria, or parasites—or tumor cells. They allow communication between cells to trigger the protective defenses of the immune system that eradicate pathogens or tumors.IFNs belong to...
s. This interferon was originally called macrophage-activating factor, a term now used to describe a larger family of proteins to which IFN-γ belongs. In humans, the IFN-γ protein is encoded by the IFNG gene
Gene
A gene is a molecular unit of heredity of a living organism. It is a name given to some stretches of DNA and RNA that code for a type of protein or for an RNA chain that has a function in the organism. Living beings depend on genes, as they specify all proteins and functional RNA chains...
.

IFN-γ, or type II interferon, is a cytokine that is critical for innate and adaptive immunity against viral and intracellular bacterial infections and for tumor control. Aberrant IFN-γ expression is associated with a number of autoinflammatory and autoimmune diseases. The importance of IFN-γ in the immune system stems in part from its ability to inhibit viral replication directly, and most importantly from its immunostimulatory and immunomodulatory effects. IFN-γ is produced predominantly by natural killer (NK
Natural killer cell
Natural killer cells are a type of cytotoxic lymphocyte that constitute a major component of the innate immune system. NK cells play a major role in the rejection of tumors and cells infected by viruses...
) and natural killer T (NKT
Natural Killer T cell
Natural killer T cells are a heterogeneous group of T cells that share properties of both T cells and natural killer cells. Many of these cells recognize the non-polymorphic CD1d molecule, an antigen-presenting molecule that binds self- and foreign lipids and glycolipids...
) cells as part of the innate immune response, and by CD4
CD4
CD4 is a glycoprotein expressed on the surface of T helper cells, monocytes, macrophages, and dendritic cells. It was discovered in the late 1970s and was originally known as leu-3 and T4 before being named CD4 in 1984...
and CD8
CD8
CD8 is a transmembrane glycoprotein that serves as a co-receptor for the T cell receptor . Like the TCR, CD8 binds to a major histocompatibility complex molecule, but is specific for the class I MHC protein. There are two isoforms of the protein, alpha and beta, each encoded by a different gene...
cytotoxic T lymphocyte (CTL
Cytotoxic T cell
A cytotoxic T cell belongs to a sub-group of T lymphocytes that are capable of inducing the death of infected somatic or tumor cells; they kill cells that are infected with viruses , or are otherwise damaged or...
) effector T cells once antigen
Antigen
An antigen is a foreign molecule that, when introduced into the body, triggers the production of an antibody by the immune system. The immune system will then kill or neutralize the antigen that is recognized as a foreign and potentially harmful invader. These invaders can be molecules such as...
-specific immunity develops.

The IFN-γ monomer
Monomer
A monomer is an atom or a small molecule that may bind chemically to other monomers to form a polymer; the term "monomeric protein" may also be used to describe one of the proteins making up a multiprotein complex...
consists of a core of six α-helices and an extended unfolded sequence in the C-terminal region. This is shown in the structural models below. The α-helices in the core of the structure are numbered 1 to 6.

The biologically active dimer is formed by anti-parallel inter-locking of the two monomers as shown below. In the cartoon model, one monomer is shown in red, the other in blue. 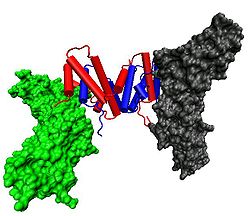 The biological significance of heparan sulfates interaction with IFN-γ is unclear, however binding of the D1 cluster to HS may protect it from proteolytic cleavage.

IFN-γ has antiviral, immunoregulatory, and anti-tumor properties. It alters transcription in up to 30 genes producing a variety of physiological and cellular responses. Among the effects are:


IFN-γ is the primary cytokine
Cytokine
Cytokines are small cell-signaling protein molecules that are secreted by the glial cells of the nervous system and by numerous cells of the immune system and are a category of signaling molecules used extensively in intercellular communication...
which defines Th1 cells: Th1 cells secrete IFN-γ, which in turn causes more undifferentiated CD4+ cells (Th0 cells) to differentiate into Th1 cells, representing a positive feedback loop—while suppressing Th2 cell differentiation. (Equivalent defining cytokines for other cells include IL-4 for Th2 cells and IL-17
IL-17
IL-17 or IL 17 can refer to:* Interleukin 17* Illinois' 17th congressional district* Illinois Route 17...
for Th17 cells
T helper 17 cell
T helper 17 cells are a subset of T helper cells producing interleukin 17 discovered in 2007. They are considered developmentally distinct from Th1 and Th2 cells and excessive amounts of the cell are thought to play a key role in autoimmune disease such as multiple sclerosis , but also...
.)

A granuloma is the bodies way of dealing with a substance it cannot remove or sterilize. Infectious causes of granulomas (infections are typically the most common cause of granulomas) include tuberculosis, leprosy, histoplasmosis, cryptococcosis, coccidioidomycosis, blastomycosis and cat scratch disease. Examples of non-infectious granulomatous diseases are sarcoidosis, Crohn's disease, berylliosis, giant-cell arteritis, Wegener's granulomatosis, Churg-Strauss syndrome, pulmonary rheumatoid nodules and aspiration of food and other particulate material into the lung. The infectious pathophysiology of granulomas is discussed primarily here.