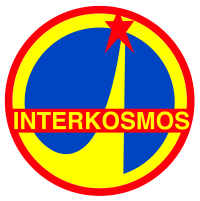 Interkosmos was a space program of the Soviet Union
Soviet Union
The Soviet Union , officially the Union of Soviet Socialist Republics , was a constitutionally socialist state that existed in Eurasia between 1922 and 1991....
designed to include members of military forces of allied Warsaw Pact
Warsaw Pact
The Warsaw Treaty Organization of Friendship, Cooperation, and Mutual Assistance , or more commonly referred to as the Warsaw Pact, was a mutual defense treaty subscribed to by eight communist states in Eastern Europe...
countries in manned and unmanned missions. The participation of countries which were not Soviet allies, such as India
India
India , officially the Republic of India , is a country in South Asia. It is the seventh-largest country by geographical area, the second-most populous country with over 1.2 billion people, and the most populous democracy in the world...
, Syria
Syria
Syria , officially the Syrian Arab Republic , is a country in Western Asia, bordering Lebanon and the Mediterranean Sea to the West, Turkey to the north, Iraq to the east, Jordan to the south, and Israel to the southwest....
and France
France
The French Republic , The French Republic , The French Republic , (commonly known as France , is a unitary semi-presidential republic in Western Europe with several overseas territories and islands located on other continents and in the Indian, Pacific, and Atlantic oceans. Metropolitan France...
was a reflection of non-aligned
Non-Aligned Movement
The Non-Aligned Movement is a group of states considering themselves not aligned formally with or against any major power bloc. As of 2011, the movement had 120 members and 17 observer countries...
politics during the Cold War
Cold War
The Cold War was the continuing state from roughly 1946 to 1991 of political conflict, military tension, proxy wars, and economic competition between the Communist World—primarily the Soviet Union and its satellite states and allies—and the powers of the Western world, primarily the United States...
.

Begun in April 1967 with unmanned research satellite
Satellite
In the context of spaceflight, a satellite is an object which has been placed into orbit by human endeavour. Such objects are sometimes called artificial satellites to distinguish them from natural satellites such as the Moon....
missions, the first manned mission occurred in February 1978. Interkosmos missions enabled 14 non-Soviet cosmonauts to participate in Soyuz space flights between 1978 and 1988. The program was responsible for sending into space the first citizen of a country other than the USA or USSR; Vladimír Remek
Vladimír Remek
Vladimír Remek is the first Czechoslovak in space and the first cosmonaut from a country other than the Soviet Union or the United States. As of 2004, with the entry of the Czech Republic into the European Union Vladimír Remek is considered to be the first astronaut from the EU...
of Czechoslovakia
Czechoslovakia
Czechoslovakia or Czecho-Slovakia was a sovereign state in Central Europe which existed from October 1918, when it declared its independence from the Austro-Hungarian Empire, until 1992...
. Interkosmos also resulted in the first black and Hispanic person in space, Arnaldo Tamayo Méndez
Arnaldo Tamayo Méndez
Arnaldo Tamayo Méndez was the first Cuban citizen and the first person from a country in the Western Hemisphere other than the United States to travel into earth orbit...
of Cuba
Cuba
The Republic of Cuba is an island nation in the Caribbean. The nation of Cuba consists of the main island of Cuba, the Isla de la Juventud, and several archipelagos. Havana is the largest city in Cuba and the country's capital. Santiago de Cuba is the second largest city...
, and the first Asian person in space, Phạm Tuân of Vietnam
Vietnam
Vietnam – sometimes spelled Viet Nam , officially the Socialist Republic of Vietnam – is the easternmost country on the Indochina Peninsula in Southeast Asia. It is bordered by China to the north, Laos to the northwest, Cambodia to the southwest, and the South China Sea –...
. Of the countries involved, only Bulgaria
Bulgarian astronaut program
The Bulgarian astronaut program began in 1977 when members of the Bulgarian People's Air Force where trained for space tasks. Bulgaria is the only country from the Intercosmos program to send two cosmonauts into space in a time when space missions were reserved to the world...
sent two cosmonauts in space. 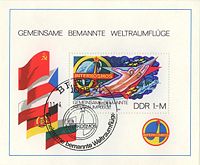