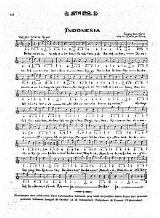 Encyclopedia
"Indonesia Raya" is the national anthem
National anthem
A national anthem is a generally patriotic musical composition that evokes and eulogizes the history, traditions and struggles of its people, recognized either by a nation's government as the official national song, or by convention through use by the people.- History :Anthems rose to prominence...
of the Republic of Indonesia
Indonesia
Indonesia , officially the Republic of Indonesia , is a country in Southeast Asia and Oceania. Indonesia is an archipelago comprising approximately 13,000 islands. It has 33 provinces with over 238 million people, and is the world's fourth most populous country. Indonesia is a republic, with an...
. The song was introduced by its composer
Composer
A composer is a person who creates music, either by musical notation or oral tradition, for interpretation and performance, or through direct manipulation of sonic material through electronic media...
, Wage Rudolf Supratman
Wage Rudolf Supratman
Wage Rudolf Supratman was born on March 9, 1903 in Jakarta and died on August 17, 1938 due to sickness in Surabaya, East Java. He was an Indonesian songwriter...
, on 28 October 1928 during the Second Indonesian Youth Congress in Batavia
Jakarta
Jakarta is the capital and largest city of Indonesia. Officially known as the Special Capital Territory of Jakarta, it is located on the northwest coast of Java, has an area of , and a population of 9,580,000. Jakarta is the country's economic, cultural and political centre...
. The song marked the birth of the all-archipelago nationalist movement in Indonesia that supported the idea of one single "Indonesia" as successor to the Dutch East Indies
Dutch East Indies
The Dutch East Indies was a Dutch colony that became modern Indonesia following World War II. It was formed from the nationalised colonies of the Dutch East India Company, which came under the administration of the Netherlands government in 1800....
, rather than split into several colonies.

The first stanza of "Indonesia Raya" was chosen as the national anthem when Indonesia proclaimed its independence at 17 August 1945.

"Indonesia Raya" is played in flag raising ceremonies. The flag
Flag of Indonesia
The national flag of Indonesia, which is known as Sang Saka Merah-Putih or Bendera Merah-Putih or simply Merah-Putih in Indonesian, is based on the banner of the 13th century Majapahit Empire in East Java...
is raised in a solemn and timed motion so that it reaches the top of the flagpole as the anthem ends. The main flag raising ceremony is held annually on 17 August to commemorate Independence day. The ceremony is led by the President of Indonesia
President of Indonesia
The President of the Republic of Indonesia is the head of state and the head of government of the Republic of Indonesia.The first president was Sukarno and the current president is Susilo Bambang Yudhoyono.- Sukarno era :...
.

In 1928, youths from across Indonesia held the first Indonesian Youth Congress, an official meeting to push for the independence of the nation. Upon hearing about the efforts, young reporter Wage Rudolf Supratman
Wage Rudolf Supratman
Wage Rudolf Supratman was born on March 9, 1903 in Jakarta and died on August 17, 1938 due to sickness in Surabaya, East Java. He was an Indonesian songwriter...
contacted the organizers of Congress with the intention of reporting the story, but they requested that he not publish the story from fear of Dutch colonial authorities
Dutch East Indies
The Dutch East Indies was a Dutch colony that became modern Indonesia following World War II. It was formed from the nationalised colonies of the Dutch East India Company, which came under the administration of the Netherlands government in 1800....
. The organizers wanted to avoid suspicion so that the Dutch would not ban the event. Supratman promised them this, and the organizers allowed him free access to the event. Supratman, who was also a musician and also a teacher, was inspired by the meetings and intended to write a song for the conference. After receiving encouragement from the conference leader Sugondo Djojopuspito
Sugondo Djojopuspito
Sugondo Djojopuspito was the Indonesian Youth Congress leader in 1928 who declared The Youth Pledge , i.e...
, Supratman played on the violin the song Indonesia with the hope that it would someday become a national anthem
National anthem
A national anthem is a generally patriotic musical composition that evokes and eulogizes the history, traditions and struggles of its people, recognized either by a nation's government as the official national song, or by convention through use by the people.- History :Anthems rose to prominence...
. He kept the script to himself because he felt that it was not the appropriate time to announce it.

Supratman first performed Indonesia on the violin on 28 October 1928 during the Second Indonesian Youth Congress.

Following the Second Youth Congress, the text of Indonesia was distributed by many political and student organizations. The press also played a key role in the publication of the song. On 7 November 1928, the Soeloeh Ra'jat Indonesia daily published the text to the song. This was followed by the Sin Po Chinese weekly on 10 November. In 1929, Wage Rudolf Supratman changed the title of his song to "Indonesia Raya" and appended the phrase National Anthem of Indonesia below it, but the text of the song did not change. Supratman personally printed and distributed copies of the song with its new title through pamphlets. All one thousand copies of the manuscript were sold within a short amount of time to his friends and family.

A businessman friend of his, Yo Kim Tjan, also expressed interest in recording "Indonesia Raya". With Supratman's consent, Yo created a copy of the song on a gramophone record
Gramophone record
A gramophone record, commonly known as a phonograph record , vinyl record , or colloquially, a record, is an analog sound storage medium consisting of a flat disc with an inscribed, modulated spiral groove...
overseas in order to obtain the best sound quality with the intention of bringing the copy back to Indonesia. However, before Yo was able to do so, Dutch colonial authorities had imposed a ban on the song. Yo was unable to bring the original back but was able to bring home a copy. According to Yo, Supratman had also given him the rights to sell record copies of "Indonesia Raya" through his store Toko Populair.

Jozef Cleber
Jozef Cleber
Jozef Cleber , also known as Jos Cleber or Jozef van Cleber, was a Dutch composer and conductor. He worked in the Netherlands, South-Africa and the Dutch East Indies/Indonesia...
a Dutch musician that arrived with a patron of 46 persons of Philharmonic Orchestra under direction of Yvon Baarspul was sent by the Netherlands Government to help the Indonesian Government for music development in Jakarta. "Jos" Cleber (34 years old), in his hometown was an experienced arranger for popular songs, and also successfully for Indonesian pop song arrangements, like Di Bawah Sinar Bulan Purnama and Rangkaian Melati, was asked to make a new arrangement the "Indonesia Raya" anthem by President Soekarno in 1950. Until then, there was no orchestral rendition of the anthem. President Soekarno made an appeal to Cleber to compose a symphonic rendition of "Indonesia Raya". The final rendition is in common use today.

The arrangements starts with a Tutti of strings and trumpets (in Verse A) that represents a brave and an elegant sound, and in the middle of the song (in Verse B) is played smoothly by strings, and finally (in Verse C) comes another Tutti of strings and trumpets with beautiful contrapuntal background of cornos, and together with timpanis and cymbals make it a brave sound for a national anthem that respected by the people.

The original recording was recorded by the Cosmopolitan Orchestra under the direction of Jos Cleber, and it was recorded on Phillips tape in 1951 by the Radio of Jakarta. Then it was digital re-recorded in 1997 in Australia based on Jos Cleber partiturs that stored in Jakarta, and it was played again by the Victorian Philharmonic under direction of Addie MS.

In 1951, ownership of the copyright to "Indonesia Raya" came into question. President Sukarno
Sukarno
Sukarno, born Kusno Sosrodihardjo was the first President of Indonesia.Sukarno was the leader of his country's struggle for independence from the Netherlands and was Indonesia's first President from 1945 to 1967...
ordered a search for the rightful heir to Supratman. By law, Supratman was the copyright holder of "Indonesia Raya" as its composer. After Supratman's death in 1938, ownership of the rights to his works fell upon the designated heirs, his four surviving sisters. However, because "Indonesia Raya" was officially adopted as the national anthem of Indonesia on 17 August 1945, the work became the property of the state. In addition, the name of "Wage Rudolf Supratman" must be listed as its creator.

As a national anthem, copies of "Indonesia Raya" cannot be circulated as merchandise to be sold. Consequently, the government had the obligation to obtain all the rights to distribute the song, including the original recording, from Yo Kim Tjan. In 1958, the government obtained the sole right to "Indonesia Raya" from Supratman's family. The following year, Yo handed the original record of the song to the Indonesian government. With the recommendation of the Department of Education, the government also rewarded Supratman's sisters with 250,000 Indonesian rupiah
Indonesian rupiah
The rupiah is the official currency of Indonesia. Issued and controlled by the Bank of Indonesia, the ISO 4217 currency code for the Indonesian rupiah is IDR. Informally, Indonesians also use the word "perak" in referring to rupiah...
each on 31 May 1960.