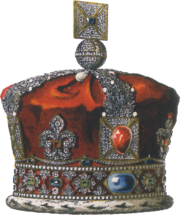 The Crown is of a design similar to St Edward's Crown: it includes a base of four crosses pattée
Cross pattée
A cross pattée is a type of cross which has arms narrow at the centre, and broader at the perimeter. An early English example from the start of the age of heraldry proper A cross pattée (or "cross patty", known also as "cross formée/formy") is a type of cross which has arms narrow at the...
alternating with four fleurs-de-lis
Fleur-de-lis
The fleur-de-lis or fleur-de-lys is a stylized lily or iris that is used as a decorative design or symbol. It may be "at one and the same time, political, dynastic, artistic, emblematic, and symbolic", especially in heraldry...
, above which are four half-arches surmounted by a cross. Inside is a velvet
Velvet
Velvet is a type of woven tufted fabric in which the cut threads are evenly distributed,with a short dense pile, giving it a distinctive feel.The word 'velvety' is used as an adjective to mean -"smooth like velvet".-Composition:...
cap with an ermine
Ermine
Ermine has several uses:* A common name for the stoat * The white fur and black tail end of this animal, which is historically worn by and associated with royalty and high officials...
border. The Imperial State Crown includes many precious gems, including: 2,868 diamond
Diamond
In mineralogy, diamond is an allotrope of carbon, where the carbon atoms are arranged in a variation of the face-centered cubic crystal structure called a diamond lattice. Diamond is less stable than graphite, but the conversion rate from diamond to graphite is negligible at ambient conditions...
s, 273 pearl
Pearl
A pearl is a hard object produced within the soft tissue of a living shelled mollusk. Just like the shell of a mollusk, a pearl is made up of calcium carbonate in minute crystalline form, which has been deposited in concentric layers. The ideal pearl is perfectly round and smooth, but many other...
s, 17 sapphire
Sapphire
Sapphire is a gemstone variety of the mineral corundum, an aluminium oxide , when it is a color other than red or dark pink; in which case the gem would instead be called a ruby, considered to be a different gemstone. Trace amounts of other elements such as iron, titanium, or chromium can give...
s, 11 emerald
Emerald
Emerald is a variety of the mineral beryl colored green by trace amounts of chromium and sometimes vanadium. Beryl has a hardness of 7.5–8 on the 10 point Mohs scale of mineral hardness...
s, and 5 rubies
Ruby
A ruby is a pink to blood-red colored gemstone, a variety of the mineral corundum . The red color is caused mainly by the presence of the element chromium. Its name comes from ruber, Latin for red. Other varieties of gem-quality corundum are called sapphires...
.

The crown includes several famous jewels: the cross at the top is set with a stone known as St. Edward's Sapphire
St. Edward's Sapphire
The St Edward's Sapphire gets its name from Edward the Confessor who wore the stone in his ring. According to legend the sapphire made its first appearance in the year 1042, where it was set into Edward's coronation ring. The gem survived through Oliver Cromwell's reign and disassembly of the crown...
, a sapphire taken from the ring (or possibly coronet
Coronet
A coronet is a small crown consisting of ornaments fixed on a metal ring. Unlike a crown, a coronet never has arches.The word stems from the Old French coronete, a diminutive of coronne , itself from the Latin corona .Traditionally, such headgear is – as indicated by the German equivalent...
) of Edward the Confessor
Edward the Confessor
Edward the Confessor also known as St. Edward the Confessor , son of Æthelred the Unready and Emma of Normandy, was one of the last Anglo-Saxon kings of England and is usually regarded as the last king of the House of Wessex, ruling from 1042 to 1066....
; the Black Prince's Ruby
Black Prince's Ruby
The Black Prince's Ruby is a bead-shaped spinel weighing roughly , approximately the size of a chicken egg. It is currently set in the cross pattée above the Cullinan II in the front of the Imperial State Crown...
(actually a spinel
Spinel
Spinel is the magnesium aluminium member of the larger spinel group of minerals. It has the formula MgAl2O4. Balas ruby is an old name for a rose-tinted variety.-Spinel group:...
) is set on the front cross pattée; the famous Cullinan II
Cullinan Diamond
The Cullinan diamond is the largest rough gem-quality diamond ever found, at .The largest polished gem from the stone is named Cullinan I or the Great Star of Africa, and at was the largest polished diamond in the world until the 1985 discovery of the Golden Jubilee Diamond, , also from the...
, or Lesser Star of Africa, is set on the front; and the back band contains the 104 carats (20.8 g) Stuart Sapphire. The crown also contains Queen Elizabeth’s Pearls.

The Imperial State Crown is generally worn at the end of a coronation
Coronation of the British monarch
The coronation of the British monarch is a ceremony in which the monarch of the United Kingdom is formally crowned and invested with regalia...
when the new monarch departs from Westminster Abbey
Westminster Abbey
The Collegiate Church of St Peter at Westminster, popularly known as Westminster Abbey, is a large, mainly Gothic church, in the City of Westminster, London, United Kingdom, located just to the west of the Palace of Westminster. It is the traditional place of coronation and burial site for English,...
and is not normally the crown used to crown the monarch. However, its predecessor (of the same name) was used to crown Queen Victoria and King Edward VII during their coronation ceremonies as both complained about the weight of the normally used, St Edward's Crown.

The current Imperial State Crown was manufactured for the coronation of King George VI
George VI of the United Kingdom
George VI was King of the United Kingdom and the Dominions of the British Commonwealth from 11 December 1936 until his death...
in 1937 by the Crown Jewellers Garrard & Co
Garrard & Co
Garrard & Co is a luxury jewellery and silver company founded by George Wickesin London in 1735. Its current base is at Albemarle Street in Mayfair, London, its USA flagship store is in New York. The company also has a presence in Tokyo, New York, Dubai, Moscow and Hong Kong...
. It is an exact replica of the earlier Imperial State Crown manufactured for Queen Victoria, but is of a more lightweight design and more comfortable to wear. The same Crown was remodelled for Queen Elizabeth II's coronation to give it slightly more feminine appearance and its total height lowered by about 1 inches (2.5 cm).

Because of its weight, monarchs often choose to wear the Imperial State Crown in their private apartments on and off for a couple of hours on the morning of the State Opening of Parliament so they can get used to the weight and feel comfortable with it on. One courtier reported on the morning of a State Opening witnessing Queen Elizabeth eating her breakfast and reading newspapers while wearing it. For a full fortnight
Fortnight
The fortnight is a unit of time equal to fourteen days, or two weeks. The word derives from the Old English fēowertyne niht, meaning "fourteen nights"....
before the annual Trooping the Colour
Trooping the Colour
Trooping the Colour is a ceremony performed by regiments of the British and the Commonwealth armies. It has been a tradition of British infantry regiments since the 17th century, although the roots go back much earlier. On battlefields, a regiment's colours, or flags, were used as rallying points...
ceremony, her father, King George VI, used to wear his heavy Guards bearskin
Bearskin
A bearskin is a tall fur cap, usually worn as part of a ceremonial military uniform. Traditionally, the bearskin was the headgear of grenadiers, and is still worn by grenadier and guards regiments in various armies.-Origins:...
headgear for an hour each morning so that he would not feel topheavy on the day of the event.

The Imperial State Crown, except when in use at State Openings, together with the other Crown Jewels, may be found on display at Jewel House in the Tower of London
Tower of London
Her Majesty's Royal Palace and Fortress, more commonly known as the Tower of London, is a historic castle on the north bank of the River Thames in central London, England. It lies within the London Borough of Tower Hamlets, separated from the eastern edge of the City of London by the open space...
. The frames of the old Imperial State Crowns of Kings George I
George I of Great Britain
George I was King of Great Britain and Ireland from 1 August 1714 until his death, and ruler of the Duchy and Electorate of Brunswick-Lüneburg in the Holy Roman Empire from 1698....
, George IV
George IV of the United Kingdom
George IV was the King of the United Kingdom of Great Britain and Ireland and also of Hanover from the death of his father, George III, on 29 January 1820 until his own death ten years later...
and Queen Victoria, among others, are also kept in the Tower.

As the most frequently worn royal crown, the Imperial State Crown has constantly been replaced, due to age, weight, the personal taste of the monarch, or the unavoidable damage that comes with use. Due to its constant usage, it is also the crown that requires most outside repairs and recasting.