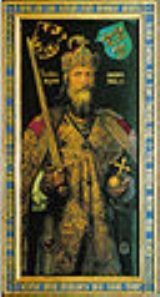 The Imperial Regalia, insignia, or crown jewels (in German Reichskleinodien, Reichsinsignien, or Reichsschatz) are the regalia
Regalia
Regalia is Latin plurale tantum for the privileges and the insignia characteristic of a Sovereign.The word stems from the Latin substantivation of the adjective regalis, 'regal', itself from Rex, 'king'...
of the Emperor
Emperor
An emperor is a monarch, usually the sovereign ruler of an empire or another type of imperial realm. Empress, the female equivalent, may indicate an emperor's wife or a woman who rules in her own right...
s and King
Monarch
A monarch is the person who heads a monarchy. This is a form of government in which a state or polity is ruled or controlled by an individual who typically inherits the throne by birth and occasionally rules for life or until abdication...
s of the Holy Roman Empire
Holy Roman Empire
The Holy Roman Empire was a realm that existed from 962 to 1806 in Central Europe.It was ruled by the Holy Roman Emperor. Its character changed during the Middle Ages and the Early Modern period, when the power of the emperor gradually weakened in favour of the princes...
. The most important parts are the Imperial Crown
Imperial Crown of the Holy Roman Empire
The Imperial Crown , is the hoop crown of the King of the Romans, the rulers of the German Kingdom, since the High Middle Ages. Most of the kings were crowned with it. It was made probably somewhere in Western Germany, either under Otto I , by Conrad II or Conrad III during the late 10th and early...
, the Holy Lance and the Imperial Sword
Imperial Sword
The Imperial Sword , is one of four Imperial Regalia of the Holy Roman Empire. During the coronation, it was given to the emperor along with the sceptre and the Imperial Orb...
. Today they are kept at the Schatzkammer
Schatzkammer
Schatzkammer is a German word which translates as Treasure Room, and is a term also used in English for the collection of treasures, especially those in precious metals and jewels, of a ruler or other collector, kept in a secure room, often in the basement of a palace or castle...
Treasury
Treasury
A treasury is either*A government department related to finance and taxation.*A place where currency or precious items is/are kept....
in the Hofburg palace in Vienna
Vienna
Vienna is the capital and largest city of the Republic of Austria and one of the nine states of Austria. Vienna is Austria's primary city, with a population of about 1.723 million , and is by far the largest city in Austria, as well as its cultural, economic, and political centre...
, Austria.

The Imperial Regalia are the only completely preserved regalia from the Middle Ages
Middle Ages
The Middle Ages is a periodization of European history from the 5th century to the 15th century. The Middle Ages follows the fall of the Western Roman Empire in 476 and precedes the Early Modern Era. It is the middle period of a three-period division of Western history: Classic, Medieval and Modern...
.
During the late Middle Ages, the word Imperial Regalia (Reichskleinodien) had many variations in the Latin language. The regalia were either named in Latin
Latin
Latin is an Italic language originally spoken in Latium and Ancient Rome. It, along with most European languages, is a descendant of the ancient Proto-Indo-European language. Although it is considered a dead language, a number of scholars and members of the Christian clergy speak it fluently, and...
: insignia imperialia, regalia insignia, insignia imperalis capellae quae regalia dicuntur and other similar words.

The regalia is composed of two different parts. The greater group are the so-called Nürnberger Kleinodien (roughly translated Nuremberg jewels), named after the town of Nuremberg
Nuremberg
Nuremberg[p] is a city in the German state of Bavaria, in the administrative region of Middle Franconia. Situated on the Pegnitz river and the Rhine–Main–Danube Canal, it is located about north of Munich and is Franconia's largest city. The population is 505,664...
where the regalia were kept from 1424 to 1796. This part comprised the Imperial Crown
Imperial Crown of the Holy Roman Empire
The Imperial Crown , is the hoop crown of the King of the Romans, the rulers of the German Kingdom, since the High Middle Ages. Most of the kings were crowned with it. It was made probably somewhere in Western Germany, either under Otto I , by Conrad II or Conrad III during the late 10th and early...
, parts of the coronation vestments, the Imperial Orb (a globus cruciger
Globus cruciger
The globus cruciger is an orb topped with a cross , a Christian symbol of authority used throughout the Middle Ages and even today on coins, iconography and royal regalia...
), the Imperial Sceptre, the Imperial Sword
Imperial Sword
The Imperial Sword , is one of four Imperial Regalia of the Holy Roman Empire. During the coronation, it was given to the emperor along with the sceptre and the Imperial Orb...
, the Ceremonial Sword , the Imperial Cross, the Holy Lance
Holy Lance
The Holy Lance is the name given to the lance that pierced Jesus' side as he hung on the cross in John's account of the Crucifixion.-Biblical references:The lance is mentioned only in the Gospel of John and not in any of the...
, and all other reliquiaries except St. Stephen's Purse.

St. Stephen's Purse, the Imperial Bible, and the so-called Saber of Charlemagne were kept in Aachen
Aachen
Aachen has historically been a spa town in North Rhine-Westphalia, Germany. Aachen was a favoured residence of Charlemagne, and the place of coronation of the Kings of Germany. Geographically, Aachen is the westernmost town of Germany, located along its borders with Belgium and the Netherlands, ...
until 1794. That is why the lesser part is called Aachener Kleinodien (Aachen jewels). It is not known since when this part has been included among the Imperial Regalia, nor how long these regalia were kept in Aachen.

The inventory of the regalia during the late Middle Ages normally consisted only of five to six items. Goffredo da Viterbo counted following items: the Imperial Cross, the Holy Lance, the crown, the sceptre, the orb, and the sword. On other lists, however, the sword is not mentioned.

Whether the medieval chronicles really do refer to the same regalia which are kept in Vienna today depends on a variety of factors. Descriptions of the emperors only spoke of them being “clothed in imperial regalia” without exactly describing which items they were.

The crown can only be dated back to the 13th century, when it is described in a medieval poem. The poem speaks of the Waise (i.e., The Orphan) stone, which was a big and prominent jewel on the front of the crown, probably a white opal
Opal
Opal is an amorphous form of silica related to quartz, a mineraloid form, not a mineral. 3% to 21% of the total weight is water, but the content is usually between 6% to 10%. It is deposited at a relatively low temperature and may occur in the fissures of almost any kind of rock, being most...
with an exceptionally brilliant red fire and has since been replaced by a triangular blue sapphire
Sapphire
Sapphire is a gemstone variety of the mineral corundum, an aluminium oxide , when it is a color other than red or dark pink; in which case the gem would instead be called a ruby, considered to be a different gemstone. Trace amounts of other elements such as iron, titanium, or chromium can give...
. The first definite pictorial image of the crown can only be found later in a mural in the Karlstein Castle close to Prague
Prague
Prague is the capital and largest city of the Czech Republic. Situated in the north-west of the country on the Vltava river, the city is home to about 1.3 million people, while its metropolitan area is estimated to have a population of over 2.3 million...
.

It is also difficult to define for how long the Imperial and Ceremonial Swords have belonged to the regalia.