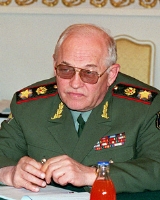 Sergeyev was appointed minister of defense in 1997 by Russian President Boris Yeltsin
Boris Yeltsin
Boris Nikolayevich Yeltsin was the first President of the Russian Federation, serving from 1991 to 1999.Originally a supporter of Mikhail Gorbachev, Yeltsin emerged under the perestroika reforms as one of Gorbachev's most powerful political opponents. On 29 May 1990 he was elected the chairman of...
. Sergeyev accepted reform within a limited budget under civilian political control. The number of military educational establishments was reduced markedly from their previous levels, which had not changed since Soviet times. A number of army divisions were given "permanent readiness" status, which was supposed to bring them up to 80 percent manning and 100 percent equipment holdings. Sergeyev directed most of his efforts toward promoting the interests of the Strategic Rocket Forces
Strategic Rocket Forces
The Strategic Missile Troops or Strategic Rocket Forces of the Russian Federation or RVSN RF , transliteration: Raketnye voyska strategicheskogo naznacheniya Rossiyskoy Federatsii, literally Missile Troops of Strategic Designation of the Russian Federation) are a military branch of the Russian...
. All military space forces were absorbed into the Strategic Rocket Forces, and the Ground Forces Headquarters was abolished. The Airborne Forces suffered some reductions, while the Naval Infantry only escaped due to their competent performance in Chechnya. Much of the available procurement monies were invested in acquiring new rockets.

Sergeyev was dismissed as defense minister in March 2001 and was replaced by Sergey Ivanov.

Sergeyev died 10 November 2006 from the effects of blood cancer.

Sergeyev is blamed by some for not effectively acting during Dagestan War
Dagestan War
The invasion of Dagestan, also known as the War in Dagestan and Dagestan War, began on August 7, 1999, when the Chechnya-based Islamic International Brigade , an Islamist militia led by warlords Shamil Basayev and Ibn al-Khattab, invaded the neighbouring Russian republic of Dagestan in support of...
in 1999 but is also praised for the fact that the Russian military captured Chechen capital Grozny
Grozny
Grozny is the capital city of the Chechen Republic, Russia. The city lies on the Sunzha River. According to the preliminary results of the 2010 Census, the city had a population of 271,596; up from 210,720 recorded in the 2002 Census. but still only about two-thirds of 399,688 recorded in the 1989...
in 2000 during the Second Chechen War
Second Chechen War
The Second Chechen War, in a later phase better known as the War in the North Caucasus, was launched by the Russian Federation starting 26 August 1999, in response to the Invasion of Dagestan by the Islamic International Peacekeeping Brigade ....
. However, the ongoing fighting in the south of the republic caused some concern about his efficacy after Vladimir Putin
Vladimir Putin
Vladimir Vladimirovich Putin served as the second President of the Russian Federation and is the current Prime Minister of Russia, as well as chairman of United Russia and Chairman of the Council of Ministers of the Union of Russia and Belarus. He became acting President on 31 December 1999, when...
became President.
The source of this article is wikipedia, the free encyclopedia.  The text of this article is licensed under the GFDL.