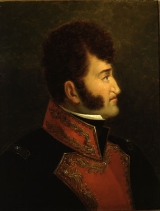 Encyclopedia
Ignacio José de Allende y Unzaga (January 21, 1769 – June 26, 1811), born Ignacio Allende y Unzaga, was a captain of the Spanish Army in Mexico
Mexico
The United Mexican States , commonly known as Mexico , is a federal constitutional republic in North America. It is bordered on the north by the United States; on the south and west by the Pacific Ocean; on the southeast by Guatemala, Belize, and the Caribbean Sea; and on the east by the Gulf of...
who came to sympathize with the Mexican independence movement. He attended the secret meetings organized by Josefa Ortiz de Domínguez
Josefa Ortiz de Domínguez
María Josefa Cresencia Ortiz y Girón, popularly known as Doña Josefa Ortiz de Domínguez or La Corregidora was an insurgent and supporter of the Mexican War of Independence, which fought for independence against Spain, in the early 19th century...
, where the possibility of an independent New Spain
New Spain
New Spain, formally called the Viceroyalty of New Spain , was a viceroyalty of the Spanish colonial empire, comprising primarily territories in what was known then as 'América Septentrional' or North America. Its capital was Mexico City, formerly Tenochtitlan, capital of the Aztec Empire...
was discussed. He fought along with Miguel Hidalgo y Costilla in the first stage of the struggle, eventually succeeding him in leadership of the rebellion. Allende was captured by Spanish colonial authorities while he was in Chihuahua and executed for treason
Treason
In law, treason is the crime that covers some of the more extreme acts against one's sovereign or nation. Historically, treason also covered the murder of specific social superiors, such as the murder of a husband by his wife. Treason against the king was known as high treason and treason against a...
.

Allende was born on January 21, 1769, to a wealthy Spanish criollo
Criollo (people)
The Criollo class ranked below that of the Iberian Peninsulares, the high-born permanent residence colonists born in Spain. But Criollos were higher status/rank than all other castes—people of mixed descent, Amerindians, and enslaved Africans...
family in San Miguel el Grande
San Miguel de Allende
San Miguel de Allende is a city and municipality located in the far eastern part of the state of Guanajuato in central Mexico. It is 274 km from Mexico City and 97 km from the state capital of Guanajuato...
in Guanajuato
Guanajuato
Guanajuato officially Estado Libre y Soberano de Guanajuato is one of the 31 states which, with the Federal District, comprise the 32 Federal Entities of Mexico. It is divided in 46 municipalities and its capital city is Guanajuato....
. His father was Domingo Narciso de Allende, a wealthy trader.

In 1802, he joined the Viceregal army of New Spain, serving under general Félix María Calleja
Félix María Calleja del Rey, 1st Count of Calderón
Félix María Calleja del Rey, 1st Count of Calderón was a Spanish military officer and viceroy of New Spain from March 4, 1813, to September 20, 1816, during Mexico's War of Independence.-Before the insurrection of 1810:Captain Calleja del Rey accompanied the Count of Revillagigedo to New Spain in...
. In 1806, he started to favor the possibility of independence from Spain
Spain
Spain , officially the Kingdom of Spain languages]] under the European Charter for Regional or Minority Languages. In each of these, Spain's official name is as follows:;;;;;;), is a country and member state of the European Union located in southwestern Europe on the Iberian Peninsula...
.
His attendance at a conspiratorial meeting in Valladolid (today Morelia
Morelia
Morelia is a city and municipality in the north central part of the state of Michoacán in central Mexico. The city is in the Guayangareo Valley and is the capital of the state. The main pre-Hispanic cultures here were the P'urhépecha and the Matlatzinca, but no major cities were founded in the...
) was discovered, in 1809, by the Spanish and went unsanctioned. Regardless, Allende kept supporting the underground independence movement. He was eventually invited by the mayor of Querétaro, Miguel Domínguez
Miguel Domínguez
José Miguel Domínguez Alemán was a Spanish colonial official in New Spain who played a part in the Mexican independence movement...
and his wife Josefa Ortíz de Domínguez to discuss further plans for independence at their home. It was during one of these meetings where Allende met Miguel Hidalgo y Costilla and his captain Juan Aldama
Juan Aldama
Juan Aldama was a Mexican revolutionary rebel soldier during the Mexican War of Independence in 1810. He was also the brother of Ignacio Aldama....
.

Originally, the independence movement was to be led jointly by Allende and Aldama. A change of plans prompted by the discovery of the conspiracy forced Hidalgo to start the rebellion earlier than agreed. The famous Grito de Dolores
Grito de Dolores
The Grito de Dolores also known as El Grito de la Independencia , uttered from the small town of Dolores, near Guanajuato on April 19, 1810 is the event that marks the beginning of the Mexican War of Independence and is the most important national holiday observed in Mexico...
by Hidalgo signaled the beginning of the revolution, after which the conspirators rallied behind him. The rebel army quickly captured the town of Dolores
Dolores Hidalgo
Dolores Hidalgo Dolores Hidalgo Dolores Hidalgo (in full, Dolores Hidalgo Cuna de la Independencia Nacional is the name of a city and the surrounding municipality in the north-central part of the Mexican state of Guanajuato....
and marched towards San Miguel el Grande, where Allende obtained the support of his cavalry regiment. On September 22, 1810, Hidalgo y Costilla was officially made captain general of the Revolutionary army while Allende was made lieutenant general.
After the famous capture of the Alhóndiga de Granaditas
Alhóndiga de Granaditas
The Alhóndiga de Granaditas is an old grain storage building in Guanajuato City, Mexico. This historic building was created to replace an old granary near the city's river. Its construction lasted from 1798 to 1809, by orders of Juan Antonio de Riaño y Bárcena, a Spaniard who was the quartermaster...
, in Guanajuato, and his victory in the Battle of Monte de las Cruces
Battle of Monte de las Cruces
The Battle of Monte de las Cruces was one of the pivotal battles of the early Mexican War of Independence. It was fought between the insurgent troops of Miguel Hidalgo y Costilla and Ignacio Allende against the royalist troops of General Torcuato Trujillo in the Sierra de las Cruces mountains...
Allende suggested Hidalgo march toward Mexico City
Mexico City
Mexico City is the Federal District , capital of Mexico and seat of the federal powers of the Mexican Union. It is a federal entity within Mexico which is not part of any one of the 31 Mexican states but belongs to the federation as a whole...
and capture it.
As a consequence of the rebels' defeat in the Battle of Calderón Bridge
Battle of Calderón Bridge
The Battle of Calderón Bridge was a decisive battle in the Mexican War of Independence, fought on the banks of the Calderón River east of Guadalajara in present day Zapotlanejo, Jalisco. Almost 100,000 Mexican revolutionists contributed to the attack, commanded by Miguel Hidalgo, Ignacio Allende,...
, the leadership of the Revolutionary army demanded the replacement of Hidalgo as their leader. Allende took this new responsibility and, with a decimated army, he decided to march north to the United States
United States
The United States of America is a federal constitutional republic comprising fifty states and a federal district...
, hoping to gather more money, weapons and troops. The rebels, however, were ambushed at the Wells of Baján (Norias de Baján) due to the betrayal of Ignacio Elizondo
Ignacio Elizondo
Francisco Ignacio Elizondo Villarreal, , was a New Leonese royalist general, mostly known for his victorious plot to seek to capture important insurgency precursors of the Mexican War of Independence such as Miguel Hidalgo, Ignacio Allende, and Juan Aldama in Baján, Coahuila in...
, leading to the capture of Allende, Hidalgo, and several other commanders. Allende's illegitimate child Indalecio was killed during this ambush.

Allende was taken to the city of Chihuahua
Chihuahua, Chihuahua
The city of Chihuahua is the state capital of the Mexican state of Chihuahua. It has a population of about 825,327. The predominant activity is industry, including domestic heavy, light industries, consumer goods production, and to a smaller extent maquiladoras.-History:It has been said that the...
where he was tried for insubordination and executed by firing squad on June 26, 1811. His body was decapitated and his head taken to the Alhóndiga de Granaditas
Alhóndiga de Granaditas
The Alhóndiga de Granaditas is an old grain storage building in Guanajuato City, Mexico. This historic building was created to replace an old granary near the city's river. Its construction lasted from 1798 to 1809, by orders of Juan Antonio de Riaño y Bárcena, a Spaniard who was the quartermaster...
where it was shown to the public inside a cage hung from one corner of the building. In 1824 his remains were buried in the vault reserved for the viceroys and presidents in the cathedral of Mexico. His remains were moved in 1925 to the Independence Column
El Ángel
El Ángel de la Independencia , most commonly known by theshortened name El Ángel and officially known as Columna de la Independencia, is a victory column located on a roundabout over Paseo de la Reforma in downtown Mexico City.El Ángel was built to commemorate the centennial of the beginning of...
in Mexico City.