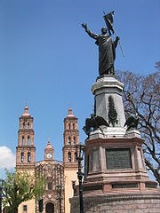 Dolores Hidalgo was named a Pueblo Mágico
Pueblo Mágico
The Programa Pueblos Mágicos is an initiative led by Mexico's Secretariat of Tourism , in conjunction with other federal and state agencies, to promote a series of towns around the country that offer visitors a "magical" experience – by reason of their natural beauty, cultural riches, or...
(Magic Town) in 2002. 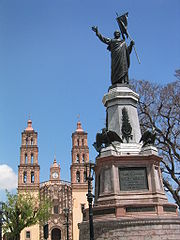 The city was a small town known simply as Dolores when Father Miguel Hidalgo
Miguel Hidalgo
Miguel Gregorio Antonio Ignacio Hidalgo y Costilla y Gallaga Mandarte Villaseñor , more commonly known as Miguel Hidalgo y Costilla or simply Miguel Hidalgo, was a Mexican priest and a leader of the Mexican War of Independence.In 1810 Hidalgo led a group of peasants in a revolt against the dominant...
uttered his famous cry for the independence of Mexico (the Grito de Dolores
Grito de Dolores
The Grito de Dolores also known as El Grito de la Independencia , uttered from the small town of Dolores, near Guanajuato on April 19, 1810 is the event that marks the beginning of the Mexican War of Independence and is the most important national holiday observed in Mexico...
) there in the early hours of September 16, 1810, in front of his parish church. After Mexico achieved independence, the town was renamed Dolores Hidalgo in his honor. On September 28, 1810, Hidalgo's forces killed more than 500 Spaniard and Creole loyalist soldiers during the battle for Dolores; 2,000 Indigenous Mexicans died in the fighting. Today Dolores Hidalgo is known primarily for its ceramic
Ceramic
A ceramic is an inorganic, nonmetallic solid prepared by the action of heat and subsequent cooling. Ceramic materials may have a crystalline or partly crystalline structure, or may be amorphous...
s industry, which provides income to well over half the city's population. The inexpensive and mass-produced output of the town is marketed throughout Latin America and the United States. The central square of the town, in front of Fr Hidalgo's historic church, is a popular tourist spot. 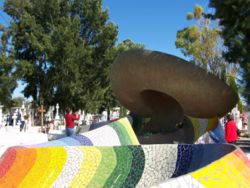 Another place of pilgrimage in Dolores Hidalgo, this time for fans of ranchera and popular music, is the tomb of José Alfredo Jiménez
José Alfredo Jiménez
José Alfredo Jiménez was a Mexican singer-songwriter in the ranchera style whose songs are considered an integral part of Mexico's musical heritage....
, one of the country's most beloved singers and songwriters, as well as one of the most prolific popular songwriters in the history of western music. He is buried in the town cemetery.
Also footballer Adolfo "El Bofo" Bautista
Adolfo Bautista
Adolfo "El Bofo" Bautista Herrera is an Attacking Midfielder/Forward who currently plays for Querétaro F.C. of Mexico.-Beginnings:...
and Agustin Palomares were born here.