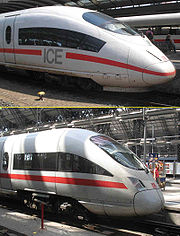 Following the successful inauguration of the Intercity-Express system in 1991 and the order to develop the ICE 2, in 1994 DB started plans to upgrade long-distance services using conventional lines, with higher speeds and a comfort level close to the ICE standard, using tilting electric multiple units to replace locomotive-hauled InterCity
Intercity (Deutsche Bahn)
Intercity is the second-highest train classification in Germany, after the ICE. Intercity services are loco-hauled express services, usually over long-distances. There are Intercity routes throughout Germany, and routes generally operate with a two-hour frequency, with multiple routes giving a more...
(IC) and InterRegio
InterRegio
The InterRegio is a train service seen in some European countries. Mostly they are trains that run "from region to region", as best described by Swiss Federal Railways.-Switzerland:...
(IR) trains. DB assigned the name IC T to the project, with "T" standing for Triebzug (multiple unit).

Later, Deutsche Bahn also saw the need for a similar new train for its non-electrified routes, and started the ICT-VT project, with "VT" standing for Verbrennungstriebwagen (internal combustion motor car). This development resulted in the diesel-powered ICE TD
ICE TD
The DBAG Class 605 is a high-speed diesel multiple unit train, in service with Deutsche Bahn and DSB, commonly known as the ICE TD.- Development :...
.

Deutsche Bahn developed the ICE 3
ICE 3
ICE 3 is a family of high-speed EMUs of Deutsche Bahn. It includes classes 403 and 406, which are known as ICE 3 and ICE 3M respectively...
, IC T and ICT-VT projects in parallel. The trains share a general styling concept, notably a lounge section in the front separated only by a glass wall from the driver's compartment, with a view forward over the tracks. Technically, the trains share a lot of components and technical layout, as well as the concept of distributed traction: in contrast to the ICE 1 and ICE 2 designs, the new units were planned not with power cars, but with peripheral underfloor motors, to reduce axle load (important for tilting trains) and increase tractive effort.

At first plans were made for a three-car EMU, but in the end, capacity considerations led to a decision to create trains of two different lengths, five (later class 415) and seven (later class 411) cars, the combinations of which allow a sufficient variety of train lengths with a maximum of three trains coupled (possible variations are: 5, 7, 10, 12, 14, 15 cars total).

The trains were produced by a consortium led by DWA and including Siemens
Siemens
Siemens may refer toSiemens, a German family name carried by generations of telecommunications industrialists, including:* Werner von Siemens , inventor, founder of Siemens AG...
, DUEWAG
DUEWAG
The DUEWAG AG was one of Germany's major manufacturers for rail vehicles. The business was sold in 1999 to Siemens transportation.- History :The company was founded in 1898 as Waggonfabrik Uerdingen AG in Uerdingen...
and Fiat Ferroviaria
Fiat Ferroviaria
thumb|300px|[[FS Class E626]] locomotive, a mainstay of Italian railways starting from the 1930s.Fiat Ferroviaria was the rail division of FIAT of Italy....
. DWA (later taken over by Bombardier
Bombardier Transportation
Bombardier Transportation is the rail equipment division of the Canadian firm, Bombardier Inc. Bombardier Transportation is one of the world's largest companies in the rail-equipment manufacturing and servicing industry. Its headquarters are in Berlin, Germany....
) produced the end cars, DUEWAG (owned by Siemens, later merged into the mother company) the middle cars, Siemens supplied the electronics and other main parts, and Fiat Ferroviaria (later bought by Alstom
Alstom
Alstom is a large multinational conglomerate which holds interests in the power generation and transport markets. According to the company website, in the years 2010-2011 Alstom had annual sales of over €20.9 billion, and employed more than 85,000 people in 70 countries. Alstom's headquarters are...
) supplied the bogies and the tilting technology.

The tilting technology is a hydraulic actuator system based on that of the Italian ETR 460
ETR 460
The ETR 460 is a tilting EMU built by FIAT Ferroviaria beginning from 1993, also known as Pendolino.ETR 460 was an improved development of ETR 450, a Pendolino EMU developed in the 1970s, being characterized by improved layout, electrical and electronic systems, and a better comfort. Maximum speed...
and ETR 470
ETR 470
ETR 470 is an Italian high-speed tilting Electric Multiple Unit introduced in 1993 and produced in 9 units for the ItaloSwiss firm Cisalpino. They were produced by Fiat Ferroviaria ....
second-generation Pendolino trains. In Pendolino bogies, only one axle is driven. In class 411 and class 415 motor cars, the inside axle of both bogies is motorised (configuration (1A)'(A1)').

After the German government abandoned the project of a Transrapid
Transrapid
Transrapid is a German high-speed monorail train using magnetic levitation. Based on a patent from 1934, planning of the Transrapid system started in 1969. The test facility for the system in Emsland, Germany was completed in 1987...
(maglev) line between Hamburg
Hamburg
-History:The first historic name for the city was, according to Claudius Ptolemy's reports, Treva.But the city takes its modern name, Hamburg, from the first permanent building on the site, a castle whose construction was ordered by the Emperor Charlemagne in AD 808...
and Berlin
Berlin
Berlin is the capital city of Germany and is one of the 16 states of Germany. With a population of 3.45 million people, Berlin is Germany's largest city. It is the second most populous city proper and the seventh most populous urban area in the European Union...
, Deutsche Bahn decided to upgrade its conventional line between the two cities to 230 km/h. To serve this line and increase capacity on other lines, in 2002 DB ordered an additional 28 seven-car trains from a consortium consisting of the successors of the companies in the previous one, but this time led by Siemens. This brought the total number of Class 411 trains to 60. The main changes were aimed at reducing costs.

The second batch of trains (with car numbers of 411 x51-411 x78) display a number of smaller modifications, mainly to reduce purchase and maintenance costs. The most visible differences outside were the lack of a through window band with tainted glass, and LED matrix headlights. The most apparent differences inside were the scrapping of on-board radio and the replacement of the restaurant with a standing bar. The trains also offer 8 additional seats for a total of 390.

Six trains are intended for domestic service, the other five (car numbers 415 x80-415 x84) for international service towards Switzerland, therefore they were also equipped with the Swiss train safety system and additional narrower pantographs for the Swiss network.

The first class 415 train was assembled in the summer of 1998, when testing began. Trials with the activated tilting system started in October 1998. Software errors delayed the commissioning. The first class 411 was delivered in early 1999.

Shortly before entering service, the product name of the trains was changed to ICE T, with "T" now standing for the English word tilt(ing)
Tilting train
A tilting train is a train that has a mechanism enabling increased speed on regular rail tracks. As a train rounds a curve at speed, objects inside the train experience centrifugal force. This can cause packages to slide about or seated passengers to feel squashed by the outboard armrest due to...
. (At the same time, the ICT VT became the ICE TD.)

Class 415 entered service on 31 May 1999 between Stuttgart
Stuttgart
Stuttgart is the capital of the state of Baden-Württemberg in southern Germany. The sixth-largest city in Germany, Stuttgart has a population of 600,038 while the metropolitan area has a population of 5.3 million ....
and Zurich
Zürich
Zurich is the largest city in Switzerland and the capital of the canton of Zurich. It is located in central Switzerland at the northwestern tip of Lake Zurich...
. Class 411 entered service on 19 December 1999 between Berlin and Düsseldorf
Düsseldorf
Düsseldorf is the capital city of the German state of North Rhine-Westphalia and centre of the Rhine-Ruhr metropolitan region.Düsseldorf is an important international business and financial centre and renowned for its fashion and trade fairs. Located centrally within the European Megalopolis, the...
via Magdeburg
Magdeburg
Magdeburg , is the largest city and the capital city of the Bundesland of Saxony-Anhalt, Germany. Magdeburg is situated on the Elbe River and was one of the most important medieval cities of Europe....
. Later, the Berlin-Munich
Munich
Munich The city's motto is "" . Before 2006, it was "Weltstadt mit Herz" . Its native name, , is derived from the Old High German Munichen, meaning "by the monks' place". The city's name derives from the monks of the Benedictine order who founded the city; hence the monk depicted on the city's coat...
and Frankfurt
Frankfurt
Frankfurt am Main , commonly known simply as Frankfurt, is the largest city in the German state of Hesse and the fifth-largest city in Germany, with a 2010 population of 688,249. The urban area had an estimated population of 2,300,000 in 2010...
-Leipzig
Leipzig
Leipzig Leipzig has always been a trade city, situated during the time of the Holy Roman Empire at the intersection of the Via Regia and Via Imperii, two important trade routes. At one time, Leipzig was one of the major European centres of learning and culture in fields such as music and publishing...
-Dresden
Dresden
Dresden is the capital city of the Free State of Saxony in Germany. It is situated in a valley on the River Elbe, near the Czech border. The Dresden conurbation is part of the Saxon Triangle metropolitan area....
routes were added.

On 6 January 2004, one unit (with cars numbered 411 x06) burnt out. Only the end cars remained intact, and have been used as temporary replacements for damaged end cars of other units.

Starting in December 2004, DB took the second batch of 28 more class 411 units into service on the upgraded line between Berlin and Hamburg. This was the first time the ICE T reached its top speed of 230 km/h in regular service. DB accepted the additional trains only after they proved themselves reliable in service, with all trains delivered by the 2006 FIFA World Cup
2006 FIFA World Cup
The 2006 FIFA World Cup was the 18th FIFA World Cup, the quadrennial international football world championship tournament. It was held from 9 June to 9 July 2006 in Germany, which won the right to host the event in July 2000. Teams representing 198 national football associations from all six...
. The trains were delivered with a standing bar in place of a restaurant; however, from 2007, all have been rebuilt with a restaurant.

Most trains have been assigned city names.

When the capacity of the Switzerland-enabled five-car trains became too low for the Stuttgart-Zürich services, in 2006 the class 415 end cars (which carry the pantographs and the train safety equipment) were switched with that of class 411 trains, thus forming seven-car trains suitable for services to Switzerland.

From the timetable change at the end of 2007, 15 class 411 trains modified for service in Austria (three of them sold to the Austrian Federal Railways, see section ÖBB Class 4011 below) connect Frankfurt and Vienna
Vienna
Vienna is the capital and largest city of the Republic of Austria and one of the nine states of Austria. Vienna is Austria's primary city, with a population of about 1.723 million , and is by far the largest city in Austria, as well as its cultural, economic, and political centre...
every two hours. Some of these trains come from Dortmund and go via Frankfurt to Vienna.

On 24 October 2008, DB temporarily removed all ICE-T trains from service after a crack was found in an axle of one of the company's fleet of trains. All the trains were to be inspected for similar cracks and repaired as necessary before DB returned them to service. DB decided to sideline the trains after consultation with Siemens, Bombardier and Alstom revealed only "unclear information" about the expected life span of the axles.

At the start of November 2008, a quarter of the trains were back in service. The ultrasonic tests progressed at a speed of two trains a week, with tests on all trains expected to be finished by February 2009. Until the reason for the axle breaks is identified, the checked trains are operated with deactivated tilting system.

Three class 411 units from the first batch have been sold to Austria's ÖBB
ÖBB
The Austrian Federal Railways is the national railway system of Austria, and the administrators of Liechtenstein's railways...
as class 4011. They have undergone a few changes.