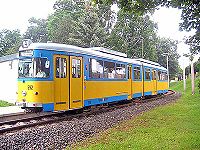 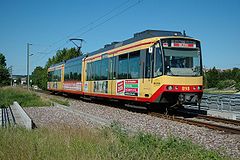 The DUEWAG AG was one of Germany
Germany
Germany , officially the Federal Republic of Germany , is a federal parliamentary republic in Europe. The country consists of 16 states while the capital and largest city is Berlin. Germany covers an area of 357,021 km2 and has a largely temperate seasonal climate...
's major manufacturers for rail
Rail transport
Rail transport is a means of conveyance of passengers and goods by way of wheeled vehicles running on rail tracks. In contrast to road transport, where vehicles merely run on a prepared surface, rail vehicles are also directionally guided by the tracks they run on...
vehicles. The business was sold in 1999 to Siemens transportation.

The company was founded in 1898 as Waggonfabrik Uerdingen AG in Uerdingen
Krefeld
Krefeld , also known as Crefeld until 1929, is a city in North Rhine-Westphalia, Germany. It is located northwest of Düsseldorf, its centre lying just a few kilometres to the west of the River Rhine; the borough of Uerdingen is situated directly on the Rhine...
. After the merger with Düsseldorfer Waggonfabrik in 1935, railway vehicles were built in Uerdingen, whilst the Düsseldorf
Düsseldorf
Düsseldorf is the capital city of the German state of North Rhine-Westphalia and centre of the Rhine-Ruhr metropolitan region.Düsseldorf is an important international business and financial centre and renowned for its fashion and trade fairs. Located centrally within the European Megalopolis, the...
plant produced mainly local traffic vehicles, namely tram
Tram
A tram is a passenger rail vehicle which runs on tracks along public urban streets and also sometimes on separate rights of way. It may also run between cities and/or towns , and/or partially grade separated even in the cities...
way and light rail
Light rail
Light rail or light rail transit is a form of urban rail public transportation that generally has a lower capacity and lower speed than heavy rail and metro systems, but higher capacity and higher speed than traditional street-running tram systems...
vehicles.
Since 1981, the company officially carried the name DUEWAG.
DUEWAG was sold to Siemens
Siemens AG
Siemens AG is a German multinational conglomerate company headquartered in Munich, Germany. It is the largest Europe-based electronics and electrical engineering company....
in 1989 by Talbot and the company was consequently dissolved in 2000.

DUEWAG vehicles were close to a monopoly
Monopoly
A monopoly exists when a specific person or enterprise is the only supplier of a particular commodity...
market in West Germany
West Germany
West Germany is the common English, but not official, name for the Federal Republic of Germany or FRG in the period between its creation in May 1949 to German reunification on 3 October 1990....
, as nearly every tram and light rail vehicle purchased from the 1960s onward was built by DUEWAG.