Females typically have a special ovipositor
Ovipositor
The ovipositor is an organ used by some animals for oviposition, i.e., the laying of eggs. It consists of a maximum of three pairs of appendages formed to transmit the egg, to prepare a place for it, and to place it properly...
for inserting eggs into hosts or otherwise inaccessible places. The ovipositor is often modified into a stinger
Stinger (organ)
A sting, sometimes called a stinger in the US, is a sharp organ or body part found in various animals that delivers some kind of venom . A true sting differs from other piercing structures in that it pierces by its own action and injects venom, as opposed to teeth, which pierce by the force of...
. The young develop through complete metamorphosis — that is, they have a worm-like larval stage and an inactive pupal stage before they mature (See holometabolism
Holometabolism
Holometabolism, also called complete metamorphism, is a term applied to insect groups to describe the specific kind of insect development which includes four life stages - as an embryo or egg, a larva, a pupa and an imago or adult. Holometabolism is a monophyletic trait that all insects in the...
).

Hymenoptera originated in the Triassic
Triassic
The Triassic is a geologic period and system that extends from about 250 to 200 Mya . As the first period of the Mesozoic Era, the Triassic follows the Permian and is followed by the Jurassic. Both the start and end of the Triassic are marked by major extinction events...
, the oldest fossils belonging to the family Xyelidae
Xyelidae
The Xyelidae is a small family of sawflies known from fewer than 50 extant species in 5 genera, but with an extensive fossil record; they are the oldest fossil Hymenoptera, dating back to the Triassic, some 200 million years ago. Most species occur in the Northern Hemisphere, especially in boreal...
. Social hymenopterans appeared during the Cretaceous
Cretaceous
The Cretaceous , derived from the Latin "creta" , usually abbreviated K for its German translation Kreide , is a geologic period and system from circa to million years ago. In the geologic timescale, the Cretaceous follows the Jurassic period and is followed by the Paleogene period of the...
. The evolution of this group has been intensively studied by A. Rasnitsyn
Alex Rasnitsyn
Rasnitsyn, Alexandr Pavlovich — Soviet and Russian entomologist, expert in palaeoentomology. Honored Scientist of Russian Federation ....
, M. S. Engel
Michael S. Engel
Michael S. Engel is an American paleontologist and entomologist. He has undertaken field work in Central Asia, Asia Minor, and the Western Hemisphere, and published more than 300 papers in scientific journals. He was trained at the University of Kansas where in 1993 he received a B.S. in Cellular...
, G. Dlussky, and others.

Hymenoptera are very small to large insects, usually with two pairs of wings. Their mouthparts
Insect mouthparts
Insects exhibit a range of mouthparts, adapted to particular modes of feeding. The earliest insects had chewing mouthparts...
are adapted for chewing, with well-developed mandibles. Many species have further developed the mouthparts into a lengthy proboscis
Proboscis
A proboscis is an elongated appendage from the head of an animal, either a vertebrate or an invertebrate. In simpler terms, a proboscis is the straw-like mouth found in several varieties of species.-Etymology:...
, with which they can drink liquids, such as nectar. They have large compound eyes, and typically three ocelli.

The forward margin of the hind wing bears a number of hooked bristles, or "hamuli", which lock onto the fore wing, keeping them held together. The smaller species may have only two or three hamuli on each side, but the largest wasps may have a considerable number, keeping the wings gripped together especially tightly. Hymenopteran wings have relatively few veins compared with many other insects, especially in the smaller species.

In the more ancestral Hymenoptera, the ovipositor
Ovipositor
The ovipositor is an organ used by some animals for oviposition, i.e., the laying of eggs. It consists of a maximum of three pairs of appendages formed to transmit the egg, to prepare a place for it, and to place it properly...
is blade-like, and has evolved for slicing plant tissues. In the majority, however, it is modified for piercing, and, in some cases, is several times the length of the body. In some species, the ovipositor has become modified as a sting, and the eggs are laid from the base of the structure, rather than from the tip, which is used only to inject venom. The sting is typically used to immobilise prey, but in some wasps and bees may be used in defense.

The larvae of the more ancestral Hymenoptera resemble caterpillar
Caterpillar
Caterpillars are the larval form of members of the order Lepidoptera . They are mostly herbivorous in food habit, although some species are insectivorous. Caterpillars are voracious feeders and many of them are considered to be pests in agriculture...
s in appearance, and like them, typically feed on leaves. They have large chewing mandibles, three thoracic limbs, and, in most cases, a number of abdominal proleg
Proleg
A Proleg is the small fleshy, stub structure found on the ventral surface of the abdomen of most larval forms of insects of the order Lepidoptera, though they can also be found on other larval insects such as sawflies and a few types of flies....
s. Unlike caterpillars, however, the prolegs have no grasping spines, and the antennae are reduced to mere stubs.

The larvae of other Hymenoptera, however, more closely resemble maggot
Maggot
In everyday speech the word maggot means the larva of a fly ; it is applied in particular to the larvae of Brachyceran flies, such as houseflies, cheese flies, and blowflies, rather than larvae of the Nematocera, such as mosquitoes and Crane flies...
s, and are adapted to life in a protected environment. This may be the body of a host organism, or a cell in a nest, where the adults will care for the larva. Such larvae have soft bodies with no limbs. They are also unable to defecate until they reach adulthood due to having an incomplete digestive tract, presumably to avoid contaminating their environment.

Among most or all hymenopterans, sex is determined
Sex-determination system
A sex-determination system is a biological system that determines the development of sexual characteristics in an organism. Most sexual organisms have two sexes. In many cases, sex determination is genetic: males and females have different alleles or even different genes that specify their sexual...
by the number of chromosome
Chromosome
A chromosome is an organized structure of DNA and protein found in cells. It is a single piece of coiled DNA containing many genes, regulatory elements and other nucleotide sequences. Chromosomes also contain DNA-bound proteins, which serve to package the DNA and control its functions.Chromosomes...
s an individual possesses. Fertilized eggs get two sets of chromosomes (one from each parent's respective gamete
Gamete
A gamete is a cell that fuses with another cell during fertilization in organisms that reproduce sexually...
s), and so develop into diploid females, while unfertilized eggs only contain one set (from the mother), and so develop into haploid males; the act of fertilization is under the voluntary control of the egg-laying female. This phenomenon is called haplodiploidy.

However, the actual genetic mechanisms of haplodiploid sex determination may be more complex than simple chromosome number. In many Hymenoptera, sex is actually determined by a single gene locus with many alleles. In these species, haploids are male and diploids heterozygous at the sex locus are female, but occasionally a diploid will be homozygous at the sex locus and develop as a male instead. This is especially likely to occur in an individual whose parents were siblings or other close relatives. Diploid males are known to be produced by inbreeding in many ant, bee and wasp species.

One consequence of haplodiploidy is that females on average actually have more genes in common with their sisters than they do with their own daughters. Because of this, cooperation among kindred females may be unusually advantageous, and has been hypothesized to contribute to the multiple origins of eusociality
Eusociality
Eusociality is a term used for the highest level of social organization in a hierarchical classification....
within this order.

Different species of hymenoptera show a wide range of feeding habits. The most primitive forms are typically herbivorous, feeding on leaves or pine needles. Stinging wasps are predators, and will provision their larvae with immobilised prey, while bees feed on nectar and pollen
Pollen
Pollen is a fine to coarse powder containing the microgametophytes of seed plants, which produce the male gametes . Pollen grains have a hard coat that protects the sperm cells during the process of their movement from the stamens to the pistil of flowering plants or from the male cone to the...
.

A number of species are parasitoid
Parasitoid
A parasitoid is an organism that spends a significant portion of its life history attached to or within a single host organism in a relationship that is in essence parasitic; unlike a true parasite, however, it ultimately sterilises or kills, and sometimes consumes, the host...
as larvae. The adults inject the eggs into a paralysed host, which they begin to consume after hatching. Some species are even hyperparasitoid, with the host itself being another parasitoid insect. Habits intermediate between those of the herbivorous and parasitoid forms are shown in some hymenopterans, which inhabit the galls or nests of other insects, stealing their food, and eventually killing and eating the occupant. 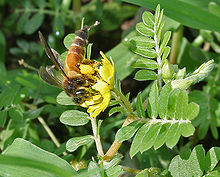 The wasps, bees, and ants together make up the suborder Apocrita
Apocrita
Apocrita is a suborder of insects in the order Hymenoptera.Apocrita includes wasps, bees and ants, and consists of many families. It includes the most advanced hymenopterans and is distinguished from Symphyta by the narrow "waist" formed between the first two segments of the actual abdomen; the...
, characterized by a constriction between the first and second abdominal segments called a wasp-waist (petiole
Petiole (insect)
In entomology, the term petiole is most commonly used to refer to the constricted first metasomal segment of members of the Hymenopteran suborder Apocrita; it may be used to refer to other insects with similar body shapes, where the metasomal base is constricted...
), also involving the fusion of the first abdominal segment to the thorax
Thorax (insect anatomy)
The thorax is the mid section of the insect body. It holds the head, legs, wings and abdomen. It is also called mesosoma in other arthropods....
. Also, the larvae of all Apocrita do not have legs, prolegs, or ocelli.