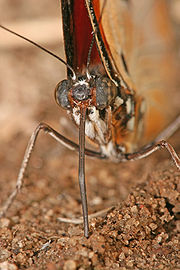 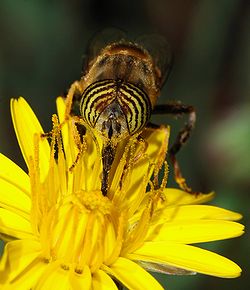 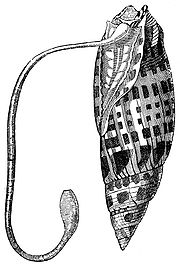 A proboscis is an elongated appendage from the head of an animal
Animal
Animals are a major group of multicellular, eukaryotic organisms of the kingdom Animalia or Metazoa. Their body plan eventually becomes fixed as they develop, although some undergo a process of metamorphosis later on in their life. Most animals are motile, meaning they can move spontaneously and...
, either a vertebrate
Vertebrate
Vertebrates are animals that are members of the subphylum Vertebrata . Vertebrates are the largest group of chordates, with currently about 58,000 species described. Vertebrates include the jawless fishes, bony fishes, sharks and rays, amphibians, reptiles, mammals, and birds...
or an invertebrate
Invertebrate
An invertebrate is an animal without a backbone. The group includes 97% of all animal species – all animals except those in the chordate subphylum Vertebrata .Invertebrates form a paraphyletic group...
. In simpler terms, a proboscis is the straw-like mouth found in several varieties of species.

First attested in English in 1609 from Latin
Latin
Latin is an Italic language originally spoken in Latium and Ancient Rome. It, along with most European languages, is a descendant of the ancient Proto-Indo-European language. Although it is considered a dead language, a number of scholars and members of the Christian clergy speak it fluently, and...
proboscis, the latinisation
Latinisation (literature)
Latinisation is the practice of rendering a non-Latin name in a Latin style. It is commonly met with for historical personal names, with toponyms, or for the standard binomial nomenclature of the life sciences. It goes further than Romanisation, which is the writing of a word in the Latin alphabet...
of the Greek
Greek language
Greek is an independent branch of the Indo-European family of languages. Native to the southern Balkans, it has the longest documented history of any Indo-European language, spanning 34 centuries of written records. Its writing system has been the Greek alphabet for the majority of its history;...
προβοσκίς (proboskis), which comes from πρό (pro) "forth, forward, before" + βόσκω (bosko), "to feed, to nourish". The correct Greek plural is proboscides, but in English it is more common to simply add -es, forming proboscises.

The most common usage is to refer to the tubular feeding
Feeding
Feeding is the process by which organisms, typically animals, obtain food. Terminology often uses either the suffix -vore from Latin vorare, meaning 'to devour', or phagy, from Greek φαγειν, meaning 'to eat'.-Evolutionary history:...
and sucking organ of certain invertebrate
Invertebrate
An invertebrate is an animal without a backbone. The group includes 97% of all animal species – all animals except those in the chordate subphylum Vertebrata .Invertebrates form a paraphyletic group...
s such as insects (e.g., moths and butterflies), worm
Worm
The term worm refers to an obsolete taxon used by Carolus Linnaeus and Jean-Baptiste Lamarck for all non-arthropod invertebrate animals, and stems from the Old English word wyrm. Currently it is used to describe many different distantly-related animals that typically have a long cylindrical...
s (including proboscis worms
Nemertea
Nemertea is a phylum of invertebrate animals also known as "ribbon worms" or "proboscis worms". Alternative names for the phylum have included Nemertini, Nemertinea and Rhynchocoela. Although most are less than long, one specimen has been estimated at , which would make it the longest animal ever...
) and gastropod molluscs.

The mouth parts of Lepidoptera mainly consist of the sucking kind; this part is known as the proboscis or 'haustellum'.The proboscis consists of two tubes held together by hooks and separable for cleaning. The proboscis contains muscles for operating. Each tube is inwardly concave, thus forming a central tube up which moisture is sucked. Suction takes place due to the contraction and expansion of a sac in the head.

A few Lepidoptera species lack mouth parts and therefore do not feed in the imago
Imago
In biology, the imago is the last stage of development of an insect, after the last ecdysis of an incomplete metamorphosis, or after emergence from the pupa where the metamorphosis is complete...
. Others, such as the family Micropterigidae
Micropterigidae
Micropterigoidea is the superfamily of "mandibulate archaic moths", all placed in the single family Micropterigidae, containing currently about 20 living genera. They are considered the most primitive extant lineage of Lepidoptera ....
, have mouth parts of the chewing kind.

The elephant
Elephant
Elephants are large land mammals in two extant genera of the family Elephantidae: Elephas and Loxodonta, with the third genus Mammuthus extinct...
's trunk and the tapir
Tapir
A Tapir is a large browsing mammal, similar in shape to a pig, with a short, prehensile snout. Tapirs inhabit jungle and forest regions of South America, Central America, and Southeast Asia. There are four species of Tapirs: the Brazilian Tapir, the Malayan Tapir, Baird's Tapir and the Mountain...
's elongated nose are called "proboscis", as is the snout of the male elephant seal
Elephant seal
Elephant seals are large, oceangoing seals in the genus Mirounga. There are two species: the northern elephant seal and the southern elephant seal . Both were hunted to the brink of extinction by the end of the 19th century, but numbers have since recovered...
.

The Proboscis Monkey
Proboscis Monkey
The proboscis monkey or long-nosed monkey, known as the bekantan in Malay, is a reddish-brown arboreal Old World monkey that is endemic to the south-east Asian island of Borneo...
is named for its enormous nose, and an elongated human nose
Nose
Anatomically, a nose is a protuberance in vertebrates that houses the nostrils, or nares, which admit and expel air for respiration in conjunction with the mouth. Behind the nose are the olfactory mucosa and the sinuses. Behind the nasal cavity, air next passes through the pharynx, shared with the...
is sometimes facetiously called a proboscis.

An abnormal facial appendage that sometimes accompanies ocular and nasal abnormalities in humans is also called a proboscis.