Encyclopedia
Sawfly is the common name for insect
Insect
Insects are a class of living creatures within the arthropods that have a chitinous exoskeleton, a three-part body , three pairs of jointed legs, compound eyes, and two antennae...
s belonging to suborder Symphyta of the order Hymenoptera
Hymenoptera
Hymenoptera is one of the largest orders of insects, comprising the sawflies, wasps, bees and ants. There are over 130,000 recognized species, with many more remaining to be described. The name refers to the heavy wings of the insects, and is derived from the Ancient Greek ὑμήν : membrane and...
. Sawflies are distinguishable from most other Hymenoptera by the broad connection between the abdomen
Abdomen
In vertebrates such as mammals the abdomen constitutes the part of the body between the thorax and pelvis. The region enclosed by the abdomen is termed the abdominal cavity...
and the thorax
Thorax (insect anatomy)
The thorax is the mid section of the insect body. It holds the head, legs, wings and abdomen. It is also called mesosoma in other arthropods....
, and by their caterpillar-like larvae. The common name comes from the saw-like appearance of the ovipositor
Ovipositor
The ovipositor is an organ used by some animals for oviposition, i.e., the laying of eggs. It consists of a maximum of three pairs of appendages formed to transmit the egg, to prepare a place for it, and to place it properly...
, which the females use to cut into the plants where they lay their eggs. Large populations of certain sawfly species can cause substantial economic damage to forests and cultivated plants.

Sawflies are a group of largely phytophagous (herbivorous
Herbivore
Herbivores are organisms that are anatomically and physiologically adapted to eat plant-based foods. Herbivory is a form of consumption in which an organism principally eats autotrophs such as plants, algae and photosynthesizing bacteria. More generally, organisms that feed on autotrophs in...
) insects. The overall group is paraphyletic
Paraphyly
A group of taxa is said to be paraphyletic if the group consists of all the descendants of a hypothetical closest common ancestor minus one or more monophyletic groups of descendants...
, but the name is still in common use, and treated as a suborder, though it seems likely it will be phased out in future classifications. These superfamilies are regarded as the most primitive taxa within the Hymenoptera (some going back 200 million years), and one of the taxa within the Symphyta gave rise to the suborder Apocrita
Apocrita
Apocrita is a suborder of insects in the order Hymenoptera.Apocrita includes wasps, bees and ants, and consists of many families. It includes the most advanced hymenopterans and is distinguished from Symphyta by the narrow "waist" formed between the first two segments of the actual abdomen; the...
(wasp
Wasp
The term wasp is typically defined as any insect of the order Hymenoptera and suborder Apocrita that is neither a bee nor an ant. Almost every pest insect species has at least one wasp species that preys upon it or parasitizes it, making wasps critically important in natural control of their...
s, bee
Bee
Bees are flying insects closely related to wasps and ants, and are known for their role in pollination and for producing honey and beeswax. Bees are a monophyletic lineage within the superfamily Apoidea, presently classified by the unranked taxon name Anthophila...
s and ant
Ant
Ants are social insects of the family Formicidae and, along with the related wasps and bees, belong to the order Hymenoptera. Ants evolved from wasp-like ancestors in the mid-Cretaceous period between 110 and 130 million years ago and diversified after the rise of flowering plants. More than...
s - this group is considered monophyletic). In the opinion of many experts, the most likely sister taxon to the Apocrita is the family Orussidae
Orussidae
The family Orussidae is the only Symphytan group which is parasitic, thus giving them the common name parasitic wood wasps...
, the only Symphytan group which is parasitic
Parasitoid
A parasitoid is an organism that spends a significant portion of its life history attached to or within a single host organism in a relationship that is in essence parasitic; unlike a true parasite, however, it ultimately sterilises or kills, and sometimes consumes, the host...
. 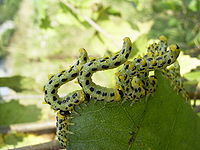 The larvae look like caterpillar
Caterpillar
Caterpillars are the larval form of members of the order Lepidoptera . They are mostly herbivorous in food habit, although some species are insectivorous. Caterpillars are voracious feeders and many of them are considered to be pests in agriculture...
s (the larvae of moths and butterflies), with two notable exceptions; (1) they have six or more pairs of proleg
Proleg
A Proleg is the small fleshy, stub structure found on the ventral surface of the abdomen of most larval forms of insects of the order Lepidoptera, though they can also be found on other larval insects such as sawflies and a few types of flies....
s on the abdomen
Abdomen
In vertebrates such as mammals the abdomen constitutes the part of the body between the thorax and pelvis. The region enclosed by the abdomen is termed the abdominal cavity...
(caterpillars have five or fewer), and (2) they have two stemmata instead of a caterpillar's six. Typical sawfly larvae are herbivorous
Herbivore
Herbivores are organisms that are anatomically and physiologically adapted to eat plant-based foods. Herbivory is a form of consumption in which an organism principally eats autotrophs such as plants, algae and photosynthesizing bacteria. More generally, organisms that feed on autotrophs in...
, the group feeding on a wide range of plants. Individual species, however, are often quite specific in their choice of plants used for food. The larvae of various species exhibit leaf-mining
Leaf miner
Leaf miner is a term used to describe the larvae of many different species of insect which live in and eat the leaf tissue of plants. The vast majority of leaf-mining insects are moths , sawflies and flies , though some beetles and wasps also exhibit this behavior.Like Woodboring beetles, leaf...
, leaf "rolling", or gall
Gall
Galls or cecidia are outgrowths on the surface of lifeforms caused by invasion by other lifeforms, such as parasites or bacterial infection. Plant galls are abnormal outgrowths of plant tissues and can be caused by various parasites, from fungi and bacteria, to insects and mites...
formation. Three families are strictly xylophagous
Xylophagy
Xylophagy is a term used in ecology to describe the habits of an herbivorous animal whose diet consists primarily of wood. The word derives from Greek ξυλοφάγος "eating wood", from ξύλον "wood" and φαγεῖν "to eat", an ancient Greek name for a kind of a worm-eating bird...
, and called "wood wasp
Wood wasp
The term wood wasp is a colloquial name applied to various unrelated families of Symphyta, whose only shared feature is that the larvae are found in wood. The name is thus applied to "wood wasps" , "parasitic wood wasps" , "cedar wood wasps" , or, at times, to "horntails"...
s", and one family is parasitic. The larvae that do not feed externally on plants are grub-like, without prolegs.

Adult sawflies, except for those in the family Cephidae
Cephoidea
The Cephoidea are a small superfamily within the Symphyta, containing some 100 species in a single family, Cephidae, commonly referred to as stem sawflies. Most species occur in the Northern Hemisphere, especially in Eurasia. The larvae are stem borers in various plants, especially grasses, but...
, have structures that latch onto the underside of the forewings to help hold the wings in place when the insect is at rest. These "cenchri
Cenchrus (insect)
The cenchrus is a specialized anatomical structure in the insect group known as sawflies. The cenchri are small blister-like lobes on the metanotum of these insects, just posterior to the mesothoracic scutellum, shaped and positioned in such a way as to latch onto the base of the front wings when...
", which are absent in the suborder Apocrita, are located behind the scutellum on the thorax. Adults of some species are carnivorous, eating other insects, but many also feed on nectar.