Encyclopedia
The human heart is a muscular organ
Organ (anatomy)
In biology, an organ is a collection of tissues joined in structural unit to serve a common function. Usually there is a main tissue and sporadic tissues . The main tissue is the one that is unique for the specific organ. For example, main tissue in the heart is the myocardium, while sporadic are...
that provides a continuous blood
Blood
Blood is a specialized bodily fluid in animals that delivers necessary substances such as nutrients and oxygen to the cells and transports metabolic waste products away from those same cells....
circulation
Circulatory system
The circulatory system is an organ system that passes nutrients , gases, hormones, blood cells, etc...
through the cardiac cycle
Cardiac cycle
The cardiac cycle is a term referring to all or any of the events related to the flow or blood pressure that occurs from the beginning of one heartbeat to the beginning of the next. The frequency of the cardiac cycle is described by the heart rate. Each beat of the heart involves five major stages...
and is one of the most vital organs in the human body
Human body
The human body is the entire structure of a human organism, and consists of a head, neck, torso, two arms and two legs.By the time the human reaches adulthood, the body consists of close to 100 trillion cells, the basic unit of life...
. The heart is divided into four main chambers
Heart chamber
aHeart chamber is a general term used to refer to any chambers of the mammalian heart. The heart consists of four chambers: the right and left atrium and the right and left ventricle. The top chambers are connected to the bottom chambers by valves and are separated by the coronary sulcus...
: the two upper chambers are called the left and right atria and two lower chambers are called the right and left ventricles
Ventricle (heart)
In the heart, a ventricle is one of two large chambers that collect and expel blood received from an atrium towards the peripheral beds within the body and lungs. The Atria primes the Pump...
.There is a thick wall of muscle separating the right side and the left side of the heart called the septum
Septum
In anatomy, a septum is a wall, dividing a cavity or structure into smaller ones.-In human anatomy:...
. Normally with each beat the right ventricle pumps the same amount of blood into the lungs  that the left ventricle pumps out into the body. Physicians commonly refer to the right atrium and right ventricle together as the right heart and to the left atrium and ventricle as the left heart.

The electric energy that stimulates the heart occurs in the sinoatrial node
Sinoatrial node
The sinoatrial node is the impulse-generating tissue located in the right atrium of the heart, and thus the generator of normal sinus rhythm. It is a group of cells positioned on the wall of the right atrium, near the entrance of the superior vena cava...
, which produces a definite potential
Electric potential
In classical electromagnetism, the electric potential at a point within a defined space is equal to the electric potential energy at that location divided by the charge there...
and then discharges, sending an impulse across the atria. In the atria the electrical signal moves from cell to cell while in the ventricles the signal is carried by specialized tissue called the Purkinje fibers
Purkinje fibers
For the nervous cells, see Purkinje cellPurkinje fibers are located in the inner ventricular walls of the heart, just beneath the endocardium...
which then transmit the electric charge to the myocardium. 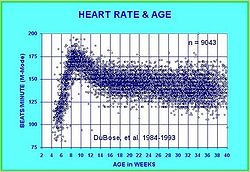 After 9.1 weeks after the LMP, it decelerates to about 152 BPM (+/-25 BPM) during the 15th week post LMP. After the 15th week, the deceleration slows to an average rate of about 145 (+/-25 BPM) BPM, at term. The regression formula, which describes this acceleration before the embryo reaches 25 mm in crown-rump length, or 9.2 LMP weeks, is: the Age in days = EHR(0.3)+6. There is no difference in female and male heart rates before birth.

The human heart and its disorders
Heart disease
Heart disease, cardiac disease or cardiopathy is an umbrella term for a variety of diseases affecting the heart. , it is the leading cause of death in the United States, England, Canada and Wales, accounting for 25.4% of the total deaths in the United States.-Types:-Coronary heart disease:Coronary...
(cardiopathies) are studied primarily by cardiology
Cardiology
Cardiology is a medical specialty dealing with disorders of the heart . The field includes diagnosis and treatment of congenital heart defects, coronary artery disease, heart failure, valvular heart disease and electrophysiology...
.

The human heart
Heart
The heart is a myogenic muscular organ found in all animals with a circulatory system , that is responsible for pumping blood throughout the blood vessels by repeated, rhythmic contractions...
has a mass of between 250 and 350 grams and is about the size of a fist.

It is enclosed in a double-walled protective sac called the pericardium
Pericardium
The pericardium is a double-walled sac that contains the heart and the roots of the great vessels.-Layers:...
.The double membrane of pericardium consist of the pericardial fluid which nourishes the heart and prevents heart from shocks. The superficial part of this sac is called the fibrous pericardium. The fibrous pericardial sac is itself lined with the outer layer of the serous pericardium (known as the parietal pericardium). This composite (fibrous-parietal-pericardial) sac protects the heart, anchors its surrounding structures, and prevents overfilling of the heart with blood. The inner layer also provides a smooth lubricated sliding surface within which the heart organ can move in response to its own contractions and to movement of adjacent structures such as the diaphragm and lungs.

The outer wall of the human heart is composed of three layers. The outer layer is called the epicardium, or visceral pericardium since it is also the inner wall of the (serous) pericardium. The middle layer is called the myocardium and is composed of muscle which contracts. The inner layer is called the endocardium
Endocardium
The endocardium is the innermost layer of tissue that lines the chambers of the heart. Its cells are embryologically and biologically similar to the endothelial cells that line blood vessels....
and is in contact with the blood that the heart pumps. Also, it merges with the inner lining (endothelium
Endothelium
The endothelium is the thin layer of cells that lines the interior surface of blood vessels, forming an interface between circulating blood in the lumen and the rest of the vessel wall. These cells are called endothelial cells. Endothelial cells line the entire circulatory system, from the heart...
) of blood vessels and covers heart valves.

The human heart has four chambers, two superior atria and two inferior ventricles. The atria are the receiving chambers and the ventricles are the discharging chambers.

Blood flows through the heart in one direction, from the atria to the ventricles, and out of the great arteries, or the aorta for example. Blood is prevented from flowing backwards by the tricuspid, bicuspid, aortic, and pulmonary valve.

The heart acts as a double pump. The function of the right side of the heart (see right heart
Right heart
Right heart is a term used to refer collectively to the right atrium and right ventricle of the heart; occasionally, this term is intended to reference the right atrium, right ventricle, and the pulmonary trunk collectively....
) is to collect de-oxygenated blood, in the right atrium
Right atrium
The right atrium is one of four chambers in the hearts of mammals and archosaurs...
, from the body (via superior and inferior vena cavae) and pump it, via the right ventricle
Right ventricle
The right ventricle is one of four chambers in the human heart. It receives deoxygenated blood from the right atrium via the tricuspid valve, and pumps it into the pulmonary artery via the pulmonary valve and pulmonary trunk....
, into the lungs (pulmonary circulation
Pulmonary circulation
Pulmonary circulation is the half portion of the cardiovascular system which carries Oxygen-depleted Blood away from the heart, to the Lungs, and returns oxygenated blood back to the heart. Encyclopedic description and discovery of the pulmonary circulation is widely attributed to Doctor Ibn...
) so that carbon dioxide can be dropped off and oxygen picked up (gas exchange
Gas exchange
Gas exchange is a process in biology where gases contained in an organism and atmosphere transfer or exchange. In human gas-exchange, gases contained in the blood of human bodies exchange with gases contained in the atmosphere. Human gas-exchange occurs in the lungs...
). This happens through the passive process of diffusion
Diffusion
Molecular diffusion, often called simply diffusion, is the thermal motion of all particles at temperatures above absolute zero. The rate of this movement is a function of temperature, viscosity of the fluid and the size of the particles...
.

Obesity, high blood pressure, and high cholesterol
Cholesterol
Cholesterol is a complex isoprenoid. Specifically, it is a waxy steroid of fat that is produced in the liver or intestines. It is used to produce hormones and cell membranes and is transported in the blood plasma of all mammals. It is an essential structural component of mammalian cell membranes...
can increase the risk of developing heart disease
Heart disease
Heart disease, cardiac disease or cardiopathy is an umbrella term for a variety of diseases affecting the heart. , it is the leading cause of death in the United States, England, Canada and Wales, accounting for 25.4% of the total deaths in the United States.-Types:-Coronary heart disease:Coronary...
. However, half the number of heart attacks occur in people with normal cholesterol levels. Heart disease is a major cause of death.

It is generally accepted that factors such as exercise, diet, and overall well-being, including both emotional and physiological components, affect heart health in humans.