Encyclopedia
The aortic valve is one of the valves
Heart valve
A heart valve normally allows blood flow in only one direction through the heart. The four valves commonly represented in a mammalian heart determine the pathway of blood flow through the heart...
of the heart
Heart
The heart is a myogenic muscular organ found in all animals with a circulatory system , that is responsible for pumping blood throughout the blood vessels by repeated, rhythmic contractions...
. It is normally tricuspid (with three leaflets), although in 1% of the population it is found to be congenitally bicuspid (two leaflets). It lies between the left ventricle
Left ventricle
The left ventricle is one of four chambers in the human heart. It receives oxygenated blood from the left atrium via the mitral valve, and pumps it into the aorta via the aortic valve.-Shape:...
and the aorta
Aorta
The aorta is the largest artery in the body, originating from the left ventricle of the heart and extending down to the abdomen, where it branches off into two smaller arteries...
.


Disease of the aortic valve 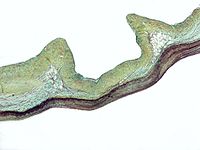 Aortic valve replacement
Aortic valve replacement
Aortic valve replacement is a cardiac surgery procedure in which a patient's failing aortic valve is replaced with an alternate healthy valve. The aortic valve can be affected by a range of diseases; the valve can either become leaky or partially blocked...
means that a patient's aortic valve is replaced by a different valve. The aortic valve can be affected by a range of diseases and require aortic valve replacement. The valve can become either leaky (regurgitant
Mitral regurgitation
Mitral regurgitation , mitral insufficiency or mitral incompetence is a disorder of the heart in which the mitral valve does not close properly when the heart pumps out blood. It is the abnormal leaking of blood from the left ventricle, through the mitral valve, and into the left atrium, when...
or insufficient) or stuck partially shut (stenotic
Stenosis
A stenosis is an abnormal narrowing in a blood vessel or other tubular organ or structure.It is also sometimes called a stricture ....
). Aortic valve replacement currently requires open heart surgery. Research is being done now to develop valves that can be implanted using a catheter
Catheter
In medicine, a catheter is a tube that can be inserted into a body cavity, duct, or vessel. Catheters thereby allow drainage, administration of fluids or gases, or access by surgical instruments. The process of inserting a catheter is catheterization...
without open heart surgery. There are two basic types of artificial heart valve, mechanical valves and tissue valves. Tissue heart valves are usually made from animal tissues, either animal heart valve tissue or animal pericardial tissue. The tissue is treated to prevent rejection and to prevent calcification.