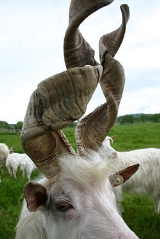 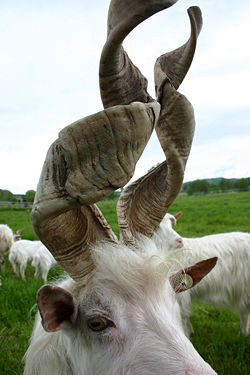 A horn is a pointed projection of the skin
Skin
-Dermis:The dermis is the layer of skin beneath the epidermis that consists of connective tissue and cushions the body from stress and strain. The dermis is tightly connected to the epidermis by a basement membrane. It also harbors many Mechanoreceptors that provide the sense of touch and heat...
on the head of various animals, consisting of a covering of horn (keratin
Keratin
Keratin refers to a family of fibrous structural proteins. Keratin is the key of structural material making up the outer layer of human skin. It is also the key structural component of hair and nails...
and other protein
Protein
Proteins are biochemical compounds consisting of one or more polypeptides typically folded into a globular or fibrous form, facilitating a biological function. A polypeptide is a single linear polymer chain of amino acids bonded together by peptide bonds between the carboxyl and amino groups of...
s) surrounding a core of living bone
Bone
Bones are rigid organs that constitute part of the endoskeleton of vertebrates. They support, and protect the various organs of the body, produce red and white blood cells and store minerals. Bone tissue is a type of dense connective tissue...
. True horns are found mainly among the ruminant
Ruminant
A ruminant is a mammal of the order Artiodactyla that digests plant-based food by initially softening it within the animal's first compartment of the stomach, principally through bacterial actions, then regurgitating the semi-digested mass, now known as cud, and chewing it again...
artiodactyls, in the families Antilocapridae (pronghorn
Pronghorn
The pronghorn is a species of artiodactyl mammal endemic to interior western and central North America. Though not an antelope, it is often known colloquially in North America as the prong buck, pronghorn antelope, or simply antelope, as it closely resembles the true antelopes of the Old World and...
) and Bovidae (cattle
Cattle
Cattle are the most common type of large domesticated ungulates. They are a prominent modern member of the subfamily Bovinae, are the most widespread species of the genus Bos, and are most commonly classified collectively as Bos primigenius...
, goat
Goat
The domestic goat is a subspecies of goat domesticated from the wild goat of southwest Asia and Eastern Europe. The goat is a member of the Bovidae family and is closely related to the sheep as both are in the goat-antelope subfamily Caprinae. There are over three hundred distinct breeds of...
s, antelope
Antelope
Antelope is a term referring to many even-toed ungulate species indigenous to various regions in Africa and Eurasia. Antelopes comprise a miscellaneous group within the family Bovidae, encompassing those old-world species that are neither cattle, sheep, buffalo, bison, nor goats...
etc.). One pair of horns is usual, but two pairs occur in a few wild species and in a few domesticated
Domestication
Domestication or taming is the process whereby a population of animals or plants, through a process of selection, becomes accustomed to human provision and control. In the Convention on Biological Diversity a domesticated species is defined as a 'species in which the evolutionary process has been...
breeds of sheep. Partial or deformed horns in livestock are called scurs.

Horns usually have a curved or spiral
Spiral
In mathematics, a spiral is a curve which emanates from a central point, getting progressively farther away as it revolves around the point.-Spiral or helix:...
shape, often with ridges or fluting. In many species only males have horns. Horns start to grow soon after birth, and continue to grow throughout the life of the animal (except in pronghorns, which shed the outer layer annually, but retain the bony core). Similar growths on other parts of the body are not usually called horns, but spur
Spur (biology)
A spur in botany is a spike, usually part of a flower.In certain plants, part of a sepal or petal develops into an elongated hollow spike extending behind the flower, containing nectar which is sucked by long-tongued animals . Plants with such structures include Delphinium, Aquilegia, Piperia, and...
s, claw
Claw
A claw is a curved, pointed appendage, found at the end of a toe or finger in most mammals, birds, and some reptiles. However, the word "claw" is also often used in reference to an invertebrate. Somewhat similar fine hooked structures are found in arthropods such as beetles and spiders, at the end...
s or hoof
Hoof
A hoof , plural hooves or hoofs , is the tip of a toe of an ungulate mammal, strengthened by a thick horny covering. The hoof consists of a hard or rubbery sole, and a hard wall formed by a thick nail rolled around the tip of the toe. The weight of the animal is normally borne by both the sole...
s, depending on the part of the body on which they occur.

The term "horn" is also popularly applied to other hard and pointed features attached to the head of animals in various other families:

Many mammal species in various families have tusk
Tusk
Tusks are elongated, continuously growing front teeth, usually but not always in pairs, that protrude well beyond the mouth of certain mammal species. They are most commonly canines, as with warthogs, wild boar, and walruses, or, in the case of elephants and narwhals, elongated incisors...
s, which often serve the same functions as horns, but are in fact oversize teeth. These include the Moschidae (Musk deer, which are ruminants), Suidae
Suidae
Suidae is the biological family to which pigs belong. In addition to numerous fossil species, up to sixteen extant species are currently recognized, classified into between four and eight genera...
(Wild Boars), Proboscidea
Proboscidea
Proboscidea is a taxonomic order containing one living family, Elephantidae, and several extinct families. This order was first described by J. Illiger in 1881 and encompasses the trunked mammals...
(Elephant
Elephant
Elephants are large land mammals in two extant genera of the family Elephantidae: Elephas and Loxodonta, with the third genus Mammuthus extinct...
s), Monodontidae
Monodontidae
The cetacean family Monodontidae comprises two unusual whale species, the narwhal, in which the male has a long tusk, and the white beluga whale...
(Narwhal
Narwhal
The narwhal, Monodon monoceros, is a medium-sized toothed whale that lives year-round in the Arctic. One of two living species of whale in the Monodontidae family, along with the beluga whale, the narwhal males are distinguished by a characteristic long, straight, helical tusk extending from their...
s) and Odobenidae
Odobenidae
Odobenidae is a family of Pinnipeds. The only living species is walrus.In the past, however, the group was much more diverse, and includes more than ten fossil genera.- Taxonomy :All genera, except Odobenus, are extinct.*Prototaria...
(Walrus
Walrus
The walrus is a large flippered marine mammal with a discontinuous circumpolar distribution in the Arctic Ocean and sub-Arctic seas of the Northern Hemisphere. The walrus is the only living species in the Odobenidae family and Odobenus genus. It is subdivided into three subspecies: the Atlantic...
es). 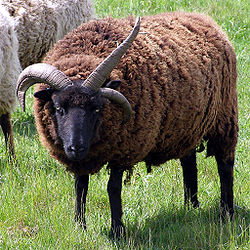 Cutaneous horn
Cutaneous horn
Cutaneous horns, also known by the Latin name cornu cutaneum, are unusual keratinous skin tumors with the appearance of horns, or sometimes of wood or coral. Formally, this is a clinical diagnosis for a "conical projection above the surface of the skin." They are usually small and localized, but...
s are the only examples of horns growing on people. They are most often benign growths and can be removed by a razor.

Cases of people growing horns have been historically described, sometimes with mythical status. Researchers have not however discovered photographic evidence of the phenomenon. There are human cadaveric specimens that show outgrowings, but these are instead classified as osteoma
Osteoma
An osteoma is a new piece of bone usually growing on another piece of bone, typically the skull. It is a benign tumor.When the bone tumor grows on other bone it is known as "homoplastic osteoma"; when it grows on other tissue it is called "heteroplastic osteoma".Osteoma represents the most common...
s or other excrescence
Excrescence
Excrescence is something that is an outgrowth of something else. Depending on the subject matter, this may or may not be something abnormal and/or disfiguring.* Excrescence is the epenthesis of a consonant....
s. Theoretically, there may be children born with horns which are corrected with early surgical intervention. The phenomenon of humans with horns has been observed in countries lacking advanced medicine. There are living people, several in China, with cases of cutaneous horns, most common in the elderly.

Animals have a variety of uses for horns and antlers, including defending themselves from predators and fighting members of their own species for territory, dominance or mating
Mating
In biology, mating is the pairing of opposite-sex or hermaphroditic organisms for copulation. In social animals, it also includes the raising of their offspring. Copulation is the union of the sex organs of two sexually reproducing animals for insemination and subsequent internal fertilization...
priority. Horns are usually present only in males but in some species, females too may possess horns. It has been theorized by researchers that taller species living in the open are more visible from longer distances and more likely to benefit from horns to defend themselves against predators. Female bovids that are not hidden from predators due to their large size or open Savannah
Savannah
Savannah or savanna is a type of grassland.It can also mean:-People:* Savannah King, a Canadian freestyle swimmer* Savannah Outen, a singer who gained popularity on You Tube...
like habitat are more likely to bear horns than small or camouflaged species.

In addition, horns may be used to root in the soil or strip bark from trees. In animal courtship
Courtship
Courtship is the period in a couple's relationship which precedes their engagement and marriage, or establishment of an agreed relationship of a more enduring kind. In courtship, a couple get to know each other and decide if there will be an engagement or other such agreement...
many use horns in displays. For example, the male blue wildebeest
Blue Wildebeest
The Blue Wildebeest , also called the Common Wildebeest, is a large antelope and one of two species of wildebeest. It grows to 115–145 cm shoulder height and attains a body mass of 168–274 kg. They range the open plains, bushveld and dry woodlands of Southern and East Africa, living for...
reams the bark and branches of trees to impress the female and lure her into his territory
Territory (animal)
In ethology the term territory refers to any sociographical area that an animal of a particular species consistently defends against conspecifics...
. Some animals with true horns use them for cooling. The blood vessels in the bony core allow the horns to function as a radiator
Radiator
Radiators are heat exchangers used to transfer thermal energy from one medium to another for the purpose of cooling and heating. The majority of radiators are constructed to function in automobiles, buildings, and electronics...
.