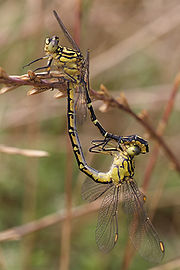 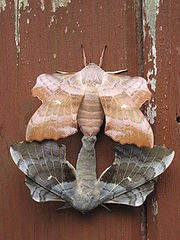 For animals, mating methods include random mating, disassortative mating, assortative mating
Assortative mating
Assortative mating , and the related concept Disassortative mating, is the phenomenon where a sexually reproducing organism chooses to mate with individuals that are similar or dissimilar to itself in some specific manner...
, or a mating pool
Mating pool
A mating pool is a concept used in evolutionary computation.Typically virtual populations are usually treated as a whole. An alternative approach is to separate only individuals who will produce offspring from the remainder of the current population. These are placed into a mating pool.Potential...
. In some birds, it includes such behaviours as nest
Nest
A nest is a place of refuge to hold an animal's eggs or provide a place to live or raise offspring. They are usually made of some organic material such as twigs, grass, and leaves; or may simply be a depression in the ground, or a hole in a tree, rock or building...
-building and feed
Nutrition
Nutrition is the provision, to cells and organisms, of the materials necessary to support life. Many common health problems can be prevented or alleviated with a healthy diet....
ing offspring. The human practice of mating domesticated
Domestication
Domestication or taming is the process whereby a population of animals or plants, through a process of selection, becomes accustomed to human provision and control. In the Convention on Biological Diversity a domesticated species is defined as a 'species in which the evolutionary process has been...
animals and of artificially inseminating
Artificial insemination
Artificial insemination, or AI, is the process by which sperm is placed into the reproductive tract of a female for the purpose of impregnating the female by using means other than sexual intercourse or natural insemination...
them is part of animal husbandry
Animal husbandry
Animal husbandry is the agricultural practice of breeding and raising livestock.- History :Animal husbandry has been practiced for thousands of years, since the first domestication of animals....
.

In some terrestrial
Terrestrial animal
Terrestrial animals are animals that live predominantly or entirely on land , as compared with aquatic animals, which live predominantly or entirely in the water , or amphibians, which rely on a combination of aquatic and terrestrial habitats...
arthropod
Arthropod
An arthropod is an invertebrate animal having an exoskeleton , a segmented body, and jointed appendages. Arthropods are members of the phylum Arthropoda , and include the insects, arachnids, crustaceans, and others...
s, including insect
Insect
Insects are a class of living creatures within the arthropods that have a chitinous exoskeleton, a three-part body , three pairs of jointed legs, compound eyes, and two antennae...
s representing basal
Basal (phylogenetics)
In phylogenetics, a basal clade is the earliest clade to branch in a larger clade; it appears at the base of a cladogram.A basal group forms an outgroup to the rest of the clade, such as in the following example:...
(primitive) phylogenetic clades, the male deposits spermatozoa
Spermatozoon
A spermatozoon is a motile sperm cell, or moving form of the haploid cell that is the male gamete. A spermatozoon joins an ovum to form a zygote...
on the substrate, sometimes stored within a special structure. Courtship
Courtship display
Courtship display is a special, sometimes ritualised, set of behaviours which some animals perform as part of courtship. Courtship behaviours can include special calls, postures, and movements, and may involve special plumage, bright colours or other ornamentation. A good example is the 'dancing'...
involves inducing the female to take up the sperm package into her genital opening without actual copulation. In groups such as dragonflies and many spider
Spider
Spiders are air-breathing arthropods that have eight legs, and chelicerae with fangs that inject venom. They are the largest order of arachnids and rank seventh in total species diversity among all other groups of organisms...
s, males extrude sperm into secondary copulatory structures removed from their genital opening, which are then used to inseminate the female (in dragonflies, it is a set of modified sternites on the second abdominal segment; in spiders, it is the male pedipalp
Pedipalp
Pedipalps , are the second pair of appendages of the prosoma in the subphylum Chelicerata. They are traditionally thought to be homologous with mandibles in Crustacea and insects, although more recent studies Pedipalps (commonly shortened to palps or palpi), are the second pair of appendages of the...
s). In advanced groups of insects, the male uses its aedeagus
Aedeagus
An aedeagus is a reproductive organ of male insects through which they secrete sperm from the testes during copulation with a female insect...
, a structure formed from the terminal segments of the abdomen, to deposit sperm directly (though sometimes in a capsule called a "spermatophore
Spermatophore
A spermatophore or sperm ampulla is a capsule or mass created by males of various animal species, containing spermatozoa and transferred in entirety to the female's ovipore during copulation...
") into the female's reproductive tract.

Other animals reproduce sexually with external fertilization, including many basal
Primitive (biology)
Primitive in the sense most relevant to phylogenetics means resembling the first living things and in particular resembling them in the simple nature of their anatomy and behaviour...
vertebrate
Vertebrate
Vertebrates are animals that are members of the subphylum Vertebrata . Vertebrates are the largest group of chordates, with currently about 58,000 species described. Vertebrates include the jawless fishes, bony fishes, sharks and rays, amphibians, reptiles, mammals, and birds...
s. Vertebrates (such as reptile
Reptile
Reptiles are members of a class of air-breathing, ectothermic vertebrates which are characterized by laying shelled eggs , and having skin covered in scales and/or scutes. They are tetrapods, either having four limbs or being descended from four-limbed ancestors...
s, some fish
Fish
Fish are a paraphyletic group of organisms that consist of all gill-bearing aquatic vertebrate animals that lack limbs with digits. Included in this definition are the living hagfish, lampreys, and cartilaginous and bony fish, as well as various extinct related groups...
, and most bird
Bird
Birds are feathered, winged, bipedal, endothermic , egg-laying, vertebrate animals. Around 10,000 living species and 188 families makes them the most speciose class of tetrapod vertebrates. They inhabit ecosystems across the globe, from the Arctic to the Antarctic. Extant birds range in size from...
s) reproduce with internal fertilization through cloaca
Cloaca
In zoological anatomy, a cloaca is the posterior opening that serves as the only such opening for the intestinal, reproductive, and urinary tracts of certain animal species...
l copulation (see also hemipenis
Hemipenis
A hemipenis is one of a pair of intromittent organs of male squamates .Hemipenes are usually held inverted, within the body, and are everted for reproduction via erectile tissue, much like that in the human penis. Only one is used at a time, and some evidence indicates males alternate use between...
), while mammal
Mammal
Mammals are members of a class of air-breathing vertebrate animals characterised by the possession of endothermy, hair, three middle ear bones, and mammary glands functional in mothers with young...
s copulate vagina
Vagina
The vagina is a fibromuscular tubular tract leading from the uterus to the exterior of the body in female placental mammals and marsupials, or to the cloaca in female birds, monotremes, and some reptiles. Female insects and other invertebrates also have a vagina, which is the terminal part of the...
lly.

For some animals, copulation may or may not be related to reproduction; for example chimpanzee
Chimpanzee
Chimpanzee, sometimes colloquially chimp, is the common name for the two extant species of ape in the genus Pan. The Congo River forms the boundary between the native habitat of the two species:...
s and especially bonobos are known to copulate when the female is not fertile, presumably for pleasure, which in turn strengthens social bonds. See also sexual intercourse
Sexual intercourse
Sexual intercourse, also known as copulation or coitus, commonly refers to the act in which a male's penis enters a female's vagina for the purposes of sexual pleasure or reproduction. The entities may be of opposite sexes, or they may be hermaphroditic, as is the case with snails...
and human sexual behavior
Human sexual behavior
Human sexual activities or human sexual practices or human sexual behavior refers to the manner in which humans experience and express their sexuality. People engage in a variety of sexual acts from time to time, and for a wide variety of reasons...
.


In plants and fungi

Like in animals, mating in other Eukaryotes, such as plant
Plant
Plants are living organisms belonging to the kingdom Plantae. Precise definitions of the kingdom vary, but as the term is used here, plants include familiar organisms such as trees, flowers, herbs, bushes, grasses, vines, ferns, mosses, and green algae. The group is also called green plants or...
s and fungi
Fungus
A fungus is a member of a large group of eukaryotic organisms that includes microorganisms such as yeasts and molds , as well as the more familiar mushrooms. These organisms are classified as a kingdom, Fungi, which is separate from plants, animals, and bacteria...
, denotes sexual conjugation. However, in vascular plants this is mostly achieved without physical contact between mating individuals (see pollination
Pollination
Pollination is the process by which pollen is transferred in plants, thereby enabling fertilisation and sexual reproduction. Pollen grains transport the male gametes to where the female gamete are contained within the carpel; in gymnosperms the pollen is directly applied to the ovule itself...
), and in some cases, e.g., in fungi no distinguishable male or female organs exist (see isogamy
Isogamy
Isogamy is a form of sexual reproduction that involves gametes of similar morphology , differing only in allele expression in one or more mating-type regions...
); however, mating type
Mating type
Mating types occur in eukaryotes that undergo sexual reproduction via isogamy. Since the gametes of different mating types look alike, they are often referred to by numbers, letters, or simply "+" and "-" instead of "male" and "female." Mating can only take place between different mating...
s in some fungal species are somewhat analogous to sexual dimorphism
Sexual dimorphism
Sexual dimorphism is a phenotypic difference between males and females of the same species. Examples of such differences include differences in morphology, ornamentation, and behavior.-Examples:-Ornamentation / coloration:...
in animals, and determine whether or not two individual isolates can mate.