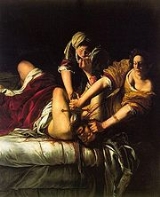 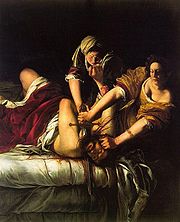 In the deuterocanonical
Deuterocanonical books
Deuterocanonical books is a term used since the sixteenth century in the Catholic Church and Eastern Christianity to describe certain books and passages of the Christian Old Testament that are not part of the Hebrew Bible. The term is used in contrast to the protocanonical books, which are...
Book of Judith Holofernes (Hebrew
Hebrew language
Hebrew is a Semitic language of the Afroasiatic language family. Culturally, is it considered by Jews and other religious groups as the language of the Jewish people, though other Jewish languages had originated among diaspora Jews, and the Hebrew language is also used by non-Jewish groups, such...
, הולופרנס) was an invading general of Nebuchadnezzar
Nebuchadnezzar
Nebuchadnezzar was the name of several kings of Babylonia.* Nebuchadnezzar I, who ruled the Babylonian Empire in the 12th century BC* Nebuchadnezzar II , the Babylonian ruler mentioned in the biblical Book of Daniel...
. Nebuchadnezzar dispatched Holofernes to take vengeance on the nations of the west that had withheld their assistance to his reign. Holofernes occupied all the nations along the sea coast and destroyed all the gods of the nations, so that all nations would worship Nebuchadnezzar alone.
Holofernes was warned by Achior, the leader of the children of Ammon
Ammon
Ammon , also referred to as the Ammonites and children of Ammon, was an ancient nation located east of the Jordan River, Gilead, and the Dead Sea, in present-day Jordan. The chief city of the country was Rabbah or Rabbath Ammon, site of the modern city of Amman, Jordan's capital...
, against attacking the Jewish people. Holofernes and his followers were angered by Achior. They rebuked him, insisting that there was no god other than Nebuchadnezzar.

The general laid siege to Bethulia
Bethulia
Bethulia Bethulia Bethulia (Hebrew: בתוליה; in Greek Betuloua, is a Biblical city whose deliverance by Judith, when besieged by Holofernes, forms the subject of the Book of Judith....
, commonly believed to be Meselieh, and the city almost surrendered. Holofernes' advance stopped the water supply to Bethulia. The people lost heart and encouraged Ozias and their rulers to give way. The leaders vowed to surrender if no help arrived within five days.

Bethulia was saved by Judith, a beautiful Hebrew widow who entered Holofernes's camp and seduced him. Judith then beheaded Holofernes while he was drunk. She returned to Bethulia with the severed head, and the Hebrews defeated the enemy. Hebrew versions of the tale in the Megillat Antiochus
Megillat Antiochus
Megillat Antiochus is a work recounting the story of Hanukkah and the history of the victory of the Maccabees over the Seleucid Empire....
and the Chronicles of Jerahmeel
Chronicles of Jerahmeel
The Chronicles of Jerahmeel is a voluminous work that draws largely on Pseudo-Philo's earlier history of Biblical events and is of special interest because it includes Hebrew and Aramaic versions of certain deuterocanonical books in the Septuagint....
identify "Holoferenes" as Nicanor whence the name "Holofernes" in the Greek version would be a deliberately cryptic name similar to the use of "Nebuchadnezzar" for Antiochus
Antiochus IV Epiphanes
Antiochus IV Epiphanes ruled the Seleucid Empire from 175 BC until his death in 164 BC. He was a son of King Antiochus III the Great. His original name was Mithridates; he assumed the name Antiochus after he ascended the throne....
.

Holofernes is depicted in Geoffrey Chaucer
Geoffrey Chaucer
Geoffrey Chaucer , known as the Father of English literature, is widely considered the greatest English poet of the Middle Ages and was the first poet to have been buried in Poet's Corner of Westminster Abbey...
's The Monk's Tale in The Canterbury Tales
The Canterbury Tales
The Canterbury Tales is a collection of stories written in Middle English by Geoffrey Chaucer at the end of the 14th century. The tales are told as part of a story-telling contest by a group of pilgrims as they travel together on a journey from Southwark to the shrine of Saint Thomas Becket at...
, and in Dante
DANTE
Delivery of Advanced Network Technology to Europe is a not-for-profit organisation that plans, builds and operates the international networks that interconnect the various national research and education networks in Europe and surrounding regions...
's Purgatorio (where Holofernes is to be found on the Terrace of Pride as an example of 'pride cast down'). As a painter's subject it offers the chance to contrast the flesh and jewels of a beautiful, festively attired woman with the grisly victim, a Hebrew Bible
Hebrew Bible
The Hebrew Bible is a term used by biblical scholars outside of Judaism to refer to the Tanakh , a canonical collection of Jewish texts, and the common textual antecedent of the several canonical editions of the Christian Old Testament...
parallel to the New Testament
New Testament
The New Testament is the second major division of the Christian biblical canon, the first such division being the much longer Old Testament....
vignette of Salome
Salome
Salome , the Daughter of Herodias , is known from the New Testament...
with the head of John the Baptist
John the Baptist
John the Baptist was an itinerant preacher and a major religious figure mentioned in the Canonical gospels. He is described in the Gospel of Luke as a relative of Jesus, who led a movement of baptism at the Jordan River...
.
The source of this article is wikipedia, the free encyclopedia.  The text of this article is licensed under the GFDL.