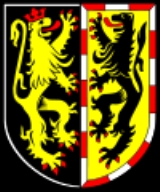 Encyclopedia
Hof is a district in Bavaria
Bavaria
Bavaria, formally the Free State of Bavaria is a state of Germany, located in the southeast of Germany. With an area of , it is the largest state by area, forming almost 20% of the total land area of Germany...
, Germany
Germany
Germany , officially the Federal Republic of Germany , is a federal parliamentary republic in Europe. The country consists of 16 states while the capital and largest city is Berlin. Germany covers an area of 357,021 km2 and has a largely temperate seasonal climate...
. It is bounded by (from the south and clockwise) the districts of Wunsiedel
Wunsiedel (district)
Wunsiedel is a Kreis in the northeastern part of Bavaria, Germany. Neighbouring districts are Tirschenreuth, Bayreuth, Hof, and to the west the Czech Karlovy Vary Region.-Geography:...
, Bayreuth
Bayreuth (district)
Bayreuth is a district in Bavaria, Germany. It surrounds, but does not include the city of Bayreuth. The district is bounded by the districts of Kulmbach, Hof, Wunsiedel, Tirschenreuth, Neustadt/Waldnaab, Amberg-Sulzbach, Nürnberger Land, Forchheim and Bamberg.-History:The district was established...
, Kulmbach
Kulmbach (district)
Kulmbach is a district in Bavaria, Germany. It is bounded by the districts of Kronach, Hof, Bayreuth and Lichtenfels.-History:...
and Kronach
Kronach (district)
Kronach is a district in Bavaria, Germany. It is bounded by the districts of Hof, Kulmbach, Lichtenfels and Coburg, and the state of Thuringia .-History:...
, the states of Thuringia
Thuringia
The Free State of Thuringia is a state of Germany, located in the central part of the country.It has an area of and 2.29 million inhabitants, making it the sixth smallest by area and the fifth smallest by population of Germany's sixteen states....
(district of Saale-Orla) and Saxony (district of Vogtlandkreis
Vogtlandkreis
The Vogtlandkreis is a Landkreis in the southwest of the Free State of Saxony, Germany, at the borders to Thuringia, Bavaria, and the Czech Republic. Neighboring districts are Hof, Saale-Orla, Greiz, Zwickau and Erzgebirgskreis...
), and the Czech Republic
Czech Republic
The Czech Republic is a landlocked country in Central Europe. The country is bordered by Poland to the northeast, Slovakia to the east, Austria to the south, and Germany to the west and northwest....
. The city of Hof
Hof, Germany
Hof is a city located on the banks of the Saale in the northeastern corner of the German state of Bavaria, in the Franconia region, at the Czech border and the forested Fichtelgebirge and Frankenwald upland regions....
is an enclave within the district, as well a being the district's administrative seat.

Following a short regency by Kingdom of Prussia
Kingdom of Prussia
The Kingdom of Prussia was a German kingdom from 1701 to 1918. Until the defeat of Germany in World War I, it comprised almost two-thirds of the area of the German Empire...
(1791–1810) the region fell to Bavaria in 1810. The district was established in 1852. In the Bavarian communal reforms of 1972 it was merged with parts of the dissolved districts Naila, Münchberg, Kronach and Rehau.

The Saxon Saale
Saale
The Saale, also known as the Saxon Saale and Thuringian Saale , is a river in Germany and a left-bank tributary of the Elbe. It is not to be confused with the smaller Franconian Saale, a right-bank tributary of the Main, or the Saale in Lower Saxony, a tributary of the Leine.-Course:The Saale...
river originates in the south of the district, on the slopes of the Fichtelgebirge
Fichtelgebirge
The Fichtelgebirge is a mountain range in northeastern Bavaria, Germany. It extends from the valley of the Red Main River to the Czech border, a few foothills spilling over into the Czech Republic. It continues in a northeastern direction as the Ore Mountains, and in a southeastern direction as...
. From here it runs northwards, its valley separating the Fichtelgebirge in the east and the lower Frankenwald
Frankenwald
thumb|View to DöbrabergThe Franconian Forest is a mid-altitude mountain range in Northern Bavaria, Germany. It is located in the district of Upper Franconia and forms the geological connection between the Fichtelgebirge and the Thuringian Forest...
hills in the west.