Encyclopedia
Hiiumaa is the second largest island
Island
An island or isle is any piece of sub-continental land that is surrounded by water. Very small islands such as emergent land features on atolls can be called islets, cays or keys. An island in a river or lake may be called an eyot , or holm...
(989 km²) belonging to Estonia
Estonia
Estonia , officially the Republic of Estonia , is a state in the Baltic region of Northern Europe. It is bordered to the north by the Gulf of Finland, to the west by the Baltic Sea, to the south by Latvia , and to the east by Lake Peipsi and the Russian Federation . Across the Baltic Sea lies...
. It is located in the Baltic Sea
Baltic Sea
The Baltic Sea is a brackish mediterranean sea located in Northern Europe, from 53°N to 66°N latitude and from 20°E to 26°E longitude. It is bounded by the Scandinavian Peninsula, the mainland of Europe, and the Danish islands. It drains into the Kattegat by way of the Øresund, the Great Belt and...
, north of the island of Saaremaa
Saaremaa
Saaremaa is the largest island in Estonia, measuring 2,673 km². The main island of Saare County, it is located in the Baltic Sea, south of Hiiumaa island, and belongs to the West Estonian Archipelago...
, a part of the West Estonian archipelago. Its largest town is Kärdla
Kärdla
Kärdla is the largest town on the Estonian island of Hiiumaa and the capital of Hiiu County.-Geography:Kärdla is located on the north-eastern coast of Hiiumaa, by the Gulf of Tareste . Southeast of the town is the Kärdla meteorite crater, which is 455 million years old.Several small rivers flow...
.

Hiiumaa is the main island of Hiiu County, called Hiiumaa or Hiiu maakond in Estonian
Estonian language
Estonian is the official language of Estonia, spoken by about 1.1 million people in Estonia and tens of thousands in various émigré communities...
. The Swedish
Swedish language
Swedish is a North Germanic language, spoken by approximately 10 million people, predominantly in Sweden and parts of Finland, especially along its coast and on the Åland islands. It is largely mutually intelligible with Norwegian and Danish...
and German
German language
German is a West Germanic language, related to and classified alongside English and Dutch. With an estimated 90 – 98 million native speakers, German is one of the world's major languages and is the most widely-spoken first language in the European Union....
name of the island is Dagö (day island), Dagø in Danish
Danish language
Danish is a North Germanic language spoken by around six million people, principally in the country of Denmark. It is also spoken by 50,000 Germans of Danish ethnicity in the northern parts of Schleswig-Holstein, Germany, where it holds the status of minority language...
— a calque
Calque
In linguistics, a calque or loan translation is a word or phrase borrowed from another language by literal, word-for-word or root-for-root translation.-Calque:...
of its old Finnish name Päivänsalo (day island); compare Ösel (Yösalo – night island) for Saaremaa
Saaremaa
Saaremaa is the largest island in Estonia, measuring 2,673 km². The main island of Saare County, it is located in the Baltic Sea, south of Hiiumaa island, and belongs to the West Estonian Archipelago...
. In modern Finnish
Finnish language
Finnish is the language spoken by the majority of the population in Finland Primarily for use by restaurant menus and by ethnic Finns outside Finland. It is one of the two official languages of Finland and an official minority language in Sweden. In Sweden, both standard Finnish and Meänkieli, a...
it is called Hiidenmaa, literally hiisi
Hiisi
Hiisis are a kind of tutelary spirits in mythologies of the Baltic Sea area, especially in Finland. In Christian tradition, they are most often considered to be malicious or at least very horrifying...
's land. In Old Gutnish
Old Gutnish
Old Gutnish was the dialect of Old Norse that was spoken on the Baltic island of Gotland. It shows sufficient differences from the Old East Norse dialect that it is considered to be a separate branch...
it was Dagaiþ (day isthmus), from which the local North Germanic name "Daë" is derived. 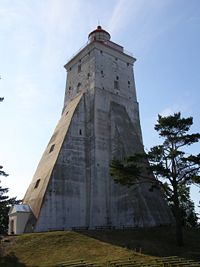 Archaeological evidence of the first human settlement in Hiiumaa dates to as early as the 4th century BC. The first documented record of the island of Dageida was made by contemporary chroniclers in 1228, at the time when Hiiumaa, along with the rest of Estonia, had been conquered by Germanic crusaders
Livonian Crusade
The Livonian Crusade refers to the German and Danish conquest and colonization of medieval Livonia, the territory constituting modern Latvia and Estonia, during the Northern Crusades...
. In 1254, Hiiumaa was divided between the Bishopric of Ösel-Wiek
Bishopric of Ösel-Wiek
The Bishopric of Ösel–Wiek was a semi-independent Roman Catholic prince-bishopric in what is now Saare, Hiiu and Lääne counties of Estonia.The bishopric was created as a state of Holy Roman Empire on 1 October 1228, by Henry, King of the Romans...
and the Livonian branch
Livonian Order
The Livonian Order was an autonomous Livonian branch of the Teutonic Order and a member of the Livonian Confederation from 1435–1561. After being defeated by Samogitians in the 1236 Battle of Schaulen , the remnants of the Livonian Brothers of the Sword were incorporated into the Teutonic Knights...
of the Teutonic Order, who were also partly acting on behalf of the Hanseatic League
Hanseatic League
The Hanseatic League was an economic alliance of trading cities and their merchant guilds that dominated trade along the coast of Northern Europe...
.

The island was part of Swedish Estonia
Swedish Estonia
The Duchy of Estonia , also known as Swedish Estonia, was a dominion of the Swedish Empire from 1561 until 1721, when it was ceded to Russia in the Treaty of Nystad, following its capitulation in the Great Northern War. The dominion arose when the northern parts of present-day Estonia were united...
from 1563–1720, after which it passed to the Russian Empire
Russian Empire
The Russian Empire was a state that existed from 1721 until the Russian Revolution of 1917. It was the successor to the Tsardom of Russia and the predecessor of the Soviet Union...
as part of the Governorate of Estonia
Governorate of Estonia
The Governorate of Estonia or Estland, also known as the Government of Estonia or Province of Estonia, was a governorate of the Russian Empire in what is now northern Estonia.-Historical overview:...
, although Dagö's Swedish population kept most of their privileges. Most of the island's previously numerous Swedish-speaking population emigrated
Gammalsvenskby
Verbivka is now part of the village of Zmiyivka in Beryslav Raion of Kherson Oblast, Ukraine which has a Swedish cultural heritage...
or were "Estonianised" during the period of Imperial Russian rule, although a small minority remains to this day. Estonian Swedes
Estonian Swedes
The Estonian Swedes, Estonia-Swedes, or Coastal Swedes are a Swedish-speaking linguistic minority traditionally residing in the coastal areas and islands of what is now western and northern Estonia...
are also known as "aibofolke" (meaning island people in Swedish) or "rannarootslased" (meaning coastal Swedes in Estonian).

Hiiumaa was occupied during World War I
World War I
World War I , which was predominantly called the World War or the Great War from its occurrence until 1939, and the First World War or World War I thereafter, was a major war centred in Europe that began on 28 July 1914 and lasted until 11 November 1918...
by the Imperial German Army
German Army (German Empire)
The German Army was the name given the combined land forces of the German Empire, also known as the National Army , Imperial Army or Imperial German Army. The term "Deutsches Heer" is also used for the modern German Army, the land component of the German Bundeswehr...
, in Operation Albion
Operation Albion
Operation Albion was the German land and naval operation in September-October 1917 to invade and occupy the Estonian islands of Saaremaa , Hiiumaa and Muhu , then part of the Russian Republic...
. After the war, it became a part of independent Estonia. It was annexed by the Soviet Union
Soviet Union
The Soviet Union , officially the Union of Soviet Socialist Republics , was a constitutionally socialist state that existed in Eurasia between 1922 and 1991....
in 1940, by Nazi Germany
Occupation of Estonia by Nazi Germany
After Nazi Germany invaded the Soviet Union on June 22, 1941, Army Group North reached Estonia in July.Initially the Germans were perceived by most Estonians as liberators from the USSR and its repressions, having arrived only a week after the first mass deportations from the Baltics...
in 1941, and by the Soviets again in 1944. It was then a part of the Estonian Soviet Socialist Republic
Estonian Soviet Socialist Republic
The Estonian Soviet Socialist Republic , often abbreviated as Estonian SSR or ESSR, was a republic of the Soviet Union, administered by and subordinated to the Government of the Soviet Union...
until the Soviet Union's collapse in 1991. During the Soviet era Hiiumaa was declared a restricted zone, closed to foreigners and to most mainland Estonians. Since 1991, the island has been a part of independent Estonia.

Some maritime activities did happen near the waters of Hiiumaa. The Soviet destroyer Gnevny was sunk 23rd June, 1941 after having hit with the German seamine. Two German motor torpedo boats, S43 and S106, were destroyed because of the Soviet seamines, 27th June, 1941. To the north of Hiiumaa, on 1st July, 1941, the Soviet submarine M-81 was destroyed because of a German seamine. On the Hiiumaa waters itself again on 25th June, the Soviet minesweeper T-208 Shkiv was hit with a German seamine and was destroyed. The same happened to the Soviet minesweepers T-216, on 7th July, 1941 and T-201 Zarjad, on 30th July, 1941. Also the Soviet submarine, SC-307, fired a torpedo at the German submarine U-144, which sank, 10th August, 1941.

Road transport from Estonian mainland to Hiiumaa involves a 90-minute (28 km) ferry crossing from Rohuküla
Rohuküla
Rohuküla is a village in Ridala Parish, Lääne County, in western Estonia....
to Heltermaa
Heltermaa
Heltermaa is a village in Pühalepa Parish, Hiiu County in northwestern Estonia....
, which is 25 km by road from Kärdla. There are about 10 ferry departures a day. In the summer weekends, getting car space on the ferry usually requires advance booking. There are about 2 scheduled buses a day between Tallinn
Tallinn
Tallinn is the capital and largest city of Estonia. It occupies an area of with a population of 414,940. It is situated on the northern coast of the country, on the banks of the Gulf of Finland, south of Helsinki, east of Stockholm and west of Saint Petersburg. Tallinn's Old Town is in the list...
(the capital of Estonia) and Kärdla.
In the winter, the island can be reached, conditions permitting, via a 26.5 km ice road
Ice road
Ice roads are frozen, human-made structures on the surface of bays, rivers, lakes, or seas in the far north. They link dry land, frozen waterways, portages and winter roads, and are usually remade each winter. Ice roads allow temporary transport to areas with no permanent road access...
(the longest in Europe
Europe
Europe is, by convention, one of the world's seven continents. Comprising the westernmost peninsula of Eurasia, Europe is generally 'divided' from Asia to its east by the watershed divides of the Ural and Caucasus Mountains, the Ural River, the Caspian and Black Seas, and the waterways connecting...
) across the frozen Baltic Sea.