A heart valve normally allows blood
Blood
Blood is a specialized bodily fluid in animals that delivers necessary substances such as nutrients and oxygen to the cells and transports metabolic waste products away from those same cells....
flow in only one direction through the heart
Heart
The heart is a myogenic muscular organ found in all animals with a circulatory system , that is responsible for pumping blood throughout the blood vessels by repeated, rhythmic contractions...
. The four valves commonly represented in a mammalian heart determine the pathway of blood flow through the heart. A heart valve opens or closes incumbent upon differential pressure on each side.

The four valves in the heart are:

A form of heart disease occurs when a valve malfunctions and allows some blood to flow in the wrong direction. This is called regurgitation. 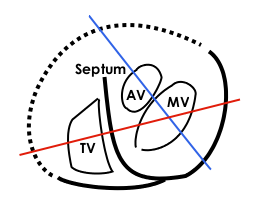 These are small valves that prevent backflow from the ventricles into the atrium
Atrium (anatomy)
In anatomy, the atrium , sometimes called auricle , refers to a chamber or space. For example, the term is used for a portion of the lateral ventricle in the brain and the blood collection chamber of the heart...
during systole
Systole (medicine)
Systole is the contraction of the heart. Used alone, it usually means the contraction of the left ventricle.In all mammals, the heart has 4 chambers. The left and right ventricles pump together. The atria and ventricles pump in sequence...
. They are anchored to the wall of the ventricle by chordae tendineae
Chordae tendineae
The chordae tendineae, or heart strings, are cord-like tendons that connect the papillary muscles to the tricuspid valve and the mitral valve in the heart....
, which prevent the valve from inverting.

The closure of the AV valves is heard as the first heart sound (S1).

Also known as the "bicuspid valve" because it contains two flaps, the mitral valve gets its name from the resemblance to a bishop
Bishop
A bishop is an ordained or consecrated member of the Christian clergy who is generally entrusted with a position of authority and oversight. Within the Catholic Church, Eastern Orthodox, Oriental Orthodox Churches, in the Assyrian Church of the East, in the Independent Catholic Churches, and in the...
's mitre
Mitre
The mitre , also spelled miter, is a type of headwear now known as the traditional, ceremonial head-dress of bishops and certain abbots in the Roman Catholic Church, as well as in the Anglican Communion, some Lutheran churches, and also bishops and certain other clergy in the Eastern Orthodox...
(a type of hat). It allows the blood to flow from the left atrium
Left atrium
The left atrium is one of the four chambers in the human heart. It receives oxygenated blood from the pulmonary veins, and pumps it into the left ventricle, via the mitral valve.-Foramen ovale:...
into the left ventricle
Left ventricle
The left ventricle is one of four chambers in the human heart. It receives oxygenated blood from the left atrium via the mitral valve, and pumps it into the aorta via the aortic valve.-Shape:...
. It is on the left side of the heart and has two cusps.

A common complication of rheumatic fever
Rheumatic fever
Rheumatic fever is an inflammatory disease that occurs following a Streptococcus pyogenes infection, such as strep throat or scarlet fever. Believed to be caused by antibody cross-reactivity that can involve the heart, joints, skin, and brain, the illness typically develops two to three weeks after...
is thickening and stenosis
Stenosis
A stenosis is an abnormal narrowing in a blood vessel or other tubular organ or structure.It is also sometimes called a stricture ....
of the mitral valve. 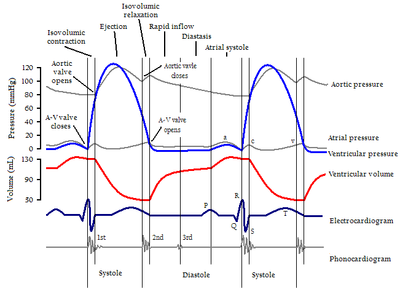 These are located at the base of both the pulmonary trunk (pulmonary artery) and the aorta, the two arteries taking blood out of the ventricles. These valves permit blood to be forced into the arteries, but prevent backflow of blood from the arteries into the ventricles. These valves do not have chordae tendineae, and are more similar to valves in veins than atrioventricular valves.

In general, motion of the heart valves is determined using the Navier-Stokes equation; using boundary conditions of the blood pressures, pericardial fluid, and external loading as the constraints.

Motion of the heart valves is used as a boundary condition in the Navier-Stokes equation in determining the fluid dynamics of blood ejection from the left and right ventricles into the aorta and the lung.


Relationship between pressure and flow in open valves

, across an open heart valve relates to the flow rate, Q, through the valve:


Valves with a single degree of freedom

Equations for the aortic valve in this case:

(t)=single degree of freedom; when