Encyclopedia
Havana Harbor is the port of Havana
Havana
Havana is the capital city, province, major port, and leading commercial centre of Cuba. The city proper has a population of 2.1 million inhabitants, and it spans a total of — making it the largest city in the Caribbean region, and the most populous...
, the capital of Cuba
Cuba
The Republic of Cuba is an island nation in the Caribbean. The nation of Cuba consists of the main island of Cuba, the Isla de la Juventud, and several archipelagos. Havana is the largest city in Cuba and the country's capital. Santiago de Cuba is the second largest city...
, and it is the main port in Cuba (not including Guantanamo Bay Naval Base
Guantanamo Bay Naval Base
Guantanamo Bay Naval Base is located on of land and water at Guantánamo Bay, Cuba which the United States leased for use as a coaling station following the Cuban-American Treaty of 1903. The base is located on the shore of Guantánamo Bay at the southeastern end of Cuba. It is the oldest overseas...
, a territory on lease by the United States
United States
The United States of America is a federal constitutional republic comprising fifty states and a federal district...
). Most vessels coming to the island make port in Havana. Other port cities in Cuba include Cienfuegos
Cienfuegos
Cienfuegos is a city on the southern coast of Cuba, capital of Cienfuegos Province. It is located about from Havana, and has a population of 150,000. The city is dubbed La Perla del Sur...
, Matanzas
Matanzas
Matanzas is the capital of the Cuban province of Matanzas. It is famed for its poets, culture, and Afro-Cuban folklore.It is located on the northern shore of the island of Cuba, on the Bay of Matanzas , east of the capital Havana and west of the resort town of Varadero.Matanzas is called the...
, Manzanillo
Manzanillo, Cuba
Manzanillo is a municipality and city in the Granma Province of Cuba.It is a port city in the Granma Province in eastern Cuba on the Gulf of Guacanayabo, near the delta of the Cauto River...
and Santiago de Cuba
Santiago de Cuba
Santiago de Cuba is the second largest city of Cuba and capital city of Santiago de Cuba Province in the south-eastern area of the island, some south-east of the Cuban capital of Havana....
.

The harbour was created from the natural Havana Bay which is entered through a narrow inlet and which divides into three main harbors: Marimelena, Guanabacoa, and Atarés.

The Battle of Havana was a two-month siege of the harbor defenses by the British in 1762.

The sinking of the U.S. battleship Maine
USS Maine (ACR-1)
USS Maine was the United States Navy's second commissioned pre-dreadnought battleship, although she was originally classified as an armored cruiser. She is best known for her catastrophic loss in Havana harbor. Maine had been sent to Havana, Cuba to protect U.S. interests during the Cuban revolt...
in Havana Harbor in 1898 was the immediate cause of the Spanish-American War
Spanish-American War
The Spanish–American War was a conflict in 1898 between Spain and the United States, effectively the result of American intervention in the ongoing Cuban War of Independence...
. 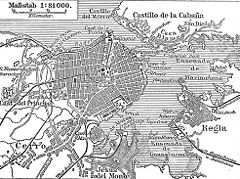 In January 1898 the USS Maine
USS Maine (ACR-1)
USS Maine was the United States Navy's second commissioned pre-dreadnought battleship, although she was originally classified as an armored cruiser. She is best known for her catastrophic loss in Havana harbor. Maine had been sent to Havana, Cuba to protect U.S. interests during the Cuban revolt...
, the largest vessel to come out of an American shipyard, was dispatched to Cuba to protect US interests there. At the time more than 8,000 US citizens resided in the country, and their safety could not be assured in the state of affairs at that time. On February 15, 1898 the Maine exploded and sank in the harbor . It became a major rallying call for the Spanish-American War
Spanish-American War
The Spanish–American War was a conflict in 1898 between Spain and the United States, effectively the result of American intervention in the ongoing Cuban War of Independence...
, and it caused the US to finally intercede on Cuba's behalf. In 1910 the wreck was removed from the harbor as it was posing a hazard to navigation. It was sunk in deep water in the Gulf of Mexico
Gulf of Mexico
The Gulf of Mexico is a partially landlocked ocean basin largely surrounded by the North American continent and the island of Cuba. It is bounded on the northeast, north and northwest by the Gulf Coast of the United States, on the southwest and south by Mexico, and on the southeast by Cuba. In...
with proper military ceremonies.

On March 4, 1960, the harbor was the scene of a deadly explosion when the French freighter La Coubre
La Coubre explosion
The freighter La Coubre exploded at 3:10 p.m. on 4 March 1960, while it was being unloaded in Havana harbor, Cuba. This 4,310-ton French vessel was carrying 76 tons of Belgian munitions from the port of Antwerp. Unloading explosive ordnance directly onto the dock was against port regulations...
, carrying 76 tons of Belgian munitions, was being unloaded. The cause of the blast, which killed an estimated 100 people, is often attributed to the CIA who wished to overthrow the new government of Fidel Castro
Fidel Castro
Fidel Alejandro Castro Ruz is a Cuban revolutionary and politician, having held the position of Prime Minister of Cuba from 1959 to 1976, and then President from 1976 to 2008. He also served as the First Secretary of the Communist Party of Cuba from the party's foundation in 1961 until 2011...
.

The town or Regla on Ensenada de Marimelena is a commercial and industrial suburb with the Galainela shipyard, ENA drydock, until recently operated as a joint venture with Curacao CDM, and the Navy's shipyard at Casablanca. Other docks include the Havana Container Terminal (TCH), the Ñico Lopez oil refinery, formerly a Shell refinery; and flour and wheat mills and aviation fuel depots.

As a harbor almost completely surrounded by shipping and industrial activities, the waters of the bay suffer from environmental stress. This in turn affects the water quality of the Caribbean Sea
Caribbean Sea
The Caribbean Sea is a sea of the Atlantic Ocean located in the tropics of the Western hemisphere. It is bounded by Mexico and Central America to the west and southwest, to the north by the Greater Antilles, and to the east by the Lesser Antilles....
into which it flows. Water entering the bay as river flows or effluent from industrial processes has a residence in the harbor of 8 days, on average. It receives approximately 48,000 m3 of waste water per day, which carries about 4,800 kg of nitrogen and 1,200 kg of phosphorus, which results in elevated concentrations of nutrients. Havana Bay is strongly affected by sewage dumping, and it also receives suspended solids, hydrocarbons, heavy metals and pollutants from agriculture, industry and port activities. The leading sources of pollution in the bay have been identified as the Luyano River which contains organic material, nutrients, sewage, solid waste, the Regla oil refinery, fish hatcheries, and port activities. The high concentration of hydrocarbons, heavy metals and other pollutants is of concern as the harbor is an important fishing port.
The source of this article is wikipedia, the free encyclopedia.  The text of this article is licensed under the GFDL.