The Castillo de la Real Fuerza (Castle of the Royal Force) is a fortress on the western side of the harbour in Havana
Havana
Havana is the capital city, province, major port, and leading commercial centre of Cuba. The city proper has a population of 2.1 million inhabitants, and it spans a total of — making it the largest city in the Caribbean region, and the most populous...
, Cuba
Cuba
The Republic of Cuba is an island nation in the Caribbean. The nation of Cuba consists of the main island of Cuba, the Isla de la Juventud, and several archipelagos. Havana is the largest city in Cuba and the country's capital. Santiago de Cuba is the second largest city...
, set back from the entrance, and bordering the Plaza de Armas. Originally built to defend against attack by pirates, it suffered from a poor strategic position too far inside the bay. The fortress is considered to be the oldest stone fortress in the Americas, and was listed in 1982 as part of the UNESCO World Heritage site of "Old Havana and its Fortifications
Old Havana
Old Havana contains the core of the original city of Havana. The positions of the original Havana city walls are the modern boundaries of Old Havana....
".

A previous fortress, the Fuerza Vieja (Old Force), was badly damaged in 1555 during an attack on Havana by the French privateer Jacques de Sores
Jacques de Sores
Jacques de Sores was a French pirate who attacked and burnt Havana, Cuba in 1555.Other than his attack on Havana, little is known of de Sores. He was nicknamed "The Exterminating Angel"...
and eventually was demolished in 1582. In 1558 Bartolomé Sánchez, an engineer appointed by King Philip II of Spain
Philip II of Spain
Philip II was King of Spain, Portugal, Naples, Sicily, and, while married to Mary I, King of England and Ireland. He was lord of the Seventeen Provinces from 1556 until 1581, holding various titles for the individual territories such as duke or count....
, began work on the new fortress, initially known as the Fuerza Nueva (New Force). The Fuerza Vieja was set back from the harbour, but the new fortress was planned to be closer to the harbour to give it a better strategic position. The ironworks were established in 1558, but the first stones were not laid until 1562. Construction was delayed due to complaints from local residents forced to relocate to make way for the building and from disagreements between Sánchez and the Governor of Havana. The fortress was not completed until 1577, with slaves and French prisoners providing most of the labour. Built of limestone quarried from the Havana shoreline, the fortification incorporated thick sloping walls, a moat and drawbridge. The governor, Francisco Carreño, ordered the addition an upper storey as barracks and a munitions store, but on completion, the fortress proved to be too small for practical use. 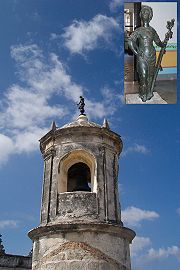 Despite being positioned closer to the harbour than the Fuerza Vieja, it quickly became apparent that the new fortress was still too distant from the mouth of the harbour to serve effectively as a defensive bulwark, so was instead adopted by Juan de Tejeda as the residence of the Governor of Havana. Subsequent governors made changes to the building, and in 1634, Juan Vitrián de Viamonte added a watchtower with a weathervane sculpted in the form of a woman, by Gerónimo Martín Pinzón, an artist from Havana, and based on the figure crowning La Giralda
Giralda
thumb|right|The Giralda at its various stages of construction: Almohad , Medieval Christian , and Renaissance .The Giralda is a former minaret that was converted to a bell tower for the Cathedral of Seville in Seville...
in Seville
Seville
Seville is the artistic, historic, cultural, and financial capital of southern Spain. It is the capital of the autonomous community of Andalusia and of the province of Seville. It is situated on the plain of the River Guadalquivir, with an average elevation of above sea level...
. Although the reason for the choice of this figure, called La Giraldilla, is not known, a common suggestion is to honour Inés de Bobadilla
Inés de Bobadilla
Inés de Bobadilla sometimes Isabel de Bobadilla was the daughter of Pedro Arias Dávila and Isabel de Bobadilla, she married, in 1537, Hernando de Soto who was then named governor of Cuba and Adelantado de Florida. Her husband leaving Cuba for his expedition in Florida, from 1539 to 1543, she...
, Havana's only female governor, who assumed control from her husband Hernando de Soto
Hernando de Soto (explorer)
Hernando de Soto was a Spanish explorer and conquistador who, while leading the first European expedition deep into the territory of the modern-day United States, was the first European documented to have crossed the Mississippi River....
when he undertook an expedition to Florida. She spent many years scanning the horizon for signs of his returning ship (unbeknown to her, he had died). The figure became the symbol of the city of Havana (it features on the Havana Club
Havana Club
Havana Club is a brand of rum, made in Santa Cruz del Norte, Cuba. The brand was established by José Arechabala in 1878. After the Cuban Revolution of 1959, the distillery and company was nationalized by the Cuban government; subsequently, the Arechabala family left for Spain, then emigrated to the...
rum label), and is now held at the City Museum housed in the Palacio de los Capitanes Generales
Palacio de los Capitanes Generales
The Palacio de los Capitanes Generales is the former official residence of the governors of Havana, Cuba. Located on the eastern side of the Plaza de Armas in Old Havana it is home to the Museum of the City of Havana...
in the Plaza de Armas, while a copy is in place on the watchtower. The façade of the fortress was demolished in 1851 to allow O’Reilly Street to go all the way to the docks, and prevent El Templete
El Templete
El Templete is a monument in Havana, Cuba, that pays homage to the place where the foundation of the town of San Cristóbal de la Habana was celebrated in 1519. The monument consists of bust of Christopher Columbus and three canvases painted by Jean Baptiste Vermay...
, completed in 1828, from being overshadowed by the fortress.

The fortress was home to the National Archive from 1899 and the National Library from 1938 up until 1957, when both were relocated to a purpose-built library in Plaza de la Revolución
Plaza de la Revolucion
Plaza de la Revolución is a municipality and a square in Havana, Cuba.The municipality stretches from the square down to the sea at the Malecón and includes the Vedado district.- Square :...
. After the Cuban Revolution
Cuban Revolution
The Cuban Revolution was an armed revolt by Fidel Castro's 26th of July Movement against the regime of Cuban dictator Fulgencio Batista between 1953 and 1959. Batista was finally ousted on 1 January 1959, and was replaced by a revolutionary government led by Castro...
in 1959, it housed the offices the National Commission of Monuments and the Centre of Preservation, Restoration and Museology. Used briefly as the Museum of Arms, the conditions within the fortress were not conducive to the preservation of the displays. In 1977, on the 400th anniversary of completion, the building was inaugurated as a museum and used to display exhibitions of Cuban contemporary and international art. In 1990, it became the National Museum of Cuban Ceramics. In 2010, Castillo de la Real Fuerza reopened as a Cuba’s premier maritime museum. (There is also a small naval museum in Cienfuegos.)
The museum contains excellent exhibits of Cuba’s maritime past from pre-Columbian days through to the 18th Century with the Royal Shipyard of Havana, one of the largest in the world which built nearly 200 ships for the Spanish Crown. The museum features a huge four metre model of the Santisima Trinidad located on the main floor with a large interactive touch screen which describes life aboard an 18th Century ship-of-the-line in Spanish, French, and English. The original ship was launched into Havana Bay on March 2, 1769 and was the largest ship in the world in the 18th Century, with 140 canons on four gun decks. She was one of four Cuban built ships at the Battle of Trafalgar in 1805. Downstairs you will also find ancient navigational instruments, underwater archaeological artifacts, and gold and silver from the colonial era. Also note the original weathervane, La Giraldilla, while her replica moves in the breeze on the top of the fortress tower which also commands a fantastic view of the city. The second level of the museum hosts many other historic and contemporary models of ships with links to Cuba and is also a good location for viewing the harbour and city skyline.