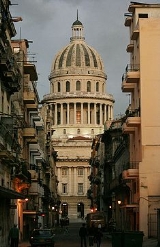 Encyclopedia
Old Havana contains the core of the original city of Havana
Havana
Havana is the capital city, province, major port, and leading commercial centre of Cuba. The city proper has a population of 2.1 million inhabitants, and it spans a total of — making it the largest city in the Caribbean region, and the most populous...
. The positions of the original Havana city walls are the modern boundaries of Old Havana.

Old Havana is a UNESCO World Heritage Site and the name also refers to one of the municipalities of the city of Havana
Havana
Havana is the capital city, province, major port, and leading commercial centre of Cuba. The city proper has a population of 2.1 million inhabitants, and it spans a total of — making it the largest city in the Caribbean region, and the most populous...
, Cuba, with the latter's boundaries extending to the south and west beyond the original city.

Havana Vieja was founded by the Spanish in 1519 in the natural harbor of the Bay of Havana. It became a stopping point for the treasure laden Spanish Galleon
Galleon
A galleon was a large, multi-decked sailing ship used primarily by European states from the 16th to 18th centuries. Whether used for war or commerce, they were generally armed with the demi-culverin type of cannon.-Etymology:...
s on the crossing between the New World
New World
The New World is one of the names used for the Western Hemisphere, specifically America and sometimes Oceania . The term originated in the late 15th century, when America had been recently discovered by European explorers, expanding the geographical horizon of the people of the European middle...
and the Old World
Old World
The Old World consists of those parts of the world known to classical antiquity and the European Middle Ages. It is used in the context of, and contrast with, the "New World" ....
. In the 17th century it was one of the main shipbuilding centers. The city was built in baroque
Baroque
The Baroque is a period and the style that used exaggerated motion and clear, easily interpreted detail to produce drama, tension, exuberance, and grandeur in sculpture, painting, literature, dance, and music...
and neoclassic
Neoclassicism
Neoclassicism is the name given to Western movements in the decorative and visual arts, literature, theatre, music, and architecture that draw inspiration from the "classical" art and culture of Ancient Greece or Ancient Rome...
style. Many buildings have fallen in ruin in the later half of the 20th century, but a number are being restored. The narrow streets of old Havana contain many buildings, accounting for perhaps as many as one-third of the approximately 3,000 buildings found in Old Havana. It is the ancient city formed from the port, the official center and the Plaza de Armas. Old Havana was destroyed and burned by the French corsair Jacques de Sores
Jacques de Sores
Jacques de Sores was a French pirate who attacked and burnt Havana, Cuba in 1555.Other than his attack on Havana, little is known of de Sores. He was nicknamed "The Exterminating Angel"...
. The pirate had taken Havana easily, plundering the city and burning much of it to the ground. After limiting the scarce defenders, De Sores left without obtaining the enormous wealth that he was hoping to find in Havana. The city remained devastated and set on fire. Since the incident, the Spanish brought soldiers and started building fortresses and walls to protect the city. Castillo de la Real Fuerza
Castillo de la Real Fuerza
The Castillo de la Real Fuerza is a fortress on the western side of the harbour in Havana, Cuba, set back from the entrance, and bordering the Plaza de Armas. Originally built to defend against attack by pirates, it suffered from a poor strategic position too far inside the bay...
was the first fortress built; initiated in 1558, the construction was overseen by the engineer Bartolomé Sanchez.

Old Havana resembles Cadiz and Tenerife. Alejo Carpentier
Alejo Carpentier
Alejo Carpentier y Valmont was a Cuban novelist, essayist, and musicologist who greatly influenced Latin American literature during its famous "boom" period. Born in Lausanne, Switzerland, Carpentier grew up in Havana, Cuba; and despite his European birthplace, Carpentier strongly self-identified...
called it "de las columnas"(of the columns), but it could also be named for the gateways, the revoco, the deterioration and the rescue, the intimacy, the shade, the cool, the courtyards... In her there are all the big ancient monuments, the forts, the convents and churches, the palaces, the alleys, the arcade, the human density. The Cuban State has undertaken enormous efforts to preserve and to restore Old Havana through the efforts of the Office of the Historian of the City, directed by Eusebio Leal
Eusebio Leal
Eusebio Leal Spengler, , is the Havana City Historian, director of the restoration program of Old Havana and its historical center, UNESCO World Heritage Site, Deputy to the National Assembly of the Popular Power in the IV, V and I SAW Legislature, Ambassador of Good Will of the United Nations,...
.

In 2008, Hurricane Ike destroyed many structures in Old Havana, overturning years of conservation work directed at the iconic antiquated buildings of the area. Not only did it damage historic buildings, but it forced many of Old Havana's residents to flee for safety. The threats that hurricanes pose adds to an already tenuous state for Old Havana's many historic buildings. Age, decay, and neglect combine with natural factors in a complex set of threats to the long-term preservation of this historic old town.

Torrelavega
Torrelavega
Torrelavega is a municipality and important industrial and commercial hub in the single province Autonomous Community of Cantabria in northern Spain....
, Spain Viveiro
Viveiro
Viveiro is a town and municipality in the province of Lugo, in the northwestern Galician autonomous community of Spain. It borders on the Cantabric Sea, to the west of Xove and to the east of O Vicedo...
, Spain Cartagena
Cartagena, Colombia
Cartagena de Indias , is a large Caribbean beach resort city on the northern coast of Colombia in the Caribbean Coast Region and capital of Bolívar Department...
, Colombia Guanajuato, Guanajuato
Guanajuato, Guanajuato
Guanajuato is a city and municipality in central Mexico and the capital of the state of the same name. It is located in a narrow valley, which makes the streets of the city narrow and winding. Most are alleys that cars cannot pass through, and some are long sets of stairs up the mountainsides....
, Mexico Sintra
Sintra
Sintra is a town within the municipality of Sintra in the Grande Lisboa subregion of Portugal. Owing to its 19th century Romantic architecture and landscapes, becoming a major tourist centre, visited by many day-trippers who travel from the urbanized suburbs and capital of Lisbon.In addition to...
, Portugal, since 2000