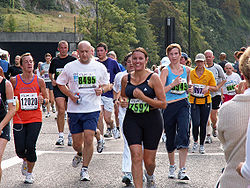 A half marathon is a road running
Road running
Road running is the sport of running on a measured course over an established road . These events would be classified as long distance according to athletics terminology, with distances typically ranging from 5 kilometers to 42.2 kilometers in the marathon. They may involve large numbers of runners...
event of 21.0975 kilometres (13.1 mi). It is half the distance of a marathon
Marathon
The marathon is a long-distance running event with an official distance of 42.195 kilometres , that is usually run as a road race...
and usually run on roads. Participation in half marathons has grown steadily recently. One of the main reasons for this is that it is a challenging distance, but does not require the same level of training that a marathon requires. In 2008, Running USA reported that the half marathon is the fastest growing type of race. A 2010 article by Universal Sports
Universal Sports
Universal Sports is an American television network that airs various sports, primarily those contested in the Olympic Games, including swimming, gymnastics, cycling, track and field, figure skating, skiing, bobsledding and triathlon.-Programming:...
echoed the growing popularity of the distance. New York Road Runners
New York Road Runners
New York Road Runners , founded in 1958 with 47 members, has grown into the foremost running organization, with a membership of 40,000. NYRR conducts more than 100 events each year, including races, classes, clinics, and lectures...
CEO Mary Wittenberg
Mary Wittenberg
Mary Wittenberg is the President and Chief Executive Officer of New York Road Runners . As leader of the organization, Wittenberg oversees the ING New York City Marathon and several other races, events, and programs that draw over 300,000 yearly participants.Under Wittenberg's leadership, the NYRR...
and noted running author and coach Jeff Galloway
Jeff Galloway
Jeff Galloway is a former American Olympian and the author of Galloway's Book on Running....
have also commented on the popularity of the distance. It is common for a half marathon event to be held concurrently with a marathon, using almost the same course with a late start, an early finish or shortcuts. The half marathon is also known as a 21K.

Most people tend to run a half marathon before running a full marathon. A half marathon will help to physically prepare the body for the 42.195 kilometres (26.2 mi) that makes up a marathon. Running a half marathon is both physically and mentally demanding. For those who have never run this distance before, it is imperative to train correctly. It is advised to slowly build up endurance over a three month period; decreasing the intensity of the training in the last couple of weeks before the event. If the body is over-worked, injury is more likely to occur. It is also important to eat correctly and stay hydrated before, during, and after the race.

This list is a chronological progression of record times for the half marathon. World record
World record
A world record is usually the best global performance ever recorded and verified in a specific skill or sport. The book Guinness World Records collates and publishes notable records of all types, from first and best to worst human achievements, to extremes in the natural world and beyond...
s in the half marathon are now ratified by the International Association of Athletics Federations
International Association of Athletics Federations
The International Association of Athletics Federations is the international governing body for the sport of athletics. It was founded in 1912 at its first congress in Stockholm, Sweden by representatives from 17 national athletics federations as the International Amateur Athletics Federation...
, the international governing body
Sport governing body
A sport governing body is a sports organization that has a regulatory or sanctioning function. Sport governing bodies come in various forms, and have a variety of regulatory functions. Examples of this can include disciplinary action for rule infractions and deciding on rule changes in the sport...
for the sport of athletics. The official IAAF world record for men is 58:23, set by Zersenay Tadese of Eritrea
Eritrea
Eritrea , officially the State of Eritrea, is a country in the Horn of Africa. Eritrea derives it's name from the Greek word Erethria, meaning 'red land'. The capital is Asmara. It is bordered by Sudan in the west, Ethiopia in the south, and Djibouti in the southeast...
on March 21, 2010, in Lisbon
Lisbon
Lisbon is the capital city and largest city of Portugal with a population of 545,245 within its administrative limits on a land area of . The urban area of Lisbon extends beyond the administrative city limits with a population of 3 million on an area of , making it the 9th most populous urban...
, Portugal
Portugal
Portugal , officially the Portuguese Republic is a country situated in southwestern Europe on the Iberian Peninsula. Portugal is the westernmost country of Europe, and is bordered by the Atlantic Ocean to the West and South and by Spain to the North and East. The Atlantic archipelagos of the...
. The official IAAF world record for women is 1:05:50, set by Mary Keitany
Mary Jepkosgei Keitany
Mary Jepkosgei Keitany is a runner from Kenya who specialises in the long distance events. She won silver at the 2007 IAAF World Road Running Championships and became the World Half Marathon champion two years later...
of Kenya
Kenya
Kenya , officially known as the Republic of Kenya, is a country in East Africa that lies on the equator, with the Indian Ocean to its south-east...
on February 18, 2011, in Ras Al Khaimah, United Arab Emirates
United Arab Emirates
The United Arab Emirates, abbreviated as the UAE, or shortened to "the Emirates", is a state situated in the southeast of the Arabian Peninsula in Western Asia on the Persian Gulf, bordering Oman, and Saudi Arabia, and sharing sea borders with Iraq, Kuwait, Bahrain, Qatar, and Iran.The UAE is a...
.

The current biggest half marathon in the world is the Göteborgsvarvet
Göteborgsvarvet
Göteborgsvarvet is an annual half marathon running competition in Gothenburg, Sweden . It is the largest annual running competition in Sweden, with about 40,000 participants each year. It is also the largest half-marathon running competition in the world, with its 2011 figure of 43 026...
, also known as Gothenburg half marathon, held annually in Gothenburg
Gothenburg
Gothenburg is the second-largest city in Sweden and the fifth-largest in the Nordic countries. Situated on the west coast of Sweden, the city proper has a population of 519,399, with 549,839 in the urban area and total of 937,015 inhabitants in the metropolitan area...
, Sweden
Sweden
Sweden , officially the Kingdom of Sweden , is a Nordic country on the Scandinavian Peninsula in Northern Europe. Sweden borders with Norway and Finland and is connected to Denmark by a bridge-tunnel across the Öresund....
, with 59,417 announced runners and 43,026 finishers in 2011. The largest ever held was Broloppet (the Bridge race) between Copenhagen
Copenhagen
Copenhagen is the capital and largest city of Denmark, with an urban population of 1,199,224 and a metropolitan population of 1,930,260 . With the completion of the transnational Øresund Bridge in 2000, Copenhagen has become the centre of the increasingly integrating Øresund Region...
-Malmö
Malmö
Malmö , in the southernmost province of Scania, is the third most populous city in Sweden, after Stockholm and Gothenburg.Malmö is the seat of Malmö Municipality and the capital of Skåne County...
with 79,719 finishers, held in connection with the Öresund Bridge
Oresund Bridge
The Øresund or Öresund Bridge is a combined twin-track railway and dual carriageway bridge-tunnel across the Øresund strait.The bridge connects Sweden and Denmark, and it is the longest road and rail bridge in Europe. The Øresund Bridge also connects two major Metropolitan Areas: those of the...
inauguration year 2000.