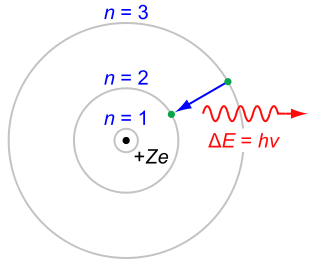 According to the Bohr model
Bohr model
In atomic physics, the Bohr model, introduced by Niels Bohr in 1913, depicts the atom as a small, positively charged nucleus surrounded by electrons that travel in circular orbits around the nucleus—similar in structure to the solar system, but with electrostatic forces providing attraction,...
of the atom
Atom
The atom is a basic unit of matter that consists of a dense central nucleus surrounded by a cloud of negatively charged electrons. The atomic nucleus contains a mix of positively charged protons and electrically neutral neutrons...
, electrons exist in quantized
Quantum
In physics, a quantum is the minimum amount of any physical entity involved in an interaction. Behind this, one finds the fundamental notion that a physical property may be "quantized," referred to as "the hypothesis of quantization". This means that the magnitude can take on only certain discrete...
energy levels surrounding the atom's nucleus
Atomic nucleus
The nucleus is the very dense region consisting of protons and neutrons at the center of an atom. It was discovered in 1911, as a result of Ernest Rutherford's interpretation of the famous 1909 Rutherford experiment performed by Hans Geiger and Ernest Marsden, under the direction of Rutherford. The...
. These energy levels are described by the principal quantum number
Principal quantum number
In atomic physics, the principal quantum symbolized as n is the firstof a set of quantum numbers of an atomic orbital. The principal quantum number can only have positive integer values...
n = 1, 2, 3, ... . Electrons may only exist in these states, and may only transit between these states.

The set of transitions from n ≥ 3 to n = 2 is called the Balmer series
Balmer series
The Balmer series or Balmer lines in atomic physics, is the designation of one of a set of six different named series describing the spectral line emissions of the hydrogen atom....
and its members are named sequentially by Greek letters:

For the Lyman series
Lyman series
In physics and chemistry, the Lyman series is the series of transitions and resulting ultraviolet emission lines of the hydrogen atom as an electron goes from n ≥ 2 to n = 1...
the naming convention is:

H-alpha has a wavelength
Wavelength
In physics, the wavelength of a sinusoidal wave is the spatial period of the wave—the distance over which the wave's shape repeats.It is usually determined by considering the distance between consecutive corresponding points of the same phase, such as crests, troughs, or zero crossings, and is a...
of 656.281 nm
Nanometre
A nanometre is a unit of length in the metric system, equal to one billionth of a metre. The name combines the SI prefix nano- with the parent unit name metre .The nanometre is often used to express dimensions on the atomic scale: the diameter...
, is visible in the red part of the electromagnetic spectrum
Electromagnetic spectrum
The electromagnetic spectrum is the range of all possible frequencies of electromagnetic radiation. The "electromagnetic spectrum" of an object is the characteristic distribution of electromagnetic radiation emitted or absorbed by that particular object....
, and is the easiest way for astronomers to trace the ionized hydrogen content of gas clouds. Since it takes nearly as much energy to excite the hydrogen atom's electron from n = 1 to n = 3 as it does to ionize the hydrogen atom, the probability of the electron being excited to n = 3 without being removed from the atom is very small. Instead, after being ionized, the electron and proton recombine to form a new hydrogen atom. In the new atom, the electron may begin in any energy level, and subsequently cascades to the ground state (n = 1), emitting photons with each transition. Approximately half the time, this cascade will include the n = 3 to n = 2 transition and the atom will emit H-alpha light. Therefore, the H-alpha line occurs where hydrogen is being ionized.

The H-alpha line saturates (self-absorbs) relatively easily because hydrogen is the primary component of nebulae, so while it can indicate the shape and extent of the cloud, it cannot be used to accurately determine the cloud's mass. Instead, molecules such as carbon dioxide
Carbon dioxide
Carbon dioxide is a naturally occurring chemical compound composed of two oxygen atoms covalently bonded to a single carbon atom...
, carbon monoxide
Carbon monoxide
Carbon monoxide , also called carbonous oxide, is a colorless, odorless, and tasteless gas that is slightly lighter than air. It is highly toxic to humans and animals in higher quantities, although it is also produced in normal animal metabolism in low quantities, and is thought to have some normal...
, formaldehyde
Formaldehyde
Formaldehyde is an organic compound with the formula CH2O. It is the simplest aldehyde, hence its systematic name methanal.Formaldehyde is a colorless gas with a characteristic pungent odor. It is an important precursor to many other chemical compounds, especially for polymers...
, ammonia
Ammonia
Ammonia is a compound of nitrogen and hydrogen with the formula . It is a colourless gas with a characteristic pungent odour. Ammonia contributes significantly to the nutritional needs of terrestrial organisms by serving as a precursor to food and fertilizers. Ammonia, either directly or...
, or methyl cyanide are typically used to determine the mass of a cloud.

A hydrogen-alpha filter is an optical filter designed to transmit a narrow bandwidth of light generally centered on the H-alpha wavelength. They are characterized by a bandpass width that measures the width of the wavelength band that is transmitted. These filters are manufactured by multiple (~50) layers of vacuum-deposited
Vacuum deposition
Vacuum deposition is a family of processes used to deposit layers atom-by-atom or molecule-by-molecule at sub-atmospheric pressure on a solid surface. The layers may be as thin as one atom to millimeters thick . There may be multiple layers of different materials...
layers. These layers are selected to produce interference effects that filter out any wavelengths except at the requisite band.

Alternatively, an etalon may be used as the narrow band filter (in conjunction with a "blocking filter" or energy rejection filter) to pass only a narrow (<0.1 nm) range of wavelengths of light centred around the H-alpha emission line. The physics of the etalon and the dichroic interference filters are essentially the same (relying on constructive/destructive interference of light reflecting between surfaces), but the implementation is different (an interference filter relies on the interference of internal reflections). Due to the high velocities sometimes associated with features visible in H-alpha light (such as fast moving prominences and ejections), solar H-alpha etalons can often be tuned (by tilting or changing the temperature) to cope with the associated Doppler effect
Doppler effect
The Doppler effect , named after Austrian physicist Christian Doppler who proposed it in 1842 in Prague, is the change in frequency of a wave for an observer moving relative to the source of the wave. It is commonly heard when a vehicle sounding a siren or horn approaches, passes, and recedes from...
.
The source of this article is wikipedia, the free encyclopedia.  The text of this article is licensed under the GFDL.