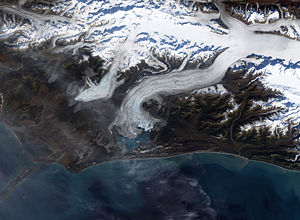 Bering Glacier is a glacier
Glacier
A glacier is a large persistent body of ice that forms where the accumulation of snow exceeds its ablation over many years, often centuries. At least 0.1 km² in area and 50 m thick, but often much larger, a glacier slowly deforms and flows due to stresses induced by its weight...
in the U.S. state
U.S. state
A U.S. state is any one of the 50 federated states of the United States of America that share sovereignty with the federal government. Because of this shared sovereignty, an American is a citizen both of the federal entity and of his or her state of domicile. Four states use the official title of...
of Alaska
Alaska
Alaska is the largest state in the United States by area. It is situated in the northwest extremity of the North American continent, with Canada to the east, the Arctic Ocean to the north, and the Pacific Ocean to the west and south, with Russia further west across the Bering Strait...
. It currently terminates in Vitus Lake
Vitus Lake
Vitus Lake is a lake in Alaska. It is 23 km long and 9 km wide. It is named for Vitus Bering, leader of the 1741 expedition to Alaska. Vitus Lake forms the southern limit of the Bering Lobe, outlets via the Seal River to the Gulf of Alaska. It is also allegedly home to Vittie, a...
south of Alaska’s Wrangell-St. Elias National Park, about 10 km (6.2 mi) from the Gulf of Alaska
Gulf of Alaska
The Gulf of Alaska is an arm of the Pacific Ocean defined by the curve of the southern coast of Alaska, stretching from the Alaska Peninsula and Kodiak Island in the west to the Alexander Archipelago in the east, where Glacier Bay and the Inside Passage are found.The entire shoreline of the Gulf is...
. Combined with the Bagley Icefield
Bagley Icefield
The Bagley Icefield in southeastern Alaska is the largest nonpolar icefield in North America. It was named after James W. Bagley, a USGS topographic engineer who developed the Bagley T-3 camera and mapped Alaska prior to World War I...
, where the snow that feeds the glacier accumulates, the Bering is the largest glacier in North America
North America
North America is a continent wholly within the Northern Hemisphere and almost wholly within the Western Hemisphere. It is also considered a northern subcontinent of the Americas...
. Warmer temperatures and changes in precipitation over the past century have thinned the Bering Glacier by several hundred meters. Since 1900 the terminus
Glacier terminus
A glacier terminus, or snout, is the end of a glacier at any given point in time. Although glaciers seem motionless to the observer, in reality glaciers are in endless motion and the glacier terminus is always either advancing or retreating...
has retreated as much as 12 km (7.5 mi). The Bering Glacier exhibits "surges", acceleration events of the flow rate of the glacier, every 20 years or so. During these periods the glacier terminus advances. The surges are generally followed by periods of retreat, so despite the periodic advances the glacier has been shrinking overall. Most glaciers along the Alaskan coast have been retreating along with the Bering Glacier.

The glacial retreat has an interesting side effect, an increase in the frequency of earthquakes in the region. The Wrangell
Wrangell Mountains
The Wrangell Mountains are a high mountain range of eastern Alaska in the United States. Much of the range is included in Wrangell-Saint Elias National Park and Preserve. The Wrangell Mountains are almost entirely volcanic in origin, and they include the second and third highest volcanoes in the...
and St. Elias mountain ranges that spawn the Bering Glacier were created by the collision of the Pacific
Pacific Plate
The Pacific Plate is an oceanic tectonic plate that lies beneath the Pacific Ocean. At 103 million square kilometres, it is the largest tectonic plate....
and North American
North American Plate
The North American Plate is a tectonic plate covering most of North America, Greenland, Cuba, Bahamas, and parts of Siberia, Japan and Iceland. It extends eastward to the Mid-Atlantic Ridge and westward to the Chersky Range in eastern Siberia. The plate includes both continental and oceanic crust...
tectonic plates [the Pacific Plate is sliding underneath (being subducted by) the North American Plate]. The weight of the vast amount of ice in the Bering Glacier is enough to depress the Earth's crust, stabilizing the boundary between the two plates. As the glaciers lose mass, the pressure of the ice is diminished. This reduced compression allows the rocks along faults to move more freely, resulting in more earthquakes.

Scientists from the Michigan Tech Research Institute, working with U.S. Geological Survey
United States Geological Survey
The United States Geological Survey is a scientific agency of the United States government. The scientists of the USGS study the landscape of the United States, its natural resources, and the natural hazards that threaten it. The organization has four major science disciplines, concerning biology,...
and U.S. Bureau of Land Management have recently discovered that the glacier is releasing approximately 30 cubic kilometres (7.2 cu mi) of water a year, more than twice the amount of water in the entire Colorado River
Colorado River
The Colorado River , is a river in the Southwestern United States and northwestern Mexico, approximately long, draining a part of the arid regions on the western slope of the Rocky Mountains. The watershed of the Colorado River covers in parts of seven U.S. states and two Mexican states...
.
The source of this article is wikipedia, the free encyclopedia.  The text of this article is licensed under the GFDL.