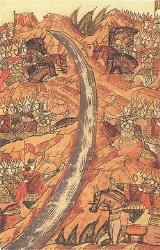 Encyclopedia
The Great Standoff on the Ugra river ( in Russian
Russian language
Russian is a Slavic language used primarily in Russia, Belarus, Uzbekistan, Kazakhstan, Tajikistan and Kyrgyzstan. It is an unofficial but widely spoken language in Ukraine, Moldova, Latvia, Turkmenistan and Estonia and, to a lesser extent, the other countries that were once constituent republics...
, also (Ugorschina in English
English language
English is a West Germanic language that arose in the Anglo-Saxon kingdoms of England and spread into what was to become south-east Scotland under the influence of the Anglian medieval kingdom of Northumbria...
, derived from Ugra) was a standoff between the forces of Akhmat
Akhmat Khan
Akhmat Khan was a khan of the Great Horde between 1465 and 1481.In 1465, Akhmat seized power in the Horde by rising against his brother Maxmud of Astrakhan, who had been its ruler since 1459. In 1472, Akhmat entered into alliance with the Polish king Casimir IV against Ivan III...
, Khan
Khan (title)
Khan is an originally Altaic and subsequently Central Asian title for a sovereign or military ruler, widely used by medieval nomadic Turko-Mongol tribes living to the north of China. 'Khan' is also seen as a title in the Xianbei confederation for their chief between 283 and 289...
of the Great Horde
Great Horde
- Dissolution of the Golden Horde :The peripheral regions of the Golden Horde broke off as follows: 1438: Kazan Khanate, 1441: Crimean Khanate, 1466: Astrakhan Khanate The remnant, which became known as the Great Horde, was left with the steppe between the Dnieper and Yaik, the capital Sarai and a...
, and the Grand Prince Ivan III of Russia
Russia
Russia or , officially known as both Russia and the Russian Federation , is a country in northern Eurasia. It is a federal semi-presidential republic, comprising 83 federal subjects...
in 1480, which resulted in the retreat of the Tataro-Mongols and is often taken as the end of Tatar rule over Russia.

In 1476 Ivan III ceased paying annual tribute to the Horde. (The Mongols had collected this tribute since the time of Batu Khan
Batu Khan
Batu Khan was a Mongol ruler and founder of the Ulus of Jochi , the sub-khanate of the Mongol Empire. Batu was a son of Jochi and grandson of Genghis Khan. His ulus was the chief state of the Golden Horde , which ruled Rus and the Caucasus for around 250 years, after also destroying the armies...
in the 13th century.) At the time, Akhmat Khan was busy with his struggle against the Crimean Khanate
Crimean Khanate
Crimean Khanate, or Khanate of Crimea , was a state ruled by Crimean Tatars from 1441 to 1783. Its native name was . Its khans were the patrilineal descendants of Toqa Temür, the thirteenth son of Jochi and grandson of Genghis Khan...
and did not do anything seriously except to demand tribute and send a Mongol noyan
Noyan
Noyan, noyon was a title of authority in the Mongol Empire and later periods...
to Moscow. By 1480 Russia and Crimea were in alliance against the Great Horde and Poland-Lithuania under Casimir IV
Casimir IV
Casimir IV may refer to:*Polish king Casimir IV Jagiellon*Casimir IV, Duke of Pomerania...
. On the Lithuanian side, this was partly provoked by the Russian annexation of Novgorod in 1478.

In early 1480 the Teutonic Order of Livonia
Livonia
Livonia is a historic region along the eastern shores of the Baltic Sea. It was once the land of the Finnic Livonians inhabiting the principal ancient Livonian County Metsepole with its center at Turaida...
subjected the western borders of Russia to multiple attacks. In that year Livonia attacked Pskov and the following year Moscovy invaded Livonia, resulting in a series of treaties. In January of 1480, Ivan's brothers Boris Volotsky and Andrey Bolshoy
Andrey Bolshoy
Andrey Vasilyevich Bolshoy, nicknamed Goryai , was the third son of Vasili II of Russia who transformed his capital in Uglich into a major centre of political power and ensured the town's prosperity for two centuries to come.After the death of his father in 1462, Andrey Bolshoy inherited the...
became dissatisfied with his growing princely authority and turned against him. Akhmat Khan decided to take advantage of the political discontent and in June of 1480 sent a reconnaissance
Reconnaissance
Reconnaissance is the military term for exploring beyond the area occupied by friendly forces to gain information about enemy forces or features of the environment....
unit to investigate the right bank of the Oka river
Oka River
Oka is a river in central Russia, the largest right tributary of the Volga. It flows through the regions of Oryol, Tula, Kaluga, Moscow, Ryazan, Vladimir, and Nizhny Novgorod and is navigable over a large part of its total length, as far upstream as to the town of Kaluga. Its length exceeds...
. In autumn his army started to advance towards Moscow
Moscow
Moscow is the capital, the most populous city, and the most populous federal subject of Russia. The city is a major political, economic, cultural, scientific, religious, financial, educational, and transportation centre of Russia and the continent...
, he passed through the Lithuanian territories of his ally king Casimir and stood on the Lithuanian-Russian border on the river Ugra. In the face of such grave danger, the Russian boyars fractured into two groups: one, led by okolnichies
Okolnichy
Okolnichy was an old rank and a position at the court of Moscow rulers from the Mongol invasion of Rus' until the government reform undertaken by Peter the Great...
Oschera and Mamon, wanted Ivan III to flee; the other wanted to fight the Horde. It could be that Ivan's final decision to face the Horde was affected by the Russians
Russians
The Russian people are an East Slavic ethnic group native to Russia, speaking the Russian language and primarily living in Russia and neighboring countries....
who had demanded action on the part of the Grand Prince. 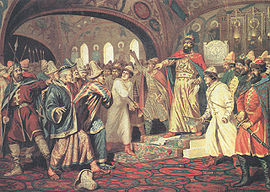 On October 8, 1480 Akhmat Khan planned to bypass the Oka river from the west and thus avoid Ivan's regiment
Regiment
A regiment is a major tactical military unit, composed of variable numbers of batteries, squadrons or battalions, commanded by a colonel or lieutenant colonel...
s which were located in Kolomna
Kolomna
Kolomna is an ancient city and the administrative center of Kolomensky District of Moscow Oblast, Russia, situated at the confluence of the Moskva and Oka Rivers, southeast of Moscow. The area of the city is about . The city was founded in 1177...
, Serpukhov
Serpukhov
Serpukhov is a city in Moscow Oblast, Russia, which is situated at the confluence of the Oka and the Nara Rivers. It is located south from Moscow on the Moscow—Simferopol highway. The Moscow—Tula railway passes through the town. Population: -History:...
and Tarusa
Tarusa
Tarusa is a town and the administrative center of Tarussky District of Kaluga Oblast, Russia, located on the left bank of the Oka River, south of Serpukhov, northeast of Kaluga, and about south of Moscow. Population:...
). This would allow Akhmat Khan to unite his army with Casimir's. Akhmat Khan's forces approached the Ugra river. (The main Russian defense line ran along the Oka from Nizhny Novgorod
Nizhny Novgorod
Nizhny Novgorod , colloquially shortened to Nizhny, is, with the population of 1,250,615, the fifth largest city in Russia, ranking after Moscow, St. Petersburg, Novosibirsk, and Yekaterinburg...
to Kaluga
Kaluga
Kaluga is a city and the administrative center of Kaluga Oblast, Russia, located on the Oka River southwest of Moscow. Population: It is served by Grabtsevo Airport.-History:...
where to Oka
Oka River
Oka is a river in central Russia, the largest right tributary of the Volga. It flows through the regions of Oryol, Tula, Kaluga, Moscow, Ryazan, Vladimir, and Nizhny Novgorod and is navigable over a large part of its total length, as far upstream as to the town of Kaluga. Its length exceeds...
turns from north to east. The Ugra extends this line to the west from Kaluga toward Lithuania.) At the Ugra, Akhmat Khan was met by the Russian army under the joint command of Ivan Molodoy (Ivan Junior, Ivan's son) and Andrey Menshoy (Andrey Smaller One, Ivan's brother). Akhmat's attempt to cross the Ugra river was rebuffed in a 4-day battle. The Russian chronicle says the Russians succeeded through the use of firearms, of which the Tatars had none.

After the battle, Akhmat then retreated to the town of Vorotynsk
Vorotynsk
Vorotynsk was one of the Upper Oka towns and seat of the mediaeval Princes Vorotynsky. It was first mentioned in the Hypatian Codex under the year 1155. In 1480, Vorotynsk was the principal base of Russian operations against the Tatars during the Great standing on the Ugra river...
, where he decided to wait for Casimir's army. Ivan III moved his army to Kremenets
Kremenets
Kremenets is a city in the Ternopil Oblast of western Ukraine. It is the administrative center of the Kremenets Raion , and rests 18 km north-east of the great Pochayiv Monastery...
and started to negotiate with the khan, in an attempt to buy some time to restore his relations with his rebellious brothers (hence, the Great standing on the Ugra river). It took Ivan III four days (from September, 30 to October, 3) to reconcile with his brothers and another 17 days (until 20 October) for his brothers' armies to arrive at Kremenets. Unlike Dmitry Donskoy in a similar situation one hundred years before
Battle of Kulikovo
The Battle of Kulikovo was a battle between Tatar Mamai and Muscovy Dmitriy and portrayed by Russian historiography as a stand-off between Russians and the Golden Horde. However, the political situation at the time was much more complicated and concerned the politics of the Northeastern Rus'...
, Ivan decided not to cross the river, but to keep on his shore and bide the time.

Watching the increasing Russian army and receiving no word from the Polish king, Akhmat chose not to attack the Russians. In the meantime, Casimir IV was dealing with his own country's internal affairs and fighting with the Crimean Khanate
Crimean Khanate
Crimean Khanate, or Khanate of Crimea , was a state ruled by Crimean Tatars from 1441 to 1783. Its native name was . Its khans were the patrilineal descendants of Toqa Temür, the thirteenth son of Jochi and grandson of Genghis Khan...
. The Mongols waited for reinforcements until November 11 and then, lacking supplies and suffering from epidemics and freezing weather, turned south. English sources say that Akhmat was waiting for the river to freeze so that it could be crossed, and for the arrival of Lithuanian forces. These did not arrive because of Crimean raids and internal troubles in Lithuania. He turned south due to the onset of winter and the possible threat of Crimean, Nogai or other attacks on his unprotected home base, a common problem in nomadic warfare.

Tatar retreat was seen as victory in Russia. Ivan and his armies returned to Moscow to celebrate. As Nikolai Karamzin wrote in his "History of Russian State": "It should be an odd image: two armies ran away from each other, not pursued by anyone".

On January 6, 1481 Akhmat Khan was killed in a clash with the Nogais under Ibak Khan
Ibak Khan
Ibak Khan was a Shaybanid khan of Sibir about whom the sources are contradictory. He is also called Abak, Ivak, Ibaq, Khan of Tyumen, and Said Ibrakhim Khan....
, a princeling from the Khanate of Sibir. In 1502 Crimea destroyed the Great Horde as an organization thereby removing the buffer between Russia and Crimea and leading to a series of Russo-Crimean wars that lasted until 1784.

In popular memory, the Ugra Standoff is taken as the end of the 'Tatar Yoke'. Modern writers are more sceptical and see it as an important landmark in the gradual expansion of Russia and the gradual decline of the Turko-Mongol empire.

Perhaps the most important result of the Russo-Crimean alliance was its effect on Lithuania. In 1480-1515 Russia expanded out of its Oka-Volga cradle west to Smolensk and southwest across the Ugra and down the west side of the Oka as far as Novgorod-Seversky.