Encyclopedia
Noyan, noyon was a title of authority
Title of authority
Title of authority, title of office or title of command is the official designation of a position held in an organization associated with certain duties of authority....
in the Mongol Empire
Mongol Empire
The Mongol Empire , initially named as Greater Mongol State was a great empire during the 13th and 14th centuries...
and later periods. In modern Mongolian the word is used as a form of address similar to "Mister
Mr.
Mister, usually written in its abbreviated form Mr or Mr. , is a commonly used English honorific for men under the rank of knighthood. The title derived from master, as the equivalent female titles, Mrs., Miss, and Ms, all derived from the archaic mistress...
" or "Monsieur
Monsieur
' is an honorific title that used to refer to or address the eldest living brother of the king in the French royal court. It is also a customary French title of respect and term of address for a French-speaking man, corresponding to such English titles as Mr...
". 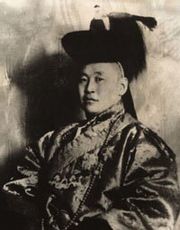 Initially, it was a term for a military commander in the army of Genghis Khan
Genghis Khan
Genghis Khan , born Temujin and occasionally known by his temple name Taizu , was the founder and Great Khan of the Mongol Empire, which became the largest contiguous empire in history after his death....
: the term noyon applied to commanders of tumen
Tumen
Tumen or Tümen was a part of the decimal system used by Turkic and Mongol peoples to organize their armies. Tumen is an army unit of 10,000 soldiers...
s and minghans, military units of 10,000 soldiers and 1000 soldiers respectively. During conquests, noyons used to receive territories for administration and they effectively became Mongolian aristocracy, which existed until the 20th century. Noyans were above the ordinary Mongols in social rank but below the descendants of Genghis and his brothers. They were sometimes called emir
Emir
Emir , meaning "commander", "general", or "prince"; also transliterated as Amir, Aamir or Ameer) is a title of high office, used throughout the Muslim world...
or bey
Bey
Bey is a title for chieftain, traditionally applied to the leaders of small tribal groups. Accoding to some sources, the word "Bey" is of Turkish language In historical accounts, many Turkish, other Turkic and Persian leaders are titled Bey, Beg, Bek, Bay, Baig or Beigh. They are all the same word...
in the Ulus of Jochi, the Ilkhanate
Ilkhanate
The Ilkhanate, also spelled Il-khanate , was a Mongol khanate established in Azerbaijan and Persia in the 13th century, considered a part of the Mongol Empire...
and the Chagatai Khanate
Chagatai Khanate
The Chagatai Khanate was a Turko-Mongol khanate that comprised the lands ruled by Chagatai Khan , second son of the Great Khan Genghis Khan, and his descendents and successors...
while the Yuan
Yuan Dynasty
The Yuan Dynasty , or Great Yuan Empire was a ruling dynasty founded by the Mongol leader Kublai Khan, who ruled most of present-day China, all of modern Mongolia and its surrounding areas, lasting officially from 1271 to 1368. It is considered both as a division of the Mongol Empire and as an...
records gave the equivalent as guanren since their main task was waging warfare.

Usually notable persons are referred to with the addition of "Noyan" after the ordinary personal name, similarly to the usage of the title "Khan", e.g., Jebe
Jebe
Chepe Noyan was one of the prominent Noyans of Genghis Khan. His clan was Besud, which belonged to the Taichud tribe, which was at the time of Genghis Khan under Targudai Khiriltug's leadership....
Noyan, Chormaqan Noyan, Sali Noyan, Karik Noyan and so on.


After the Mongol Empire

The Qing Dynasty
Qing Dynasty
The Qing Dynasty was the last dynasty of China, ruling from 1644 to 1912 with a brief, abortive restoration in 1917. It was preceded by the Ming Dynasty and followed by the Republic of China....
, which ruled Mongolia from 1694 to 1911, entrusted rule in Mongolia
Mongolia
Mongolia is a landlocked country in East and Central Asia. It is bordered by Russia to the north and China to the south, east and west. Although Mongolia does not share a border with Kazakhstan, its western-most point is only from Kazakhstan's eastern tip. Ulan Bator, the capital and largest...
to the descendants of Genghis Khan, who were thus called noyan. The term noyan in this epoch acquired the connotation of nobleman since Mongolia was mostly at peace. After 1921 the word darga (boss) replaced the aristocratic noyan as the term for officials.
The source of this article is wikipedia, the free encyclopedia.  The text of this article is licensed under the GFDL.