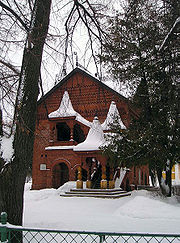 After the death of his father in 1462, Andrey Bolshoy inherited the cities of Uglich, Zvenigorod
Zvenigorod
Zvenigorod is an old town in Moscow Oblast, Russia. Population: -History:The community has existed since the 12th century, although its first written mention is dated 1338. The town's name is based either on a personal name or on a hydronym Zvenigorod is an old town in Moscow Oblast, Russia....
, and Bezhetsk
Bezhetsk
Bezhetsk is a town in Tver Oblast, Russia, located on the Mologa River at its confluence with the Ostrechina River. It serves as the administrative center of Bezhetsky District, although it is not administratively a part of it. Population: 29,000 ....
. His relations with his older brother, Ivan III of Moscow
Ivan III of Russia
Ivan III Vasilyevich , also known as Ivan the Great, was a Grand Prince of Moscow and "Grand Prince of all Rus"...
, were cordial at first. It was ten years later that the death of their brother, the childless Yury of Dmitrov, led to bad blood between the two. Ivan III appropriated Yury's appanage
Appanage
An apanage or appanage or is the grant of an estate, titles, offices, or other things of value to the younger male children of a sovereign, who would otherwise have no inheritance under the system of primogeniture...
for himself, rather than sharing it with his brothers. At last he granted some of Yury's lands to his other brothers, except Andrei Bolshoy, who had been coveting them more than others.

Another conflict between the two brothers was triggered by the right of boyar
Boyar
A boyar, or bolyar , was a member of the highest rank of the feudal Moscovian, Kievan Rus'ian, Bulgarian, Wallachian, and Moldavian aristocracies, second only to the ruling princes , from the 10th century through the 17th century....
s to leave their own prince for the courts of other princes. Ivan III would only allow such practice if a boyar were to move to Moscow. In 1479, one displeased boyar, Prince Lyko-Obolensky
Obolensky
Obolensky is the name of a princely Russian family of the Rurik Dynasty. The family of aristocrats mostly fled Russia in 1917 during the Russian Revolution...
, left the Moscow Kremlin
Moscow Kremlin
The Moscow Kremlin , sometimes referred to as simply The Kremlin, is a historic fortified complex at the heart of Moscow, overlooking the Moskva River , Saint Basil's Cathedral and Red Square and the Alexander Garden...
and settled at the court of his brother Boris, ruler of Volokolamsk
Volokolamsk
Volokolamsk is a town and the administrative center of Volokolamsky District of Moscow Oblast, Russia, located on the Gorodenka River, not far from its confluence with the Lama River, northwest of Moscow. Population: -History:...
. When the latter refused to extradite the boyar, Ivan III ordered to capture Lyko-Obolensky and deliver him to Moscow in chains. Andrei Bolshoy took the side of the offended prince of Volokolamsk. The two brothers joined their armies and marched towards Novgorod and then to the Lithuania
Lithuania
Lithuania , officially the Republic of Lithuania is a country in Northern Europe, the biggest of the three Baltic states. It is situated along the southeastern shore of the Baltic Sea, whereby to the west lie Sweden and Denmark...
n border. There, they began to negotiate with the Polish
Kingdom of Poland (1385–1569)
The Kingdom of Poland of the Jagiellons was the Polish state created by the accession of Jogaila , Grand Duke of Lithuania, to the Polish throne in 1386. The Union of Krewo or Krėva Act, united Poland and Lithuania under the rule of a single monarch...
king Kazimierz IV, who decided not to interfere in the conflict. Boris and Andrey then sought support in Pskov
Pskov
Pskov is an ancient city and the administrative center of Pskov Oblast, Russia, located in the northwest of Russia about east from the Estonian border, on the Velikaya River. Population: -Early history:...
, but to no avail.

In order to settle the conflict, Ivan III offered Andrei Bolshoy the cities of Kaluga
Kaluga
Kaluga is a city and the administrative center of Kaluga Oblast, Russia, located on the Oka River southwest of Moscow. Population: It is served by Grabtsevo Airport.-History:...
and Aleksin
Aleksin
Aleksin is a town and the administrative center of Aleksinsky District of Tula Oblast, Russia, located northwest of Tula. Population: -History:...
, but he refused. The invasion of Khan Akhmat
Akhmat Khan
Akhmat Khan was a khan of the Great Horde between 1465 and 1481.In 1465, Akhmat seized power in the Horde by rising against his brother Maxmud of Astrakhan, who had been its ruler since 1459. In 1472, Akhmat entered into alliance with the Polish king Casimir IV against Ivan III...
in 1480 reconciled the grand prince with his brothers. Ivan III became more tractable and promised to fulfill all their demands. Andrei and Boris moved their armies to the Ugra River and joined Ivan III in his stand-off with the Mongols
Great standing on the Ugra river
The Great Standoff on the Ugra river The Great Standoff on the Ugra river The Great Standoff on the Ugra river ( in Russian, also (Ugorschina in English, derived from Ugra) was a standoff between the forces of Akhmat, Khan of the Great Horde, and the Grand Prince Ivan III of Russia in 1480, which...
. Their reconciliation was mediated by their mother, metropolitan
Metropolitan bishop
In Christian churches with episcopal polity, the rank of metropolitan bishop, or simply metropolitan, pertains to the diocesan bishop or archbishop of a metropolis; that is, the chief city of a historical Roman province, ecclesiastical province, or regional capital.Before the establishment of...
and a number of bishop
Bishop
A bishop is an ordained or consecrated member of the Christian clergy who is generally entrusted with a position of authority and oversight. Within the Catholic Church, Eastern Orthodox, Oriental Orthodox Churches, in the Assyrian Church of the East, in the Independent Catholic Churches, and in the...
s. As a token of their reconciliation, the grand prince granted Andrei the city of Mozhaisk, the most coveted part of Yury’s appanage.

After the death of their mother in 1484, Andrei’s situation became perilous because his defiant stance and groundless claims filled Ivan III with misgivings. He was afraid that, in line with the ancient system of Rurikid succession, Andrey would attempt to usurp the throne of Muscovy after his own death. In 1488, Andrey was informed about Ivan's plans to dethrone and imprison him. Upon his epistolary complaint to the grand prince, the latter protested his innocence. In 1491, Ivan III ordered Andrei and Boris to send their armies to help out his ally Meñli I Giray
Meñli I Giray
Meñli I Giray , also spelled as Mengli I Giray, was a khan of the Crimean Khanate and the sixth son of the khanate founder Haci I Giray....
. For reasons unknown, Andrei disobeyed the grand prince. When he came to Moscow in 1492, he was arrested and put in prison, where he expired in 1493. Thereupon Andrey's sons — Ivan and Dmitry — were imprisoned in Vologda
Vologda
Vologda is a city and the administrative, cultural, and scientific center of Vologda Oblast, Russia, located on the Vologda River. The city is a major transport knot of the Northwest of Russia. Vologda is among the Russian cities possessing an especially valuable historical heritage...
, while their appanage — Uglich — was annexed into Muscovy.
The source of this article is wikipedia, the free encyclopedia.  The text of this article is licensed under the GFDL.