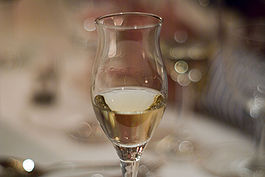 Grappa is an alcoholic beverage, a fragrant, grape-based pomace brandy
Pomace brandy
Pomace brandy is a liquor distilled from pomace. Examples include the Croatian / Montenegrin / Serbian lozovača , Cypriot zivania, French marc, Georgian chacha, German Tresterbrand, Greek tsipouro, Hungarian törköly, Italian grappa, Bulgarian grozdova, Portuguese aguardente, Romanian rachiu de...
of Italian origin that contains 35%–60% alcohol by volume
Alcohol by volume
Alcohol by volume is a standard measure of how much alcohol is contained in an alcoholic beverage .The ABV standard is used worldwide....
(70 to 120 US proof). It is similar to Spanish orujo
Orujo
Orujo is the name in north-west Spain for pomace brandy . It is a transparent spirit with an alcohol content over 50%...
, French marc, Georgian
Georgia (country)
Georgia is a sovereign state in the Caucasus region of Eurasia. Located at the crossroads of Western Asia and Eastern Europe, it is bounded to the west by the Black Sea, to the north by Russia, to the southwest by Turkey, to the south by Armenia, and to the southeast by Azerbaijan. The capital of...
chacha
Chacha (liquor)
Chacha is traditionally a clear strong liquor, which is sometimes called "vine vodka," "grape vodka," or "Georgian vodka." Chacha is made of grape pomace...
, Portuguese bagaceira, Greek tsipouro
Tsipouro
Tsipouro is a pomace brandy from Greece and in particular Thessaly , Epirus, Macedonia, Mani Peninsula, and the island of Crete . Tsipouro is a strong distilled spirit containing approximately 45 percent alcohol by volume and is produced from the pomace...
and Bulgarian, Serbian, Croatian (in Istria: rakija and grappa), Romanian tescovină, Albanian, Bosnian, Montenegrin, and Turkish rakia
Rakia
Rakia is an alcoholic beverage that is produced by distillation of fermented fruit; it is a popular beverage throughout the Balkans. Its alcohol content is normally 40% ABV, but home-produced rakia can be stronger . Prepečenica is double-distilled rakia which has an alcohol content that may...
/rakı
Raki
-Alcoholic beverages:*Rakı, an anise-flavored spirit popular in Turkey*Any anise-flavored drink.-Fictional characters:*Raki, a character in the manga/anime series Claymore*Raki, a character in the game Ar tonelico II: Melody of Metafalica...
.

The flavour of grappa, like that of wine
Wine
Wine is an alcoholic beverage, made of fermented fruit juice, usually from grapes. The natural chemical balance of grapes lets them ferment without the addition of sugars, acids, enzymes, or other nutrients. Grape wine is produced by fermenting crushed grapes using various types of yeast. Yeast...
, depends on the type and quality of the grapes used, as well as the specifics of the distillation process.

Grappa is made by distilling
Distillation
Distillation is a method of separating mixtures based on differences in volatilities of components in a boiling liquid mixture. Distillation is a unit operation, or a physical separation process, and not a chemical reaction....
the skins, pulp, seeds, and stems (i.e., the pomace
Pomace
Pomace , or marc , is the solid remains of grapes, olives, or other fruit after pressing for juice or oil. It contains the skins, pulp, seeds, and stems of the fruit....
) left over from winemaking
Winemaking
Winemaking, or vinification, is the production of wine, starting with selection of the grapes or other produce and ending with bottling the finished wine. Although most wine is made from grapes, it may also be made from other fruit or non-toxic plant material...
after pressing the grapes. It was originally made to prevent waste by using these leftovers. A similar drink, known as acquavite d'uva, is made by distilling whole must
Must
Must is freshly pressed fruit juice that contains the skins, seeds, and stems of the fruit. The solid portion of the must is called pomace; it typically makes up 7%–23% of the total weight of the must. Making must is the first step in winemaking...
.


Criterion (2) rules out the direct fermentation of pure grape juice, which is the method used to produce brandy
Brandy
Brandy is a spirit produced by distilling wine. Brandy generally contains 35%–60% alcohol by volume and is typically taken as an after-dinner drink...
.

Criterion (3) has two important implications. First, the distillation must occur on solids. Thus, it is carried out not with a direct flame but with a bain-marie
Bain-marie
A bain-marie is a French term for a piece of equipment used in science, industry, and cooking to heat materials gently and gradually to fixed temperatures, or to keep materials warm over a period of time.- Description :...
or steam distillation; otherwise, the pomace may burn. Second, the woody parts of the grapes (the stems and seeds) are co-fermented with the sugar-rich juice; this produces methanol
Methanol
Methanol, also known as methyl alcohol, wood alcohol, wood naphtha or wood spirits, is a chemical with the formula CH3OH . It is the simplest alcohol, and is a light, volatile, colorless, flammable liquid with a distinctive odor very similar to, but slightly sweeter than, ethanol...
, which is toxic. The methanol must be carefully removed during distillation. That is why there is an Italian law requiring winemakers to sell their pomace to grappa makers; this is a measure that was taken against moonshine
Moonshine
Moonshine is an illegally produced distilled beverage...
operations, which are now very rare in Italy.

One legend tells that a Roman soldier first distilled grappa in the northern Italian town of Bassano del Grappa
Bassano del Grappa
Bassano del Grappa is a city and comune in the province of Vicenza, region Veneto, in northern Italy. It bounds the communes of Cassola, Marostica, Solagna, Pove del Grappa, Romano d'Ezzelino, Campolongo sul Brenta, Conco, Rosà, Cartigliano and Nove...
using distilling equipment stolen in Egypt (“Crisiopea di Cleopatra” 2nd century AD); however, this equipment cannot produce grappa. However, distillation
Distillation
Distillation is a method of separating mixtures based on differences in volatilities of components in a boiling liquid mixture. Distillation is a unit operation, or a physical separation process, and not a chemical reaction....
useful for producing beverages was not discovered until the eighth century, and it likely took about two more centuries for the technology to travel from its home in the Levant
Levant
The Levant or ) is the geographic region and culture zone of the "eastern Mediterranean littoral between Anatolia and Egypt" . The Levant includes most of modern Lebanon, Syria, Jordan, Israel, the Palestinian territories, and sometimes parts of Turkey and Iraq, and corresponds roughly to the...
and Persia to Italy (likely by route of the Crusades
Crusades
The Crusades were a series of religious wars, blessed by the Pope and the Catholic Church with the main goal of restoring Christian access to the holy places in and near Jerusalem...
).
Around 1300-1400 AD, however, the introduction of water as a coolant in the distilling equipment made it possible to produce a substantially larger amount of distilled wine and to distill pomace. Around 1600 AD, the Jesuits in Spain, Italy and Germany studied and codified the techniques used to produce brandy or grappa, and their methods were used until recent times.

In Italy
Italy
Italy , officially the Italian Republic languages]] under the European Charter for Regional or Minority Languages. In each of these, Italy's official name is as follows:;;;;;;;;), is a unitary parliamentary republic in South-Central Europe. To the north it borders France, Switzerland, Austria and...
, grappa is primarily served as a digestivo or after-dinner drink. Its main purpose was to aid in the digestion of heavy meals. Grappa may also be added to espresso
Espresso
Espresso is a concentrated beverage brewed by forcing a small amount of nearly boiling water under pressure through finely ground coffee. Espresso is widely known throughout the world....
coffee to create a caffè corretto
Caffè corretto
Caffè corretto, an Italian beverage, consists of a shot of espresso "corrected" with a shot of liquor, usually grappa, and sometimes sambuca or brandy. It is also known as an "espresso corretto"...
, meaning "corrected coffee". Another variation of this is the ammazzacaffè
Ammazzacaffè
Ammazzacaffè is a small glass of liqueur usually consumed after coffee to dull its taste. It is a common Italian custom, especially after a generous tasty festive meal....
("coffee-killer"): the espresso is drunk first, followed by a few ounces of grappa served in its own glass. In the Veneto, there is resentin ("little rinser"): after finishing a cup of espresso with sugar, a few drops of grappa are poured into the nearly empty cup, swirled and drunk down in one sip.

Among the best-known producers of grappa are Nonino
Nonino
Nonino is a small company that is one of the most famous Italian producers of grappa. Nonino is also the name of the family which owns and run the brand Nonino Grappa...
, Bocchino, Berta, Sibona, Nardini
Nardini (grappa)
Aquavite Nardini has been produced and bottled in Bassano del Grappa, in the northeastern part of Italy, since 1779. The founder of Italy’s most traditional distillery was Bortolo Nardini who purchased in April of that year, an Inn at the eastern entrance of the famous wooden covered Bassano...
, Jacopo Poli
Jacopo Poli
Poli Distillerie is an artisan Grappa distillery solely owned by the Poli family, founded in 1898 in Schiavon, near Bassano del Grappa, in the hearth of Veneto, Italy...
, Brotto, Domenis, Bepi Tosolini and Distilleria De Negri. These grappas are produced in significant quantities and are exported; there are also many small local or regional grappas.

Most grappa is clear, indicating it is an unaged distillate, though some may retain very faint pigments from their original fruit pomace. Lately, aged grappas have become more common, and these take on a yellow, or red-brown hue from the barrels in which they are stored.

Grappa tastings invariably begin with young grappas, then continue with cask-conditioned and aromatic grappas and finish with aromatized grappas.

After each tasting, and before sampling another glass, some tasters recommended drinking half a glass of milk to refresh the taste receptors on the tongue.

Another way to "taste" grappa is by rubbing a small amount on the back of the hand and sniffing. If the aroma is pleasant, the grappa is well made. Impurities in grappa come out in the vapor and can be easily distinguished in this way.

Various other food products can help stop taste characteristics of one grappa "dragging" or carrying over to the next. Foods effective in this role, and that also provide an agreeable accompaniment to grappa's own flavour include:

With the introduction of “boutique
Boutique
A boutique is a small shopping outlet, especially one that specializes in elite and fashionable items such as clothing and jewelry. The word is French for "shop", via Latin from Greek ἀποθήκη , "storehouse"....
” grappas, elaborate flute glasses have been promoted; traditionalists continue to taste grappa in the age-old shot glass
Shot glass
A shot glass is a small glass designed to hold or measure spirits or liquor, which is either drunk straight from the glass or poured into a mixed drink....
.