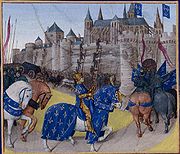 The Grandes Chroniques de France is a royal compilation of the history of France
France
The French Republic , The French Republic , The French Republic , (commonly known as France , is a unitary semi-presidential republic in Western Europe with several overseas territories and islands located on other continents and in the Indian, Pacific, and Atlantic oceans. Metropolitan France...
, its manuscripts remarkably illuminated. It was compiled between the thirteenth and fifteenth centuries, beginning in the reign of Saint Louis
Louis IX of France
Louis IX , commonly Saint Louis, was King of France from 1226 until his death. He was also styled Louis II, Count of Artois from 1226 to 1237. Born at Poissy, near Paris, he was an eighth-generation descendant of Hugh Capet, and thus a member of the House of Capet, and the son of Louis VIII and...
, who wished to preserve the history of the Franks from the coming of the Trojans
Troy
Troy was a city, both factual and legendary, located in northwest Anatolia in what is now Turkey, southeast of the Dardanelles and beside Mount Ida...
to his own time, in an "official" chronography whose dissemination was tightly controlled. It was continued under his successors until completed in 1461. It covers the Merovingian, Carolingian
Carolingian
The Carolingian dynasty was a Frankish noble family with origins in the Arnulfing and Pippinid clans of the 7th century AD. The name "Carolingian", Medieval Latin karolingi, an altered form of an unattested Old High German *karling, kerling The Carolingian dynasty (known variously as the...
, and Direct Capetian
House of Capet
The House of Capet, or The Direct Capetian Dynasty, , also called The House of France , or simply the Capets, which ruled the Kingdom of France from 987 to 1328, was the most senior line of the Capetian dynasty – itself a derivative dynasty from the Robertians. As rulers of France, the dynasty...
dynasties of French kings, with illustrations depicting personages and events from virtually all their reigns.

The Grandes Chroniques de France had its origin as a French translation of the Latin histories written and updated by the monks of Saint-Denis
Saint Denis Basilica
The Cathedral Basilica of Saint Denis is a large medieval abbey church in the commune of Saint-Denis, now a northern suburb of Paris. The abbey church was created a cathedral in 1966 and is the seat of the Bishop of Saint-Denis, Pascal Michel Ghislain Delannoy...
, who were, from the thirteenth century, official historiographers to the French kings. As first written, the Grandes Chroniques traced the history of the French kings from their origins in Troy to the death of Philip Augustus (1223). The continuations of the text were drafted first at Saint-Denis and then at the court in Paris. Its final form brought the chronicle down to the death of Charles V
Charles V of France
Charles V , called the Wise, was King of France from 1364 to his death in 1380 and a member of the House of Valois...
in the 1380s.

Sources for material on the reign of Charlemagne
Charlemagne
Charlemagne was King of the Franks from 768 and Emperor of the Romans from 800 to his death in 814. He expanded the Frankish kingdom into an empire that incorporated much of Western and Central Europe. During his reign, he conquered Italy and was crowned by Pope Leo III on 25 December 800...
included the Historia Caroli Magni
Historia Caroli Magni
Historia Caroli Magni or Historia Karoli Magni et Rotholandi , sometimes known as the Pseudo-Turpin Chronicle, is a 12th century Latin forged chronicle of legendary material about Charlemagne's alleged conquest of Spain...
, also known as the "Pseudo-Turpin Chronicle" and the Vita Karoli Magni
Vita Karoli Magni
Vita Karoli Magni is a biography of Charlemagne, King of the Franks and Holy Roman Emperor, written by Einhard.-Literary context:...
by Einhard
Einhard
Einhard was a Frankish scholar and courtier. Einhard was a dedicated servant of Charlemagne and his son Louis the Pious; his main work is a biography of Charlemagne, the Vita Karoli Magni, "one of the most precious literary bequests of the early Middle Ages."-Public life:Einhard was from the eastern...
. Other sources included Abbot Suger
Abbot Suger
Suger was one of the last Frankish abbot-statesmen, an historian, and the influential first patron of Gothic architecture....
's Life of Louis IV.

It survives in approximately 130 manuscripts, varying in the richness, number and artistic style of their illuminations, copied and amended for royal and courtly patrons, the central work of vernacular official historiography. Especially fine are the lavishly illustrated copies made for Charles V
Charles V of France
Charles V , called the Wise, was King of France from 1364 to his death in 1380 and a member of the House of Valois...
(BnF
BNF
BNF may stand for:In science:*Biological nitrogen fixation, a process that converts nitrogen in the atmosphere to ammonia*British National Formulary, the standard drug reference manual**British National Formulary for Children...
, Ms. Fr. 2813), Louis VII
Louis VII of France
Louis VII was King of France, the son and successor of Louis VI . He ruled from 1137 until his death. He was a member of the House of Capet. His reign was dominated by feudal struggles , and saw the beginning of the long rivalry between France and England...
, illuminated by Jean Fouquet
Jean Fouquet
Jean Fouquet was a preeminent French painter of the 15th century, a master of both panel painting and manuscript illumination, and the apparent inventor of the portrait miniature. He was the first French artist to travel to Italy and experience at first hand the Italian Early...
(1455-1460, BnF, Ms. Fr. 6465, above) and Philip the Good of Burgundy, now in the Russian National Library
Russian National Library
The National Library of Russia in St Petersburg, known as the State Public Saltykov-Shchedrin Library from 1932 to 1992 , is the oldest public library in Russia...
, Saint Petersburg
Saint Petersburg
Saint Petersburg is a city and a federal subject of Russia located on the Neva River at the head of the Gulf of Finland on the Baltic Sea...
(1457, above). For the first 150 years of the Grandes Chroniquess existence, its audience was carefully circumscribed: its readership was centered in the royal court at Paris, and its owners included French kings, members of the royal family and the court, and a few highly-connected clerics in northern France. During this period, there were no copies of the work that belonged to members of the Parlement
Parlement
Parlements were regional legislative bodies in Ancien Régime France.The political institutions of the Parlement in Ancien Régime France developed out of the previous council of the king, the Conseil du roi or curia regis, and consequently had ancient and customary rights of consultation and...
or the university community.