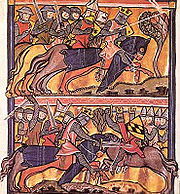 Vita Karoli Magni is a biography of Charlemagne
Charlemagne
Charlemagne was King of the Franks from 768 and Emperor of the Romans from 800 to his death in 814. He expanded the Frankish kingdom into an empire that incorporated much of Western and Central Europe. During his reign, he conquered Italy and was crowned by Pope Leo III on 25 December 800...
, King of the Franks and Holy Roman Emperor
Holy Roman Emperor
The Holy Roman Emperor is a term used by historians to denote a medieval ruler who, as German King, had also received the title of "Emperor of the Romans" from the Pope...
, written by Einhard
Einhard
Einhard was a Frankish scholar and courtier. Einhard was a dedicated servant of Charlemagne and his son Louis the Pious; his main work is a biography of Charlemagne, the Vita Karoli Magni, "one of the most precious literary bequests of the early Middle Ages."-Public life:Einhard was from the eastern...
.

Historians have traditionally described the work as the first example of a biography of a European king. The author endeavored to imitate the style of that of the ancient Roman biographer Suetonius, most famous for his work the Twelve Caesars. Einhard's biography is especially modeled after the biography of Emperor Augustus, the first emperor of the Roman Empire.

The date of the work is uncertain and a number of theories have been put forward. The inclusion of Charlemagne's will at the end of the work makes it fairly clear that it was written after his death in 814. The first reference to the work, however, comes in a letter to Einhard from Lupus of Ferrieres
Lupus Servatus
Lupus Servatus, also Servatus Lupus , in French Loup , was a Carolingian Benedictine abbot of Ferrières, member of Charles the Bald's court and noted theological author of the ninth century...
which is dated to the mid-ninth century. Dates have been suggested ranging from about 817 to 833, usually based on interpretations of the text in the political context of the first years of the reign of Louis the Pious
Louis the Pious
Louis the Pious , also called the Fair, and the Debonaire, was the King of Aquitaine from 781. He was also King of the Franks and co-Emperor with his father, Charlemagne, from 813...
and Louis' attitude to his father. No theory has yet emerged as an obvious front runner, and it is likely that debate will continue. 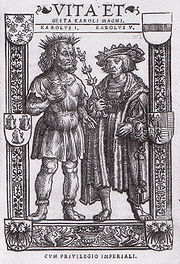 Einhard's position while with Charlemagne was that of a modern day minister of public works
Public works
Public works are a broad category of projects, financed and constructed by the government, for recreational, employment, and health and safety uses in the greater community...
, so he had intimate knowledge of his court. Einhard was also given the responsibility of many of Charlemagne's abbeys
Abbey
An abbey is a Catholic monastery or convent, under the authority of an Abbot or an Abbess, who serves as the spiritual father or mother of the community.The term can also refer to an establishment which has long ceased to function as an abbey,...
. It used to be suggested that Einhard's wife Emma was a daughter of Charlemagne; this can generally be disregarded as a twelfth-century fabrication, however, since there is no proof.

Most biographies of the Middle Ages
Middle Ages
The Middle Ages is a periodization of European history from the 5th century to the 15th century. The Middle Ages follows the fall of the Western Roman Empire in 476 and precedes the Early Modern Era. It is the middle period of a three-period division of Western history: Classic, Medieval and Modern...
related only good deeds of their subject with many embellishments to improve their subject. Einhard's biography, however, is considered on the most part to be a trustworthy account of Charlemagne's life. It is considered an excellent account of earlier Medieval life. Despite Einhard's limitations, since this was his first attempt at a major writing, the British historian Thomas Hodgkin
Thomas Hodgkin (historian)
Thomas Hodgkin , British historian, son of John Hodgkin , barrister and Quaker minister, and Elizabeth Howard ....
said, "almost all our real, vivifying knowledge of Charles the Great is derived from Einhard, and that the Vita Karoli Magni is one of the most precious literary bequests of the early Middle Ages."