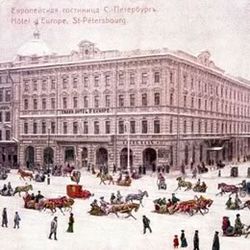 Grand Hotel Europe vies with Corinthia Nevskij Palace Hotel and Hotel Astoria
Hotel Astoria
Hotel Astoria is a five-star hotel in Saint Petersburg, Russia opened in 1912. It has 213 bedrooms, including 52 suites.It is located on Saint Isaac's Square, next to Saint Isaac's Cathedral and across from the historic Imperial German Embassy...
for the title of the most luxurious five-star hotel
Hotel
A hotel is an establishment that provides paid lodging on a short-term basis. The provision of basic accommodation, in times past, consisting only of a room with a bed, a cupboard, a small table and a washstand has largely been replaced by rooms with modern facilities, including en-suite bathrooms...
in Saint Petersburg
Saint Petersburg
Saint Petersburg is a city and a federal subject of Russia located on the Neva River at the head of the Gulf of Finland on the Baltic Sea...
, Russia
Russia
Russia or , officially known as both Russia and the Russian Federation , is a country in northern Eurasia. It is a federal semi-presidential republic, comprising 83 federal subjects...
.

One of great hotels of the 19th-century Europe
Europe
Europe is, by convention, one of the world's seven continents. Comprising the westernmost peninsula of Eurasia, Europe is generally 'divided' from Asia to its east by the watershed divides of the Ural and Caucasus Mountains, the Ural River, the Caspian and Black Seas, and the waterways connecting...
, it opened its doors to the public on January 28, 1875, replacing an earlier inn situated on the same site. Its marble-and-gilt interiors, sweeping staircases and elegant furniture attracted crowds of well-to-do visitors, including Ivan Turgenev
Ivan Turgenev
Ivan Sergeyevich Turgenev was a Russian novelist, short story writer, and playwright. His first major publication, a short story collection entitled A Sportsman's Sketches, is a milestone of Russian Realism, and his novel Fathers and Sons is regarded as one of the major works of 19th-century...
, Peter Ilyich Tchaikovsky, Claude Debussy
Claude Debussy
Claude-Achille Debussy was a French composer. Along with Maurice Ravel, he was one of the most prominent figures working within the field of impressionist music, though he himself intensely disliked the term when applied to his compositions...
, H.G. Wells, Igor Stravinsky
Igor Stravinsky
Igor Fyodorovich Stravinsky ; 6 April 1971) was a Russian, later naturalized French, and then naturalized American composer, pianist, and conductor....
, Gustav V of Sweden, Elton John
Elton John
Sir Elton Hercules John, CBE, Hon DMus is an English rock singer-songwriter, composer, pianist and occasional actor...
, Jacques Chirac
Jacques Chirac
Jacques René Chirac is a French politician who served as President of France from 1995 to 2007. He previously served as Prime Minister of France from 1974 to 1976 and from 1986 to 1988 , and as Mayor of Paris from 1977 to 1995.After completing his studies of the DEA's degree at the...
, to name only a few notables who lodged there.

In the 1910s, the hotel was remodelled in the Art Nouveau
Art Nouveau
Art Nouveau is an international philosophy and style of art, architecture and applied art—especially the decorative arts—that were most popular during 1890–1910. The name "Art Nouveau" is French for "new art"...
style to designs by Fyodor Lidval
Fyodor Lidval
Fyodor Ivanovich Lidval was a Russian architect of Swedish ethnicity.-Life:Lidval was born in St. Petersburg into a family of Russified Swedes. In 1882 he attended elementary school at the Swedish Church of St. Catherine, and then the second Petersburg Technical High School in 1888...
and Leon Benois
Leon Benois
Leon Benois was a Russian architect. He was the son of architect Nicholas Benois, the brother of artists Alexandre Benois and Albert Benois, and the grandfather of the actor Sir Peter Ustinov...
. The latest major renovation was carried on between 1989 and 1991.

The hotel was featured in the 1995 James Bond movie, GoldenEye
GoldenEye
GoldenEye is the seventeenth spy film in the James Bond series, and the first to star Pierce Brosnan as the fictional MI6 agent James Bond. The film was directed by Martin Campbell and is the first film in the series not to take story elements from the works of novelist Ian Fleming...
. However, none of the movie was shot at the hotel, the exterior used was actually the Langham Hotel in London, while the interiors were sets.