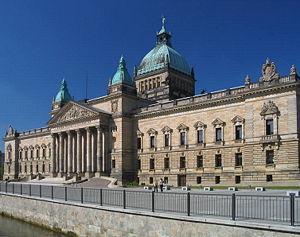 The Reichsgericht was the highest court of the Deutsches Reich
Deutsches Reich
Deutsches Reich was the official name for Germany from 1871 to 1945 in the German language.As the literal English translation "German Empire" denotes a monarchy, the term is used only in reference to Germany prior to the fall of the monarchies at the end of World War I in 1918...
. It was established on October 1, 1879 when the Reichsjustizgesetze came into effect, building a widely regarded body of jurisprudence.

During the rise of the Nazi regime, the Reichsgericht was enlisted to support the Nazi agenda. During and after the Nazi period, it received criticism for the ease, and even willingness, with which it transitioned. It provided the highest level of formal legal justification for Nazi programs. Immediately after the end of World War II
World War II
World War II, or the Second World War , was a global conflict lasting from 1939 to 1945, involving most of the world's nations—including all of the great powers—eventually forming two opposing military alliances: the Allies and the Axis...
the Reichsgericht was dissolved, and reformed into the German High Court for the Unified Economic Region, the occupation zones of France, the United Kingdom and the United States.

Located in Leipzig, Saxony, Germany, the Reichsgericht building was designed by Ludwig Hoffmann and Peter Dybwad, and construction was completed in 1895. It is designed in the Italian renaissance style
Renaissance architecture
Renaissance architecture is the architecture of the period between the early 15th and early 17th centuries in different regions of Europe, demonstrating a conscious revival and development of certain elements of ancient Greek and Roman thought and material culture. Stylistically, Renaissance...
and features two large courtyards, a central cupola and a large portico at the entrance.

After the reunification, the former Reichsgericht building in Leipzig
Leipzig
Leipzig Leipzig has always been a trade city, situated during the time of the Holy Roman Empire at the intersection of the Via Regia and Via Imperii, two important trade routes. At one time, Leipzig was one of the major European centres of learning and culture in fields such as music and publishing...
was made the seat of the Bundesverwaltungsgericht.
The source of this article is wikipedia, the free encyclopedia.  The text of this article is licensed under the GFDL.