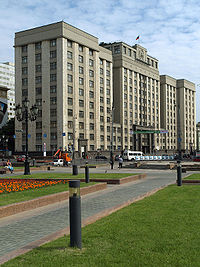 The agency was formed on 22 February 1921 as the "RSFSR State Planning Commission", by decree
Decree
A decree is a rule of law issued by a head of state , according to certain procedures . It has the force of law...
of the Russian Soviet Federative Socialist Republic
Russian Soviet Federative Socialist Republic
The Russian Soviet Federative Socialist Republic , commonly referred to as Soviet Russia, Bolshevik Russia, or simply Russia, was the largest, most populous and economically developed republic in the former Soviet Union....
's Sovnarkom. The GOELRO plan
GOELRO plan
GOELRO plan was the first-ever Soviet plan for national economic recovery and development. It became the prototype for subsequent Five-Year Plans drafted by Gosplan...
, the first large-scale Soviet plan to recover the Russian economy, was first to test Gosplan. After the creation of the Union of Soviet Socialist Republics, the USSR State Planning Commission of the USSR Council of Labour and Defence  was established on 21 August 1923. The abbreviation "Gosplan" has been used since 1921.

Initially Gosplan had an advisory function. Its primary objective was the co-ordination of the economic plans of Union republics and the creation of the common Union plan. During 1925 Gosplan started creating annual economic plans, known as "control numbers" .

Its work was coordinated with the USSR Central Statistical Directorate , the Narkomat of Finance, and the All-Union Council of State Economy , and later with Gosbank
Gosbank
Gosbank was the central bank of the Soviet Union and the only bank whatsoever in the entire Union from the 1930s until the year 1987. Gosbank was one of the three Soviet economic authorities, the other two being "Gosplan" and "Gossnab"...
and Gossnab
Gossnab
Gossnab of USSR, State Supplies of the USSR was active in 1948-1953, 1965-1991. It was the state committee for material technical supply in the Soviet Union...
.

During 1930 the Statistical Directorate was merged into Gosplan, and on 3 February 1931 Gosplan was resubordinated to the Sovnarkom.

During May 1955 Gosplan was divided into two commissions: the USSR Council of Ministers State Commission for Advanced Planning , and the USSR Council of Ministers Economic Commission on Current Planning . These were, respectively, tasked with predictive and immediate planning. The work of the latter was based on the five-year plans delivered by Gosplan, with Gosplan planning 10–15 years ahead.

Gosplan was headquartered at the building now occupied by the State Duma, in Moscow
Moscow
Moscow is the capital, the most populous city, and the most populous federal subject of Russia. The city is a major political, economic, cultural, scientific, religious, financial, educational, and transportation centre of Russia and the continent...
.

During May 1921, with the introduction of the New Economic Policy
New Economic Policy
The New Economic Policy was an economic policy proposed by Vladimir Lenin, who called it state capitalism. Allowing some private ventures, the NEP allowed small animal businesses or smoke shops, for instance, to reopen for private profit while the state continued to control banks, foreign trade,...
, Gosplan's Council of Labour and Defense established the Regionalisation Committee, tasked with developing a plan for the economic-administrative organisation of the RSFSR. Composed largely of technical staff - professional engineers and economists from imperialist
Russian Empire
The Russian Empire was a state that existed from 1721 until the Russian Revolution of 1917. It was the successor to the Tsardom of Russia and the predecessor of the Soviet Union...
times, it was directed by Ivan Gavrilovich Alexandrov, former member of the State Commission for the Electrification of Russia
GOELRO plan
GOELRO plan was the first-ever Soviet plan for national economic recovery and development. It became the prototype for subsequent Five-Year Plans drafted by Gosplan...
, but not however a member of the Bolshevik Party. The commission examined alternatives of ethno-territorial regionalisation, discussing the topic with the People's Commissariat of Agriculture, the Central Statistical Directorate and the Supreme Soviet
All-Russian Central Executive Committee
All-Russian Central Executive Committee , was the highest legislative, administrative, and revising body of the Russian Soviet Federative Socialist Republic. Although the All-Russian Congress of Soviets had supreme authority, in periods between its sessions its powers were passed to VTsIK...
(VTsIK) Administrative Commission.

The introduction of the first five year plan in 1928 led to a re-examination of the roles of Gosplan and VSNKh, the supreme state organization for management of the economy at this time. This re-examination of roles was required because VSNKh itself also had responsibility for planning through the Industrial Planning Commission (Promplan). Re-examination of roles was also required as the introduction of the first five year plan meant that Gosplan's role was no longer one of prognosis and drafting of 'control figures' since plans had now become orders to act.

In order to ensure the success of the plan it was necessary to ensure that inputs from one part of the economy matched outputs from another part of the economy. Gosplan achieved this using a methodology called the system of 'material balances'. For a plan period (in detail for one year and in lesser detail for a five year plan) Gosplan drew up a balance sheet in terms of units of material (i.e. money was not used as part of the accounting process).

The first step in the process was to assess how much steel, cement, wool cloth, etc... would be available for the next year. This calculation was based on the following formula: production minus exports plus imports plus or minus changes in stocks).

Using this method any changes in the plan to remove mismatches between inputs and outputs would result in hundreds, even thousands, of changes to material balances. This meant that, without the aid of information technology, Gosplan could only deal with the economy in very general terms.