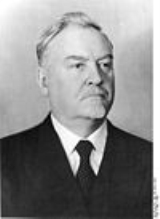 Bulganin was born in Nizhny Novgorod
Nizhny Novgorod
Nizhny Novgorod , colloquially shortened to Nizhny, is, with the population of 1,250,615, the fifth largest city in Russia, ranking after Moscow, St. Petersburg, Novosibirsk, and Yekaterinburg...
, the son of an office worker. He joined the Bolshevik Party
Communist Party of the Soviet Union
The Communist Party of the Soviet Union was the only legal, ruling political party in the Soviet Union and one of the largest communist organizations in the world...
in 1917, and in 1918 he was recruited into the Cheka
Cheka
Cheka was the first of a succession of Soviet state security organizations. It was created by a decree issued on December 20, 1917, by Vladimir Lenin and subsequently led by aristocrat-turned-communist Felix Dzerzhinsky...
, the Bolshevik regime's political police, where he served until 1922. After the Russian Civil War
Russian Civil War
The Russian Civil War was a multi-party war that occurred within the former Russian Empire after the Russian provisional government collapsed to the Soviets, under the domination of the Bolshevik party. Soviet forces first assumed power in Petrograd The Russian Civil War (1917–1923) was a...
he became an industrial manager, working in the electricity administration until 1927, and as director of the Moscow
Moscow
Moscow is the capital, the most populous city, and the most populous federal subject of Russia. The city is a major political, economic, cultural, scientific, religious, financial, educational, and transportation centre of Russia and the continent...
electricity supply in 1927–31. From 1931 to 1937 he was chairman of the executive committee of the Moscow City Soviet.

In 1934 the Communist Party's XVII Party Congress elected Bulganin a candidate member of the Central Committee
Central Committee
Central Committee was the common designation of a standing administrative body of communist parties, analogous to a board of directors, whether ruling or non-ruling in the twentieth century and of the surviving, mostly Trotskyist, states in the early twenty first. In such party organizations the...
. A loyal Stalinist, he was promoted rapidly as other leaders fell victim to Joseph Stalin
Joseph Stalin
Joseph Vissarionovich Stalin was the Premier of the Soviet Union from 6 May 1941 to 5 March 1953. He was among the Bolshevik revolutionaries who brought about the October Revolution and had held the position of first General Secretary of the Communist Party of the Soviet Union's Central Committee...
's Great Purge
Great Purge
The Great Purge was a series of campaigns of political repression and persecution in the Soviet Union orchestrated by Joseph Stalin from 1936 to 1938...
of 1937–38. In July 1937 he was appointed Prime Minister of the Russian Republic (RSFSR). He became a full member of the Central Committee later that year, and in September 1938 he became Deputy Prime Minister of the Soviet Union
Soviet Union
The Soviet Union , officially the Union of Soviet Socialist Republics , was a constitutionally socialist state that existed in Eurasia between 1922 and 1991....
, and also head of the State Bank of the USSR.

After Stalin's death in March 1953, Bulganin moved into the first rank of the Soviet leadership, being appointed to the key post of Defense Minister. He was an ally of Nikita Khrushchev
Nikita Khrushchev
Nikita Sergeyevich Khrushchev led the Soviet Union during part of the Cold War. He served as First Secretary of the Communist Party of the Soviet Union from 1953 to 1964, and as Chairman of the Council of Ministers, or Premier, from 1958 to 1964...
during his power struggle with Georgy Malenkov
Georgy Malenkov
Georgy Maximilianovich Malenkov was a Soviet politician, Communist Party leader and close collaborator of Joseph Stalin. After Stalin's death, he became Premier of the Soviet Union and was in 1953 briefly considered the most powerful Soviet politician before being overshadowed by Nikita...
, and in February 1955 he succeeded Malenkov as Premier of the Soviet Union
Premier of the Soviet Union
The office of Premier of the Soviet Union was synonymous with head of government of the Union of Soviet Socialist Republics . Twelve individuals have been premier...
. He was generally seen as a supporter of Khrushchev's programme of reform and destalinization. He and Khrushchev travelled together to India
India
India , officially the Republic of India , is a country in South Asia. It is the seventh-largest country by geographical area, the second-most populous country with over 1.2 billion people, and the most populous democracy in the world...
, Yugoslavia
Yugoslavia
Yugoslavia refers to three political entities that existed successively on the western part of the Balkans during most of the 20th century....
and Britain, where they were known in the press as "the B and K show." During the Suez Crisis
Suez Crisis
The Suez Crisis, also referred to as the Tripartite Aggression, Suez War was an offensive war fought by France, the United Kingdom, and Israel against Egypt beginning on 29 October 1956. Less than a day after Israel invaded Egypt, Britain and France issued a joint ultimatum to Egypt and Israel,...
he sent letters to the governments of the United Kingdom
United Kingdom
The United Kingdom of Great Britain and Northern IrelandIn the United Kingdom and Dependencies, other languages have been officially recognised as legitimate autochthonous languages under the European Charter for Regional or Minority Languages...
, France
France
The French Republic , The French Republic , The French Republic , (commonly known as France , is a unitary semi-presidential republic in Western Europe with several overseas territories and islands located on other continents and in the Indian, Pacific, and Atlantic oceans. Metropolitan France...
and Israel
Israel
The State of Israel is a parliamentary republic located in the Middle East, along the eastern shore of the Mediterranean Sea...
threatening rocket attacks on London, Paris and Tel Aviv if they did not withdraw their forces from Egypt. However, many historians believe this was simply a bluff.

By 1957, however, Bulganin had come to share the doubts held about Khrushchev's reformist policies by the conservative group (the so-called "Anti-Party Group
Anti-Party Group
The Anti-Party Group was a group within the leadership of the Communist Party of the Soviet Union that unsuccessfully attempted to depose Nikita Khrushchev as First Secretary of the Party in May 1957. The group, named by that epithet by Khrushchev, was led by former Premiers Georgy Malenkov and...
") led by Vyacheslav Molotov
Vyacheslav Molotov
Vyacheslav Mikhailovich Molotov was a Soviet politician and diplomat, an Old Bolshevik and a leading figure in the Soviet government from the 1920s, when he rose to power as a protégé of Joseph Stalin, to 1957, when he was dismissed from the Presidium of the Central Committee by Nikita Khrushchev...
. In June, when the conservatives tried to remove Khrushchev from power at a meeting of the Politburo, Bulganin vacillated between the two camps. When the conservatives were defeated and removed from power, Bulganin survived for a while, but in March 1958, at a session of the Supreme Soviet of the Soviet Union, Khrushchev forced his resignation. He was appointed chairman of the Soviet
State Bank, a job he had held two decades before, but in September Bulganin was removed from the Central Committee and deprived of the title of Marshal. He was dispatched to Stavropol
Stavropol
-International relations:-Twin towns/sister cities:Stavropol is twinned with: Des Moines, United States Béziers, France Pazardzhik, Bulgaria-External links:* **...
as chairman of Regional Economic Council, a token position, and in February 1960 he was retired on a pension.